Evacuations resume at Kabul airport as Biden defends US pullout 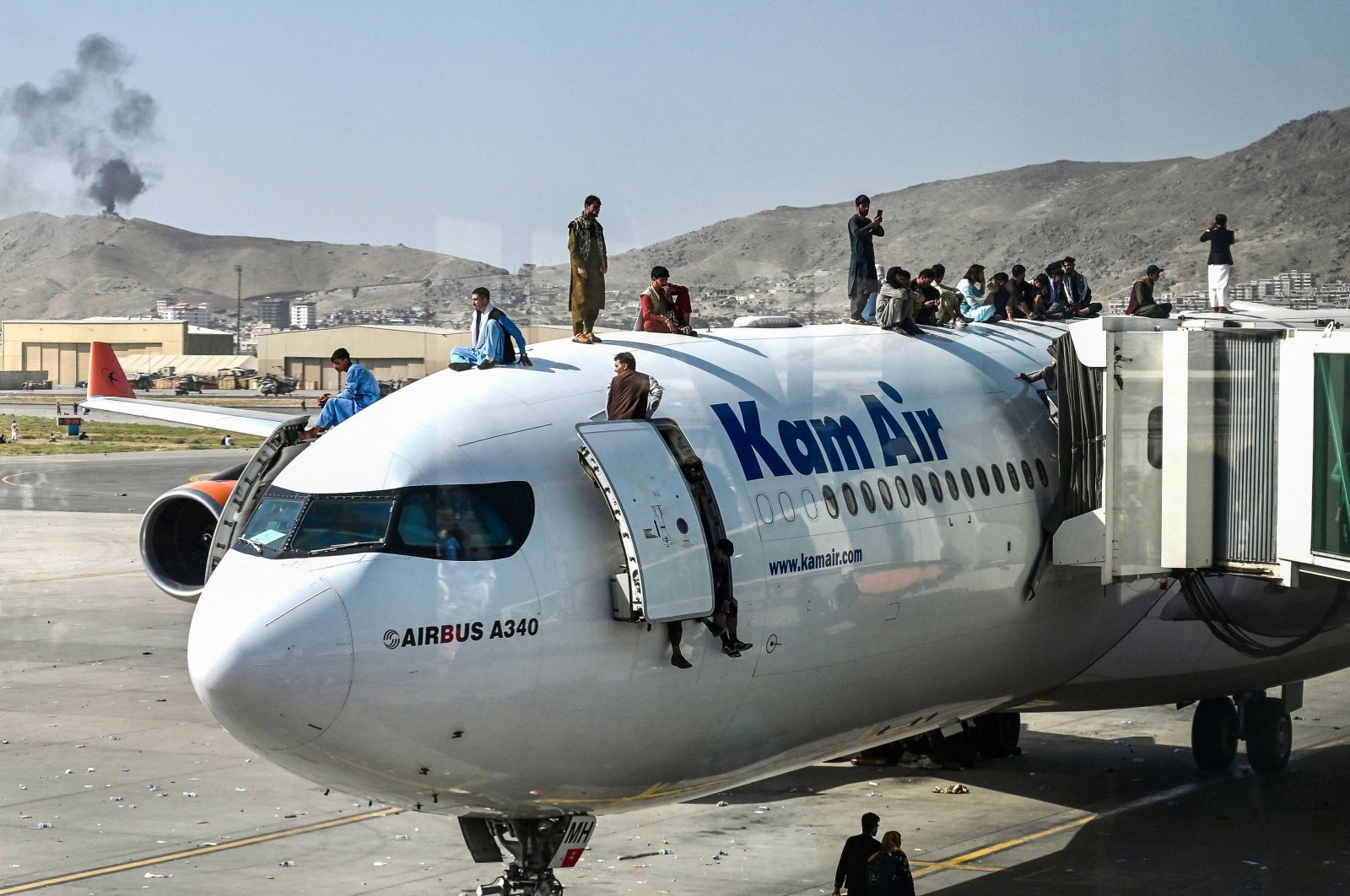 Afghan people climb on top of a plane as they attempt to flee the country after the Taliban entered the capital, at Kabul Hamid Karzai International Airport in Kabul, Afghanistan, Aug. 16, 2021. (AFP Photo)
by DAILY SABAH WITH AGENCIES Aug 17, 2021 8:36 am

As military evacuation flights resumed, the Taliban granted general amnesty to all government officials and called on them to return to work, just a day after U.S. President Joe Biden said he 'fully supports' the withdrawal from the war-torn country

Military flights evacuating diplomats and civilians from Afghanistan resumed early on Tuesday after the runway at Kabul Hamid Karzai International Airport was cleared of thousands of people desperate to flee after the Taliban seized the capital.

Britain's Foreign Minister Dominic Raab issued a similar statement Tuesday, telling Sky News that "the position at the airport is stabilizing" and that the airport's stability is "absolutely key."

Media reported two people fell to their deaths from the underside of a U.S. military aircraft after it took off, crashing to their deaths on roofs of homes near the airport.

A U.S. official told Reuters U.S. troops had killed two gunmen who had appeared to have fired into the crowd at the airport. Despite the scenes of panic and confusion in Kabul, U.S. President Joe Biden defended his decision to withdraw U.S. forces after 20 years of war – the nation's longest – that he described as costing more than $1 trillion. But a video on Monday of hundreds of desperate Afghans trying to clamber onto a U.S. military plane as it was about to take off could haunt the United States, just as a photograph in 1975 of people scrambling to get on a helicopter on the roof of a building in Saigon became emblematic of the humiliating withdrawal from Vietnam.

Biden insisted he had to decide between asking U.S. forces to fight endlessly in what he called Afghanistan's civil war or follow through on an agreement to withdraw negotiated by his predecessor, Republican Donald Trump.

"I stand squarely behind my decision," Biden said. "After 20 years I've learned the hard way that there was never a good time to withdraw U.S. forces. That's why we're still there."

Facing a barrage of criticism, from even his own diplomats, he blamed the Taliban's takeover on Afghan political leaders who fled and its army's unwillingness to fight. The Taliban captured Afghanistan's biggest cities in days rather than the months predicted by U.S. intelligence, in many cases after demoralized government forces surrendered despite years of training and equipping by the United States and others.

Blinken also spoke on Monday with counterparts in Pakistan, Russia, Britain, the European Union, Turkey and NATO about ensuring regional stability, the State Department said. U.S. Charge d'Affaires Ross Wilson dismissed in a Twitter message what he called false reports that he had left the country, saying he and staff remained and were helping thousands of U.S. citizens and Afghans.

Former U.S. President George W. Bush, who saw the first entrance of American troops to Afghanistan after 9/11, demanded safe passage for Afghan refugees, without "bureaucratic delay." Bush called on his country to carry out the evacuation of Afghans who helped Washington during the war.

“The Afghans now at the greatest risk are the same ones who have been on the forefront of progress inside their nation,” he said in a statement. “The United States government has the legal authority to cut the red tape for refugees during urgent humanitarian crises. And we have the responsibility and the resources to secure safe passage for them now, without bureaucratic delay. Our most stalwart allies, along with private NGOs, are ready to help.”

Afghan President Ashraf Ghani left the country on Sunday as the militants entered Kabul, saying he wanted to avoid bloodshed. The U.N. Security Council called for talks to create a new government in Afghanistan after Secretary-General Antonio Guterres warned of "chilling" curbs on human rights and violations against women and girls.

"I think that Europe will inevitably have to equip itself for humanitarian corridors and organized reception, also to avoid uncontrolled flows of illegal immigrants. Or, at least, the countries that are willing to do so, should," he told Italian daily il Messaggero.

European Union foreign ministers will hold a crisis meeting on Tuesday to discuss the fall of Afghanistan to the Taliban militants.

Many Afghans fear the Taliban will return to past harsh practices. During their 1996-2001 rule, women could not work and punishments such as public stoning, whipping and hanging were administered. Taliban spokesperson Suhail Shaheen told Dunya News that the group would improve the security of Kabul and "respect the rights of women and minorities as per Afghan norms and Islamic values."

Shaheen added the new regime would ensure representation of all ethnicities and that the Taliban were keen to work with the international community to rebuild the country. Shaheen said on Twitter that the group's fighters were under strict orders not to harm anyone.

"Life, property and honor of no one shall be harmed but must be protected by the mujahideen," he said.

The Taliban declared general amnesty to all government officials and urged women to join its government Tuesday, trying to calm nerves across a tense capital city.

"A general amnesty has been declared for all ... so you should start your routine life with full confidence," said a statement from the Taliban, according to Agence France-Presse (AFP).

The comments by Enamullah Samangani, a member of the Taliban's cultural commission, represent the first comments on governance from a federal level across the country after their blitz across the country. While there were no major reports of abuses or fighting in Kabul, many residents have stayed home and remain fearful after the insurgents’ takeover saw prisons emptied and armories looted.

Older generations remember their ultraconservative views, which included stonings, amputations and public executions during their rule before the U.S-led invasion that followed the Sept. 11, 2001 terror attacks.

"The Islamic Emirate doesn't want women to be victims” Samangani said, using the militants' term for Afghanistan. "They should be in government structure according to Shariah law.” He added: "The structure of government is not fully clear, but based on experience, there should be a fully Islamic leadership and all sides should join.”

"Our people are Muslims and we are not here to force them to Islam,” he said, according to remarks carried by The Associated Press (AP).

Under the Taliban, women were largely confined to their homes. The insurgents have sought to project greater moderation in recent years, but many Afghans remain skeptical.

Meanwhile Tuesday, Stefano Pontecorvo, NATO's senior civilian representative to Afghanistan, posted video online showing the runway empty with American troops on the tarmac. What appeared to be a military cargo plane could be seen in the distance from behind a chain-link fence in the footage. The runway "is open,” he wrote on Twitter. "I see airplanes landing and taking off.”

Overnight, flight-tracking data showed a U.S. Marine Corps KC-130J Hercules plane at the airport and later taking off for Qatar, home to Al-Udeid Air Base and the U.S. military Central Command's forward headquarters. There were no other immediate flights seen in Afghan airspace, which has been taken over by the American military as commercial flights have been halted in the country.