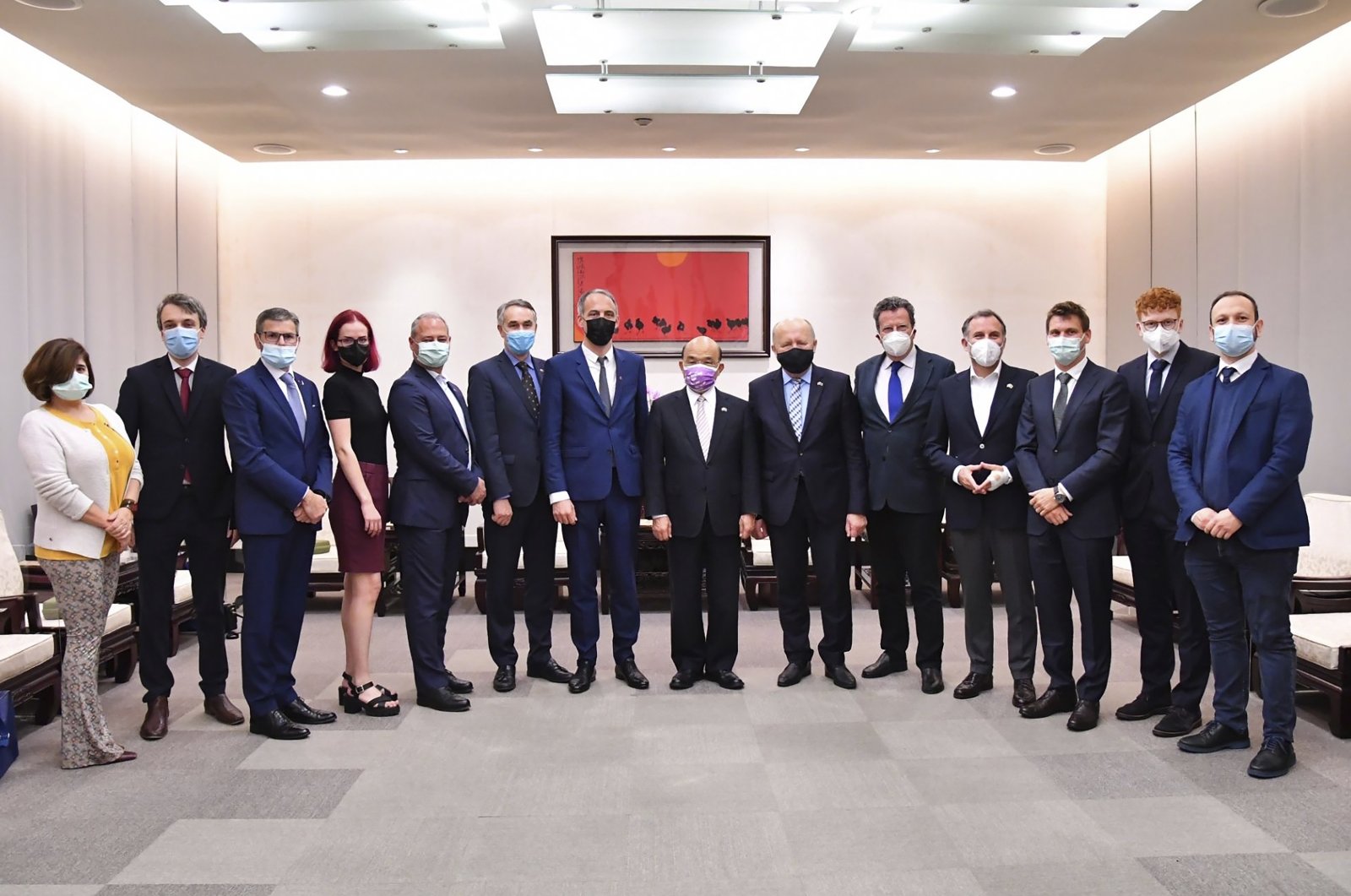 No shaking hands but bumping elbows for a greeting, a delegation of European Union parliamentarians met with Taiwan's premier Wednesday in their first such official visit to the self-ruled island, which is also claimed by China.

Thirteen members of the EU committee on foreign interference in democratic processes are visiting Taiwan, after the European Parliament passed a resolution last month calling for the body to "intensify EU-Taiwan political relations."

"Although we are geographically very far away, between our two sides, we share the same values, such as freedom, democracy, human rights and rule of law. ... In those regards, we are actually very close,” Taiwan's Premier Su Tseng-chang said.

The visit comes amid growing support for the democratic island, which China claims as part of its territory to be annexed by force if necessary, and rising negative perceptions toward Beijing in Western countries.

"The flourishing of your democracy is formidable and this is why we are so happy to be here,” said Raphael Glucksmann, the chair of the foreign interference committee. ”You have shown that in this region democracy can flourish and that authoritarian regimes are not the future."

Lithuania, an EU member, accepted Taiwan's request in July to open a representative office in its capital city that will act as a de facto embassy. It has also donated hundreds of thousands of vaccines to the island this year, provoking China's displeasure. In August, China withdrew its ambassador to Lithuania in protest and expelled Lithuania's ambassador from Beijing.

In October, the EU Parliament voted to pass a resolution on Taiwan issues, noting tensions in the South China Sea.

The non-binding resolution, which passed with 580-26 votes and 66 abstentions, calls on the EU to immediately begin taking steps to establish a bilateral investment agreement with Taiwan. It also proposes the politically symbolic gesture of changing the name of the representative office in Taiwan from the European Economic and Trade Office in Taiwan to the European Union Office in Taiwan.

The report also calls on China to put an immediate end to its "ongoing intrusions into Taiwan’s air defense identification zone,” saying that the "EU greatly values security in the Taiwan Strait.”

China has sent an increasing amount of fighter jets toward the island in a prolonged campaign of military harassment since at least last year, when Taiwan began publicly releasing the data. China has said it sends the planes as a warning to "Taiwan separatists” and to safeguard its sovereignty.

The report also echoed the U.S. stance, as Secretary of State Antony Blinken recently called for other members of the United Nations to back Taiwan's independent participation in international groups.

Taiwan's Foreign Minister Joseph Wu visited the Czech Republic and Slovakia last week on a tour to step up cooperation with the two countries.