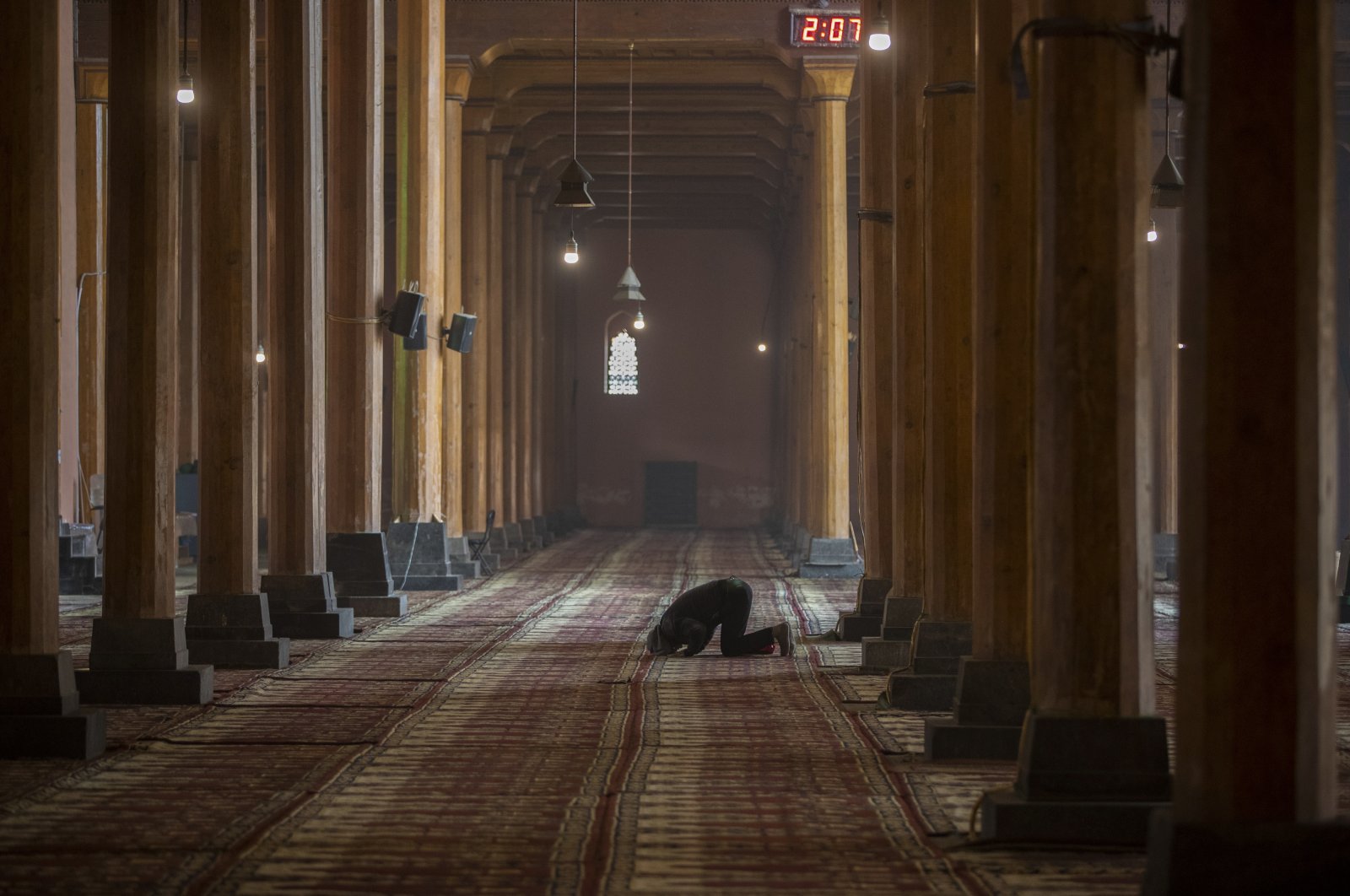 The constant restrictions on prayers and closure of Srinagar's great Jamia Masjid mosque make Muslims feel like chains have been wrapped around their throats, as Indian authorities see the religious institution as a so-called 'nerve center' for protests that challenge New Delhi's sovereignty over the disputed region

Jamia Masjid, the grand mosque of Srinagar, dominates its neighborhood with an imposing main gate and massive turrets. It can hold 33,000 worshippers, and on special occasions over the years, hundreds of thousands of Muslims have filled nearby lanes and roads to offer prayers led from the mosque.

But Indian authorities see the mosque as a trouble spot – what they call as a "nerve center" for protests and clashes that challenge India over the disputed Kashmir region.

For Kashmiri Muslims it is a sacred venue for Friday prayers and a place they can raise their voices for political rights.

In this bitter dispute, the mosque in Kashmir’s main city has largely remained closed for the past two years. The mosque’s chief imam has been detained in his home almost nonstop throughout that time, and the mosque’s main gate is padlocked and blocked with corrugated tin sheets on Fridays. The closure of the mosque, which is revered by Kashmir’s mostly Muslim population, has deepened their anger.

"There is a constant feeling that something is missing in my life,” said Bashir Ahmed, 65, a retired government employee who has offered prayers at the mosque over five decades.

Indian authorities refused to comment on the mosque restrictions despite repeated queries from The Associated Press (AP). In the past, officials have said the government was forced to close the mosque because its management committee was unable to stop anti-India protests on the premises.

The closing of the 600-year-old mosque came amid a clampdown that began in 2019 after the government stripped Kashmir of its long-held semiautonomous status.

In the past two years, some of the region’s other mosques and shrines – also closed for months due to the Indian government's crackdown and the subsequent pandemic – have been allowed to offer religious services.

Jamia Masjid has remained out of bounds to worshippers for prayers on Friday, which is the main day of congregational worship in Islam. Authorities allow the mosque to remain open the other six days, but only a few hundred worshippers assemble there on those occasions, compared to the tens of thousands that often gathered on Fridays.

"This is the central mosque where our ancestors, scholars and spiritual masters have prayed and meditated for centuries,” said Altaf Ahmad Bhat, one of the officials at the grand mosque. He dismissed the law-and-order reasons cited by the authorities as "absurd,” and added that discussions about social, economic and political issues affecting Muslims were a core religious function of any grand mosque.

For the region’s Muslims, the mosque’s closure brings painful memories of the past. In 1819, Sikh rulers closed it for 21 years. Over the past 15 years, it has been subject to periodic bans and lockdowns by successive Indian governments. But the current restrictions are the most severe since the region was divided between India and Pakistan after the two nations gained independence from British colonialism in 1947. Both claim the Himalayan territory in its entirety.

The Indian government initially grappled with largely peaceful public protests seeking a united Kashmir, either under Pakistani rule or as an independent entity. But a crackdown on dissent led to Kashmir’s eruption into an armed rebellion against India in 1989. India has alleged the insurgency is Pakistan-sponsored terrorism, a charge Pakistan has denied.

Indian forces largely crushed the rebellion about 10 years ago, though popular demands for "Azadi,” or freedom, remained ingrained in the Kashmiri psyche.

The region made a transition from the armed struggle to unarmed uprisings, with tens of thousands of civilians repeatedly taking to the streets to protest Indian rule, often leading to deadly clashes between stone-throwing residents and Indian troops. The grand mosque and its surrounding areas in Srinagar’s heart emerged as central to these protests.

Sermons at the Jamia Masjid would often address the long-simmering conflict, with Mirwaiz Umar Farooq, the chief imam and one of the region’s top leaders, giving emotive speeches highlighting Kashmir’s political struggle.

Authorities often clamped down, banning prayers at the mosque for extended periods. According to official data, the mosque was closed for at least 250 days in 2008, 2010 and 2016 combined.

The conflict again intensified after Prime Minister Narendra Modi came to power in 2014 and won a landslide re-election in 2019.

Freedom of religion is enshrined in India’s Constitution, allowing citizens to follow and freely practice religion. The constitution also says the state will not "discriminate, patronize or meddle in the profession of any religion.”

But even before the current security operation in Kashmir, experts say conditions for India’s Muslims under Modi have worsened.

In Kashmir, the clampdown on the most revered mosque has aggravated these fears.

"Jamia Masjid represents the soul of Kashmiri Muslims’ faith and has remained at the center of demands for social and political rights since its foundation some six centuries back,” said Zareef Ahmed Zareef, a poet and an oral historian. "Its closure is an attack on our faith,” he added.

On special occasions like the last Friday in the fasting month of Ramadan, hundreds of thousands of faithful pray in the mosque, filling its neighborhood's winding lanes and roads. For the last two years, such scenes have remained missing. Muslims say the gag is undermining their constitutional right to religious freedom.

Ahmed, a worshipper, on a recent Saturday afternoon sat inside the mosque, a wood and brick architectural marvel with 378 wooden pillars. He said he has never seen the mosque shut and desolate for such an extended period.

"I feel deprived and violated,” Ahmed said as he raised his hands in supplication. "We have been subjected to extreme spiritual suffering,” he said.

Many Kashmiri Muslims have long said New Delhi curbs their religious freedom on the pretext of law and order while promoting and patronizing the annual Hindu pilgrimage to an icy Himalayan cave visited by hundreds of thousands of Hindus from across India.

The Amarnath pilgrimage lasts for nearly two months, although it was canceled for the last two years due to the pandemic.

On a recent Friday, as the mosque remained closed, its sprawling marketplace, an otherwise vibrant and bustling neighborhood, wore a deserted look.

Babul, a mentally challenged man in his 40s who inhabits the place in and around the grand mosque, whirled around the neighborhood. He cautioned shopkeepers of imminent danger from police raiding the place, as they have done in the past. Nearby, a gaggle of Indian tourists went about clicking selfies in the backdrop of the mosque’s barricaded and locked main gate.

Kashmiri onlookers watched them in silence.