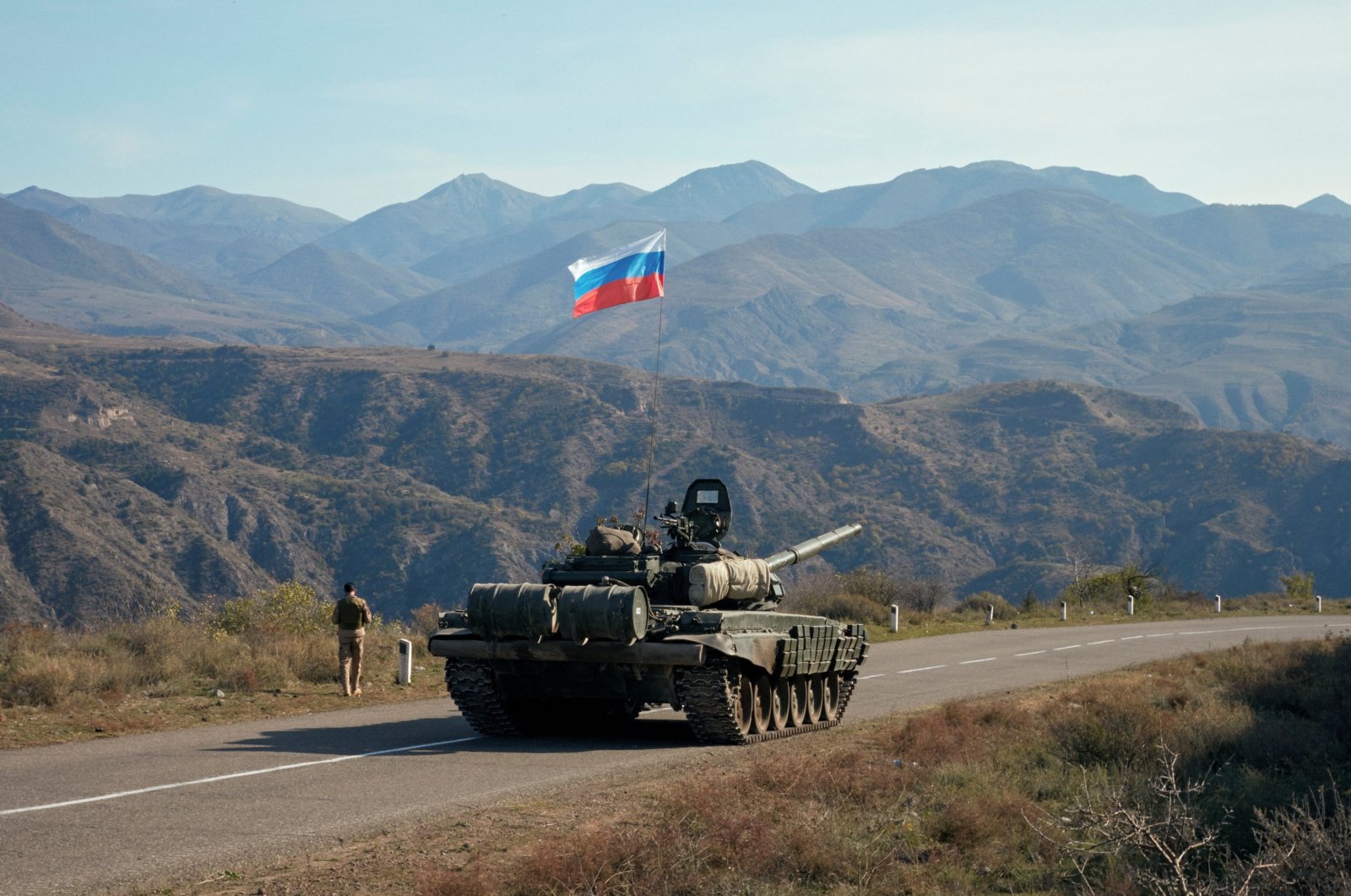 A member of the Russian peacekeeping troops walks by a tank near the border with Armenia, in the region of Nagorno-Karabakh, Azerbaijan, Nov. 10, 2020. (Reuters Photo)
by Daily Sabah with Reuters Jul 29, 2021 11:42 am
RECOMMENDED

Armenia has reiterated its request for Russian military support. Armenian Prime Minister Nikol Pashinian on Thursday proposed that Russian border forces be stationed along the length of its border with Azerbaijan amid rising tensions between Yerevan and Baku, the TASS news agency reported.

Armenia and Azerbaijan accused each other earlier on Thursday of flouting a Russian-backed cease-fire that both sides had accepted the previous day to halt deadly clashes over their joint border, which Yerevan wants to be demarcated.

"Given the current situation, I think it makes sense to consider the question of stationing outposts of Russian border guards along the entire length of the Armenian-Azeri border," Pashinian was quoted as saying at a government meeting.

He said that Yerevan was preparing to discuss that proposal with Moscow and that the move would allow work to be carried out on the demarcation and delimitation of the border without the risk of military clashes.

Armenia's Defense Ministry said earlier that Azeri troops had opened fire on Armenian positions at the Gegharkunik section of the border in the early hours of Thursday morning, prompting Armenia to return fire.

Azerbaijan's Defense Ministry said that Armenian forces had opened fire with machine guns and grenade launchers in the direction of a village in the Kelbajar region, and had thrown hand grenades. It said its forces returned fire in a statement.

The cease-fire was called on Wednesday after one of the deadliest border incidents since last year's six-week war between Armenian forces and Baku over the Nagorno-Karabakh region and surrounding areas.

In fighting from last September to November, Azerbaijani troops drove Armenian forces out of swathes of territory they had controlled since the 1990s in and around the Nagorno-Karabakh region, before Russia brokered a cease-fire.

A simmering border dispute between the two has since flared up, with both sides accusing each other of separate incursions into each others' territory in recent months, highlighting the fragility of the cease-fire.

Armenia has frequently called for military support from Russia. In a fresh attempt of expanding its sphere of influence in the Caucasus region, Russia in May occupied two new sites in the south of Armenia near the Azerbaijani border as an "additional security guarantee" following last year's conflict over the Nagorno-Karabakh region.

It also said it would continue to mediate and provide advisory assistance aimed at reaching an agreement between Azerbaijan and Armenia, as the two countries look to settle border disputes that are nearly three decades old.

However, the one-sided and partial attitude of Russian military elements deployed in the Karabakh region to monitor a cease-fire deal signed in November in favor of the Armenian side has raised eyebrows in Azerbaijan.

Ankara has pledged its full support to Baku in its efforts to liberate its lands from Armenian occupation. Following the Nov. 10 signing of a Russia-brokered agreement to end the fighting and work toward a comprehensive resolution, Turkey agreed with Russia that its troops would also monitor the cease-fire. Ankara and Moscow signed an agreement to establish a joint observation center in Nagorno-Karabakh as soon as possible.

Highlighting that President Recep Tayyip Erdoğan and President Ilham Aliyev proposed a six-country platform for peace in the region in the postwar period, Turkey's ruling Justice and Development Party (AK Party) Deputy Chair Numan Kurtulmuş said Wednesday that Ankara and Baku are sincere and determined to create an environment where all countries of the region –Turkey, Azerbaijan, Armenia, Russia, Iran and Georgia – will solve their problems among themselves and make economic gains together.