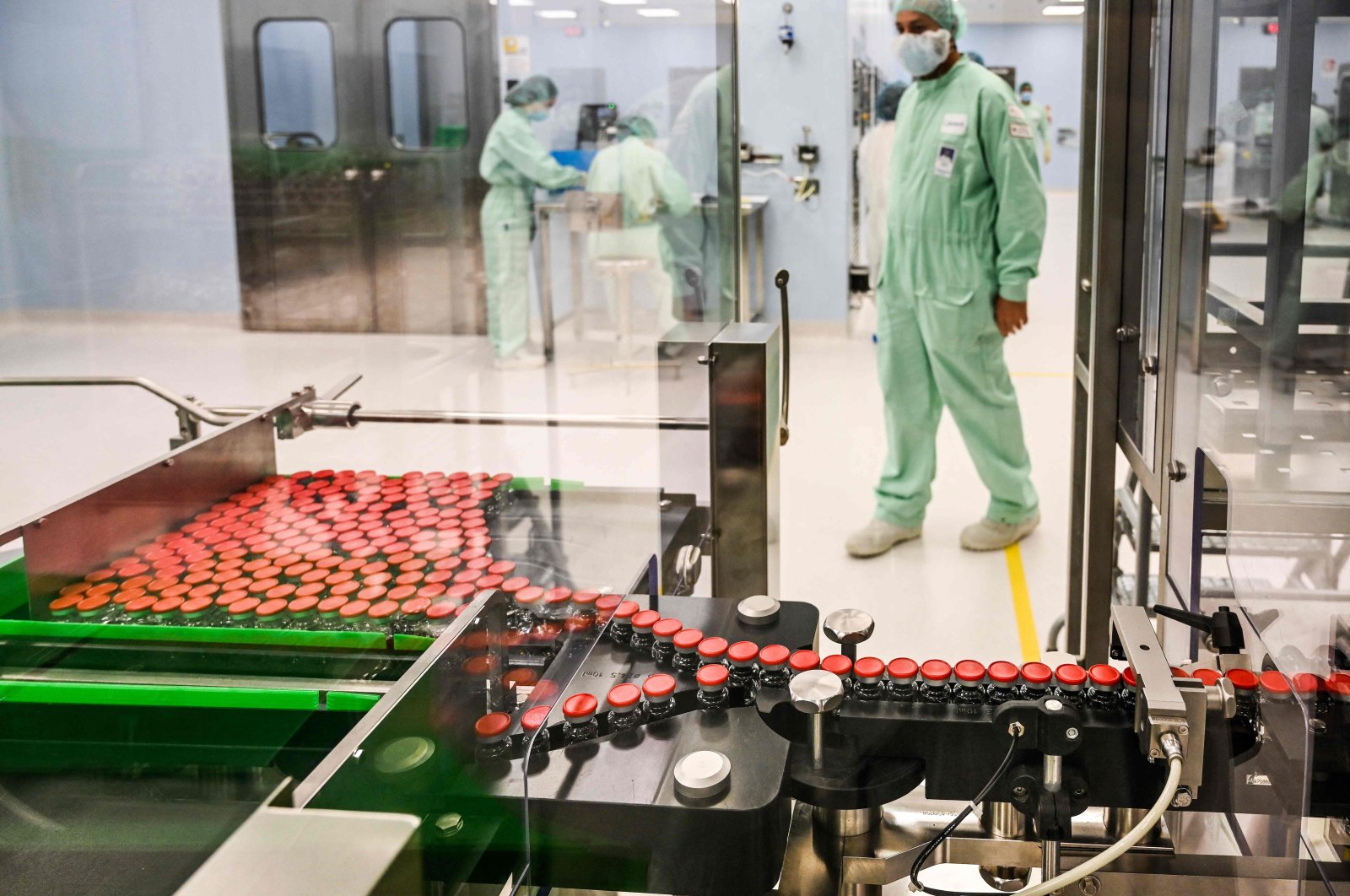 A laboratory technician supervises capped vials during filling and packaging tests for the large-scale production and supply of AstraZeneca’s COVID-19 vaccine, at a biologics’ manufacturing facility in Anagni, Italy, Sept. 11, 2020. (AFP Photo)
by French Press Agency - AFP Mar 25, 2021 12:05 am
RECOMMENDED

The European Union on Wednesday tightened vaccine export controls in a bid to ramp up its stuttering inoculation campaign while the United States said its inoculation drive was showing results for over-65s.

Under the EU's new rules, the bloc's European Commission executive will weigh how needy countries are as well as how readily they export doses to the EU before approving shipments.

Meanwhile across the Atlantic, the vaccination progress in the U.S. is now visible in "significant declines in emergency department visits among people over 65," said Rochelle Walensky, director of the Centers for Disease Control and Prevention (CDC).

Around 70% of Americans aged 65 or over, more than 38 million people, have received at least one dose, and the group's hospital admissions for COVID-19 are down 85% since early January.

In Europe, French President Emmanuel Macron acknowledged that while the US had "looked to the stars" by pumping massive resources into vaccine procurement, the EU had been "a bit of a diesel engine... it starts slowly".

Speaking on the EU's vaccine rollout which has stuttered, "We were wrong to lack ambition," Macron said, while insisting that "we are catching up".

With Britain seen as one of the main targets of the EU's new export rules, London and Brussels issued a joint statement Wednesday saying the neighbours were "working on specific steps... to create a win-win situation and expand vaccine supply".

However, ahead of the declaration, Prime Minister Boris Johnson said the bloc risked "long-term damage" to its reputation if it imposed "a blockade, or interruption of supply chains".

In Berlin, Chancellor Angela Merkel made a rare climbdown by scrapping plans for a strict Easter shutdown after a public outcry.

"This mistake is mine alone," Merkel said. "The whole process has caused additional uncertainty, for which I ask all citizens to forgive me."

Neighbor Belgium said it would bring in a new partial lockdown for four weeks, closing schools and limiting access to non-essential shops as it seeks to quell a third wave.

The Austrian capital Vienna and two neighbouring regions will be locked down tighter over Easter holidays, with only specific exceptions such as buying food and daily exercise.

The EU-British showdown has added to AstraZeneca's woes after several countries suspended its vaccine over blood clot fears.

The World Health Organization and the European Medicines Agency have both said the jab is safe and effective, dismissing feared links with clots.

Finland on Wednesday said it would resume the shot for over 65s, while Iceland would do the same for people over 70, joining several countries that have started using the vaccine again.

In a fresh controversy, the British-Swedish firm this week published promising results from its US trials, but a day later the US National Institute for Allergies and Infectious Diseases (NIAID) raised concerns the results were outdated.

The head of the agency, Anthony Fauci, said the data discrepancy was a "bump in the road" and hoped it would not puncture confidence in vaccines, saying data would show AstraZeneca was "a good vaccine".

AstraZeneca has backed its shot, saying Tuesday that a review found the interim results it had announced were "consistent", and that it would release new analysis and data "within 48 hours".

Around the world, 479 million vaccine doses have been administered, according to an Agence France-Presse (AFP) count from official sources, with the United Arab Emirates, Chile, Britain, Bahrain and the U.S. far ahead of major European nations, while more than 2.7 million COVID-19 patients have lost their lives worldwide.