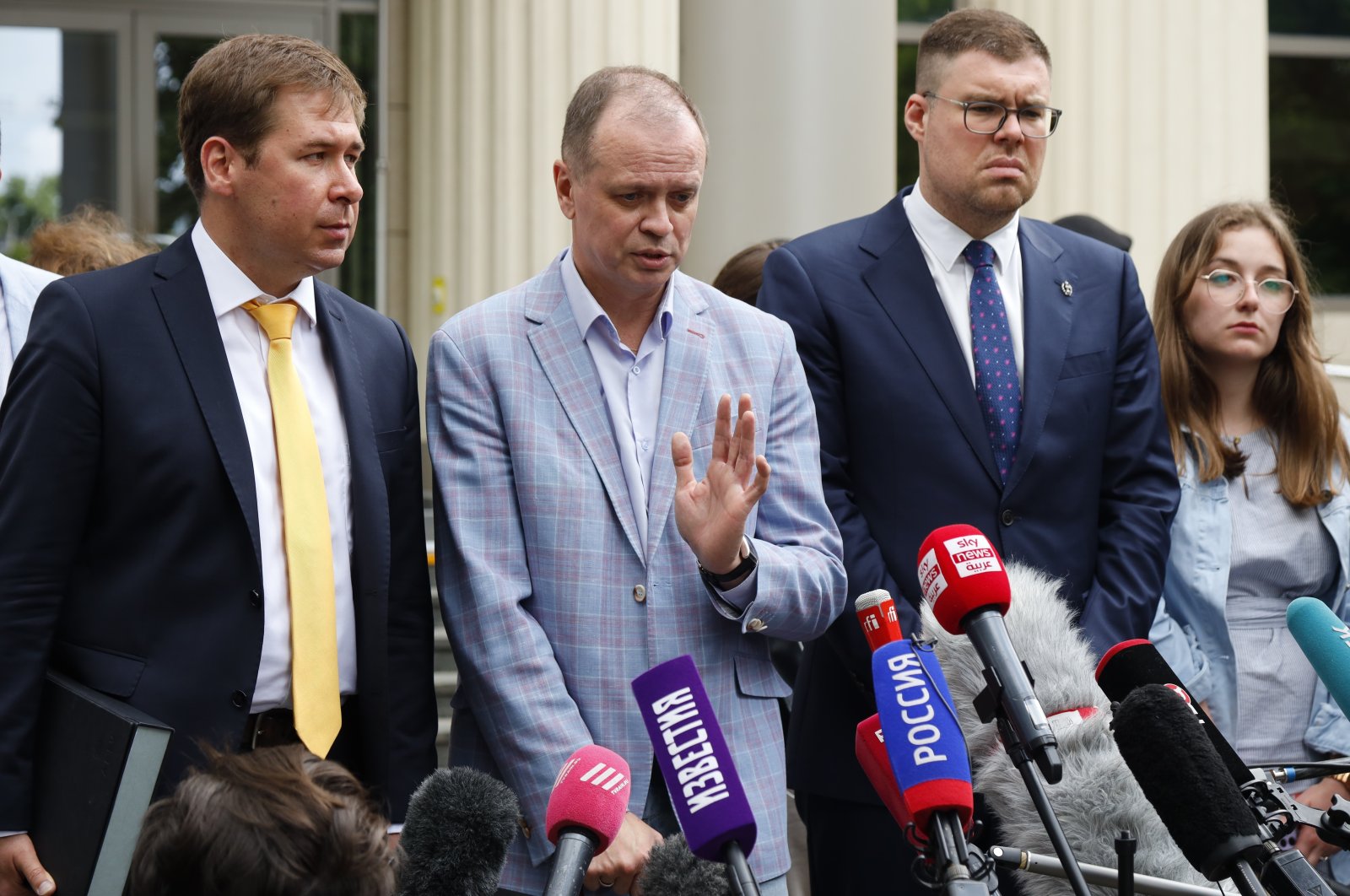 Russian lawyer Ivan Pavlov (C), gestures while speaking to the media as other lawyers stand around him during a break in a court session in front of Moscow Court, in Moscow, Russia, June 9, 2021. (AP Photo)
by ASSOCIATED PRESS Jun 10, 2021 10:52 am
RECOMMENDED

The Russian court on Wednesday night designated the country's main opposition leader Alexei Navalny's organization as extremist and prevented it from carrying out further activities, in a move widely seen as another crackdown on dissidents.

The Moscow City Court’s ruling, effective immediately, prevents people associated with Navalny’s Foundation for Fighting Corruption (FBK) and his sprawling regional network from seeking public office. Many of Navalny’s allies had hoped to run for parliamentary seats in the Sept. 19 election.

The ruling, part of a multipronged Kremlin strategy to steamroll the opposition, sends a tough message one week before President Vladimir Putin holds a summit meeting with U.S. President Joe Biden in Geneva.

The extremism label also carries lengthy prison terms for activists who have worked with the organizations, anyone who donated to them, and even those who simply shared the groups’ materials.

Navalny, Putin's most ardent political foe, was arrested in January upon returning from Germany, where he spent five months recovering from a nerve agent poisoning that he blames on the Kremlin an accusation that Russian officials reject. In February, Navalny was given a 2 1/2-year prison term for violating the terms of a suspended sentence from a 2014 embezzlement conviction that he dismissed as politically motivated.

In a statement posted on his Instagram account after the verdict, Navalny denounced the hearing as a travesty of justice and vowed to continue defying the Kremlin.

"When corruption is the foundation of the government, fighters against corruption are cast as extremists,” the statement said. "We will not abandon our goals and ideas. It's our country and we don't have another one.”

The U.S. State Department condemned the court's ruling, saying that "Russia has effectively criminalized one of the country’s few remaining independent political movements.”

"The Russian people, like all people, have the right to speak freely, form peaceful associations to common ends, exercise religious freedom, and have their voices heard through free and fair elections,” State Department spokesman Ned Price said in a statement.

The court session, lasting more than 12 hours, was held behind closed doors on grounds that classified materials would be discussed. The judge rejected a defense appeal to allow Navalny to take part via a video link from prison and dismissed other motions by the defense.

Lawyer Yevgeny Smirnov said during the hearing that the prosecutors’ motion was intended to bar Navalny’s associates from running for public office. "This case has been linked to the law that bans all those who are connected with the Foundation for Fighting Corruption from getting elected,” Smirnov said.

Lawyers said they would appeal the ruling. Navalny’s offices in dozens of Russian regions already shut down in April after prosecutors issued an injunction to suspend their activities pending the court ruling, but the opposition leader's associates have vowed to continue their work in different formats. His foundation, started 10 years ago, has relentlessly targeted senior government officials with colorful and widely watched videos that detail corruption allegations against them.

One of its latest productions, which has received 117 million views on YouTube, claimed that a lavish palace on the shores of the Black Sea was built for Putin through an elaborate corruption scheme. The Kremlin has denied any links to Putin.

Navalny also has relied on his offices across Russia to organize anti-Kremlin protests and implement his Smart Voting strategy – a project to support the candidates most likely to defeat those from the Kremlin’s dominant United Russia party in various elections.

During the hearing, prosecutors accused Navalny's organizations of staging protests to overthrow the government. As the Moscow court was preparing to consider the case, Russian lawmakers fast-tracked a measure that banned members of organizations declared extremist from running for public office.

The law was signed by Putin last week, and combined with the court ruling will dash the hopes of several Navalny associates who have declared their intention to run for parliament.

Ivan Zhdanov, a top Navalny associate who headed his foundation, vowed that the team will continue publishing exposes of corrupt officials and apply the Smart Voting strategy.

"Navalny's team will not stop its activities, they shouldn't hope for that,” Zhdanov, who lives abroad, told the independent Dozhd TV.

The September vote is widely seen as an important part of Putin’s efforts to cement his rule ahead of the 2024 presidential election. The 68-year-old leader, who has been in power for more than two decades, pushed through constitutional changes last year that would potentially allow him to hold onto power until 2036. Ahead of the vote, the government has targeted other opposition figures as well.

Last week, authorities arrested Andrei Pivovarov, the head of another anti-Kremlin group that they have labeled "undesirable” – a designation used by the Kremlin to outlaw more than 30 groups.

Days before his arrest, Pivovarov announced the dissolution of his Open Russia movement to protect members from prosecution, but that didn't stop authorities from pulling him off a Warsaw-bound plane at St. Petersburg’s airport last week.

A court in southern Russia's Krasnodar region ordered him to be held for two months pending an investigation. Membership in "undesirable” organizations is a criminal offense under a 2015 law, and another bill now making its way through the Russian parliament increases the punishment for it, introducing prison terms of up to six years for their members.

Open Russia was financed by Russian tycoon Mikhail Khodorkovsky, who moved to London after spending 10 years in prison in Russia on charges widely seen as political revenge for challenging Putin’s rule.

Khodorkovsky has described the ongoing crackdown on dissent as a reflection of authorities’ concern about the waning popularity of the main Kremlin-directed party, United Russia. Another opposition activist, Dmitry Gudkov, a former Russian lawmaker who has aspired to run again for the parliament, was held for two days last week on financial charges that he and his supporters allege were trumped up. He went abroad after being released, saying that he had received a warning that he would be jailed if he didn't leave the country.