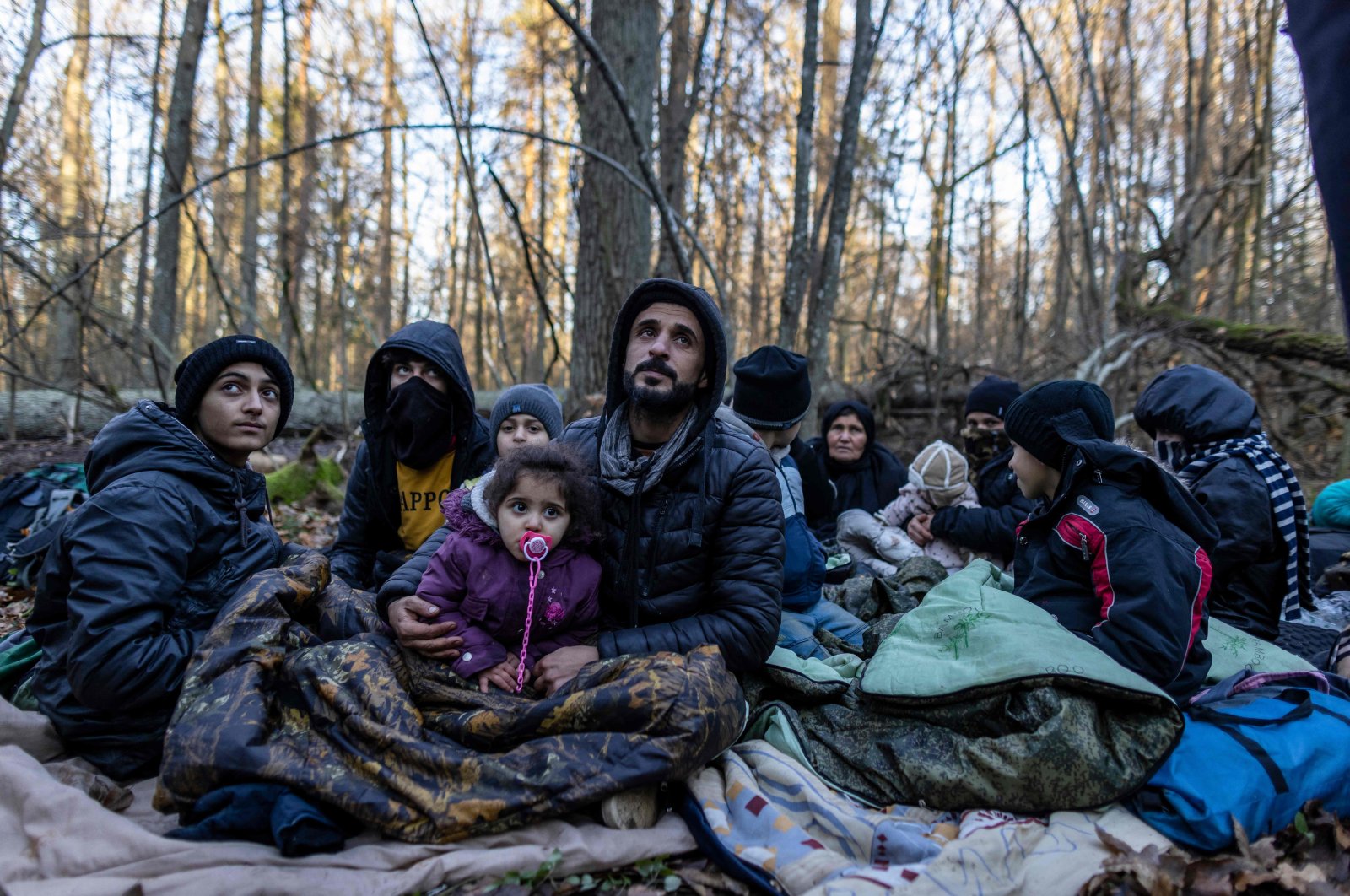 Members of a Kurdish family from Dohuk in Iraq are seen in a forest near the Polish-Belarus border while waiting for the border guard patrol, near Narewka, Poland, on Nov. 9, 2021. (AFP Photo)
by Agencies Dec 03, 2021 8:11 am
RECOMMENDED

The United States, European Union, Britain and Canada slapped simultaneous sanctions Thursday on dozens of officials, organizations and companies in Belarus, with the EU taking aim at those accused of participating in a "hybrid attack" on the bloc using migrants.

The three countries and the 27-nation EU have targeted Belarus since President Alexander Lukashenko won a sixth term last year in an election that the West and other observers say was fraudulent, and over the security crackdown on peaceful protestors that followed.

The U.S. State Department said the U.S. Treasury has "identified three aircraft as blocked property and designated 32 individuals and entities, including Belarusian state-owned enterprises, government official, and other persons, who support the regime and facilitate its repression."

The measures also hit air carriers – including state carrier Belavia – and travel groups accused by the EU of helping to bring migrants to Belarus with the aim of helping them cross into the 27-country bloc, chiefly through Poland, Lithuania and Latvia.

Britain said it had imposed sanctions "on eight Belarusian individuals responsible for repression and human rights violations." It also froze the assets of OJSC Belaruskali, one of the world's largest producers of potash fertilizer, which is a major source of revenue for the Belarus government, as The Associated Press (AP) reported.

The State Department said that "today's actions demonstrate our unwavering determination to act in the face of a brutal regime that increasingly represses Belarusians, undermines the peace and security of Europe, and continues to abuse people seeking only to live in freedom."

At least 8,000 migrants, many of them Iraqis, have entered the EU without authorization this year from Belarus. Lithuania and Poland declared a state of emergency at their borders to stop people crossing. Several people died, trapped in the Poland-Belarus border zone in sub-zero temperatures.

With that in mind, the EU targeted Belavia. "Migrants wishing to cross the Union's external border have been flying to Minsk on board flights operated by Belavia from a number of Middle Eastern countries, in particular Lebanon, UAE (United Arab Emirates) and Turkey," the sanctions text said.

Cham Wing Airlines, which operates flights from Syria to Belarus, is also in the EU's sights. It stands accused of ramping up flights from Damascus to Minsk over the summer and setting up new offices in the Belarusian capital to better organize the shuttles. Also on the list is state tourism company Tsentrkurort, which the EU claims helped at least 51 Iraqis obtain visas to Belarus and organized bus transport for them to the borders.

The Hotel Minsk company and Hotel Planeta, which are linked to the Belarus President Property Management Directorate, are accused of lodging migrants aiming to reach the border.

The EU also took aim at VIP Grub, a passport and visa service based in Istanbul. The sanctions list says the company "organizes trips to Belarus with the explicit intention of facilitating migration to the EU. VIP Grub actively advertises migration to the EU."

Belarus' Foreign Ministry charged Thursday that the new sanctions aim to "economically stifle Belarus, make the life of Belarusians as hard as possible" and to destroy Belarus "as a sovereign, economically successful state."

The ministry rejected allegations that the Belarusian government orchestrated the migrant crisis and blamed the EU for undermining "stability and security in our region." In a statement, it called the EU "the initiator of the sanctions spiral and aggression" and promised "harsh, asymmetrical" measures in response.

"The depth of the absurdity of the EU's decision on the latest sanctions against sovereign Belarus and its very content is by now difficult to comprehend," the ministry said. "The burden of responsibility is placed on Belarus while blatantly ignoring the true causes of the global migration crisis," it added, according to Agence France-Presse (AFP).

EU foreign policy chief Josep Borrell said the bloc would not tolerate "the orchestrated and politically motivated instrumentalisation of human beings by the Lukashenko regime."

"This cynical strategy of exploiting vulnerable people is an abhorrent attempt to deflect attention from the regime's continued disregard for international law, fundamental freedoms and human rights in Belarus," Borrell said in a statement.

"The regime artificially created a crisis on the Belarusian-Polish border, cynically using migrants, living people, as a ram," Tsikhanouskaya said. "But instead of getting back his legitimacy and attention, Lukashenko achieved the opposite – the EU didn't give in to the pressure and imposed new sanctions."

In a joint statement, the U.S., Britain, Canada and the EU also demanded Lukashenko's regime "immediately and completely halt its orchestrating of irregular migration across its borders with the EU."

"We call for the regime to unconditionally and without delay release its almost 900 political prisoners (and) end its campaign of repression," it added. Separately, Britain named several prominent journalists it called "propagandists" for the Lukashenko government.

"These sanctions continue to target important sources of revenue to the Lukashenko regime and place severe restrictions on those responsible for some of the worst anti-democratic acts in Belarus," said British Foreign Secretary Liz Truss.

Washington said its sanctions target "migrant smuggling and victimization of migrants." Among others, Washington blacklisted Dmitry Lukashenko, the second son of leader Lukashenko.

"Today's actions demonstrate our unwavering determination to act in the face of a brutal regime that increasingly represses Belarusian, undermines the peace and security of Europe, and continues to abuse people seeking only to live in freedom," U.S. Secretary of State Antony Blinken said in a statement.

Washington also restricted Americans from dealing in new Belarusian sovereign debt with a maturity greater than 90 days issued on or after Thursday by the country's finance ministry or Development Bank. Canadian Foreign Minister Melanie Joly said Ottawa had imposed new sanctions on 24 individuals and seven entities.