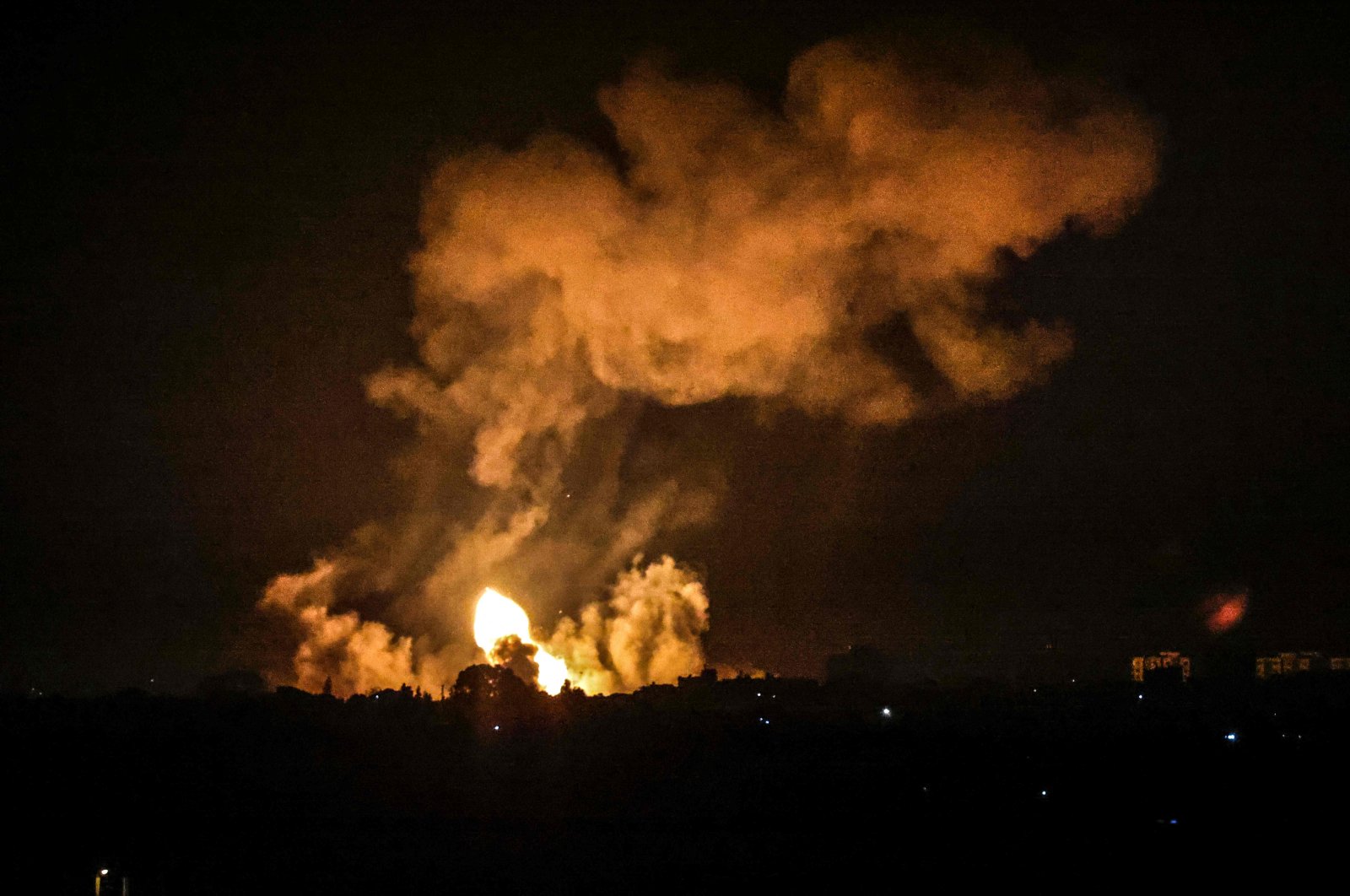 Video filmed in Khan Younis in the southern Gaza Strip showed three huge explosions as fighter jets could be heard flying overhead. There was no immediate confirmation of possible casualties.

The Israel Defense Forces (IDF) said the attacks targeted a rocket manufacturing facility and Hamas military post. It also blamed the resistance group that runs the Gaza Strip for any violence emanating from the territory it controls.

The IDF announced in a brief message to the press that they were "currently carrying out strikes" in Gaza, the Hamas-controlled Palestinian territory.

The sources also reported artillery fire on a Hamas observation base in northern Gaza.

It comes after two rockets were fired from the Gaza Strip on Saturday morning, falling into the Mediterranean Sea, off the coast of Tel Aviv.

No sirens were sounded and Israel's Iron Dome rocket interception system did not deploy, the army said in a statement.

Israel has maintained an illegal blockade on the impoverished enclave since 2007, the year Hamas took power.

In early May, tensions in Israel and Palestine flared into the worst disturbances since 2017 when Israeli riot police clashed with large crowds of Palestinians on the last Friday of the Muslim holy fasting month of Ramadan.

Nightly unrest since then at the Al-Aqsa compound in occupied East Jerusalem left more than 700 Palestinians wounded, drawing international calls for de-escalation and sharp rebukes from across the Muslim world.

Tensions in the area reached an all-time high in May.

The situation in occupied Palestine was so dire that a senior official from the United Nations warned that the two countries were "heading towards a full-scale war."

“Leaders on all sides have to take the responsibility of de-escalation,” he added.

“The cost of war in Gaza is devastating, and is being paid by ordinary people,” he added, pointing to Israel’s killing of Gazan civilians with airstrikes.

“U.N. is working with all sides to restore calm. Stop the violence now,” Wennesland concluded.

For his part, the U.N. Secretary-General Antonio Guterres also said he was "deeply shocked" by the continued air and artillery bombardment by the IDF in the Gaza Strip and called for an immediate cease-fire between Israel and Hamas.

"If there is hell on earth, it is the lives of children in Gaza," Guterres said, noting that he and the U.N. Mideast envoy are engaged in “extensive diplomatic efforts” in the region, including with Egypt, Jordan and Qatar, to stop the conflict.

Guterres called on all members of the international community “to do everything in their power to enable the parties to step back from the brink.”

The top Palestinian diplomat also accused Israel of committing a “genocide” against Palestinian families and urged the international community to protect the Palestinian people until their freedom is assured.

Foreign Minister Riad Malki said that “every country in the world has a responsibility to ensure that peace, justice and freedom prevail.”

He urged the assembly to ensure that Israel is held accountable for killing innocent Palestinians and is not provided with arms.

A fragile cease-fire came into force in late May, and since then only five rockets or mortar rounds were fired from Gaza towards Israeli territory, the military said in an annual report released at the end of December, before the latest launches.

Hamas says Israel did not take serious steps to ease the illegal blockade it imposed on Gaza with Egypt’s help when the resistance movement seized control of the coastal enclave in 2007.

The two-state solution is considered the best option for both parties and the European Union, Turkey, the United States and many other actors back the idea.

"We must work with all our might to preserve the status and sanctity of Jerusalem, the capital of Palestine. The main thing is the establishment of lasting peace and stability on the basis of a two-state solution and established international parameters," President Recep Tayyip Erdoğan said in a recent statement.

Echoing the European Union's traditional stance on the Israel-Palestine conflict, foreign policy chief Josep Borrell also urged a two-state solution in Israel and Palestine when the tensions jumped to an all-time high in May. Borrell insisted that "the status quo is no longer an option in the region."

"The international community, and the EU especially, cannot continue paying for the reconstruction every time a conflict breaks out," he said at a news conference after an informal meeting between EU foreign ministers and their Jordanian counterpart.

The EU recently announced that it would add 8 million euros ($9.76 million) to its humanitarian aid budget for Palestine to help rebuild the Gaza Strip.

"Is 8 million enough for Palestine? For sure it's not enough. The reconstruction of Gaza will cost hundreds of millions of dollars. Of course, we have to help them, but the status quo is unaffordable," he said.

Meanwhile, United States President Joe Biden, in stark contrast to his predecessor Donald Trump's staunchly pro-Israel stance, also backed the two-state solution during a speech at the 76th General Assembly of the United Nations, adding that a sovereign and democratic Palestinian state is the "best way" to ensure the Jewish state's future.

"We must seek a future of greater peace and security for all people of the Middle East," Biden said in a speech to the U.N. General Assembly.

"The commitment of the United States to Israel's security is without question and our support for an independent Jewish state is unequivocal," he said.

"But I continue to believe that a two-state solution is the best way to ensure Israel's future as a Jewish democratic state, living in peace alongside a viable, sovereign and democratic Palestinian state," he said.

"We're a long way from that goal at this moment but we should never allow ourselves to give up on the possibility of progress."

Biden also sought to rally the international community to meet the challenges of our time, telling world leaders "we cannot afford to waste any more time."