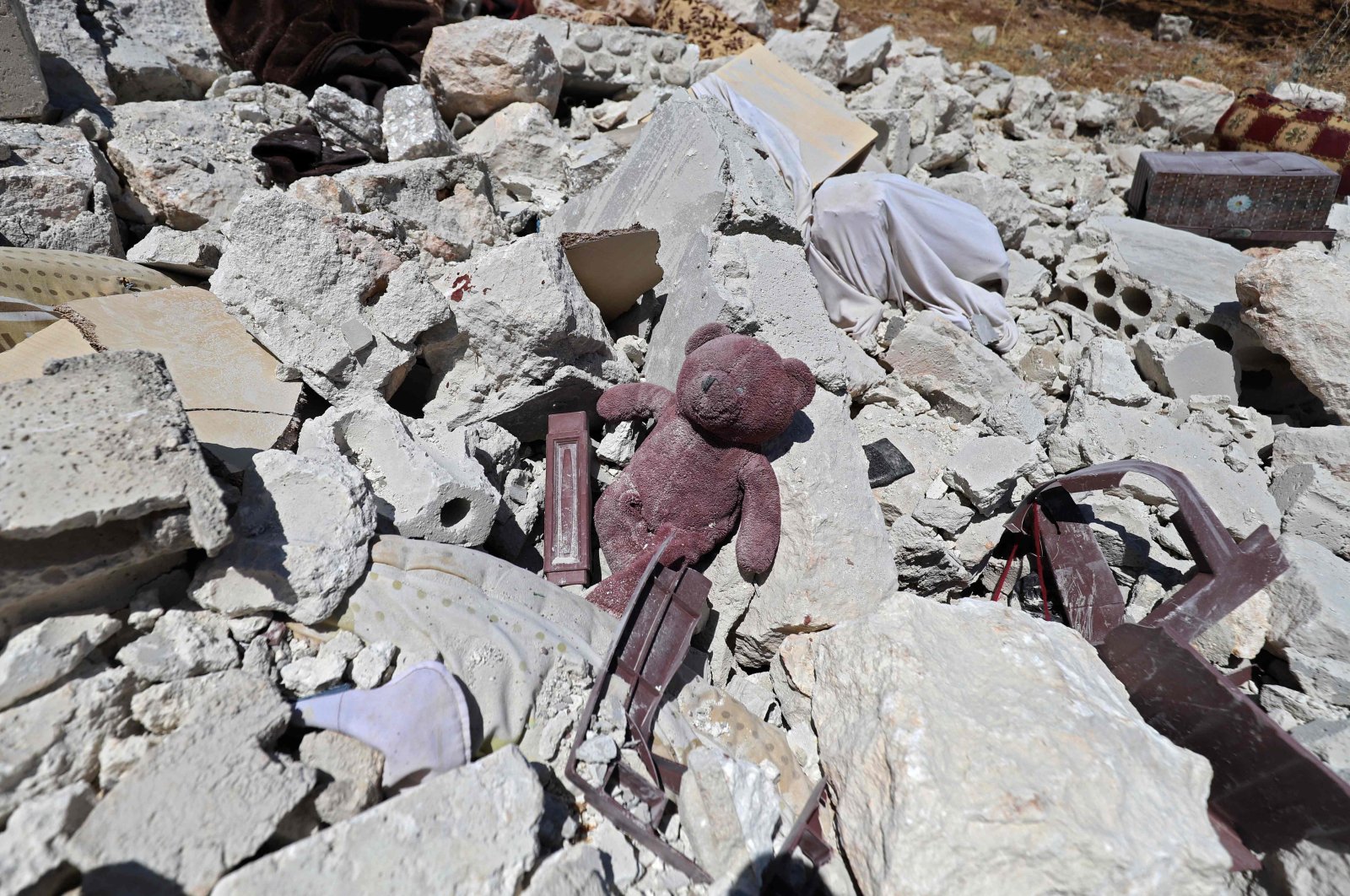 A child's teddy bear is pictured amidst the rubble of a house, following reported shelling by regime forces, in the village of Serja, in the southern part of Syria's Idlib province, on July 17, 2021. (Photo by Abdulaziz KETAZ / AFP)
by Daily Sabah with AFP Aug 08, 2021 11:27 am
RECOMMENDED

The artillery fire late Saturday hit a residential area in the south of the opposition-dominated bastion of Idlib, the Syrian Observatory for Human Rights (SOHR) said.

The victims in the village of Qastoun in the Hama province were from the same family, it said.

The Idlib region is home to nearly 3 million people, two-thirds of them displaced from other parts of the country during the decade-long civil war.

Nearly 75% of the total population in northwestern Syria's Idlib region depends on humanitarian aid to meet their basic needs as 1.6 million people continue to live in camps or informal settlements, the United Nations Office for the Coordination of Humanitarian Affairs (OCHA) said.

An OCHA official recently told Daily Sabah that an estimated 3.4 million people, out of northwestern Syria's 4.2 million population, are in need of aid. Almost 2.7 million are internally displaced, of which 1.6 million live in camps or informal settlements.

"Many of these (camps are) overcrowded and needs are particularly high. Of the total population (4.2 million) approximately 75% depend on humanitarian aid to meet their basic needs," said the U.N. body.

The lives of the Syrian people, dealing with numerous difficulties in rural Idlib's tent camps, have become much harder due to the ongoing pandemic and high temperatures. As the humanitarian catastrophe in the region reaches new heights, people try to survive by taking shelter under trees or shaky tents built on mud and puddles. Many Turkish NGOs and state agencies continue to provide vital humanitarian aid and conduct humanitarian efforts in the region. Millions of displaced people in the region also need urgent humanitarian medical assistance.

A cease-fire deal brokered by regime ally Russia and main opposition backer Turkey has largely protected the region from a new regime offensive since March 2020.

But regime forces have stepped up their shelling on the south of the bastion since June.

The regime and its backers have violated the ongoing cease-fire in northwestern Syria's Idlib region at least 800 times in the last 45 days, killing at least 66 civilians.