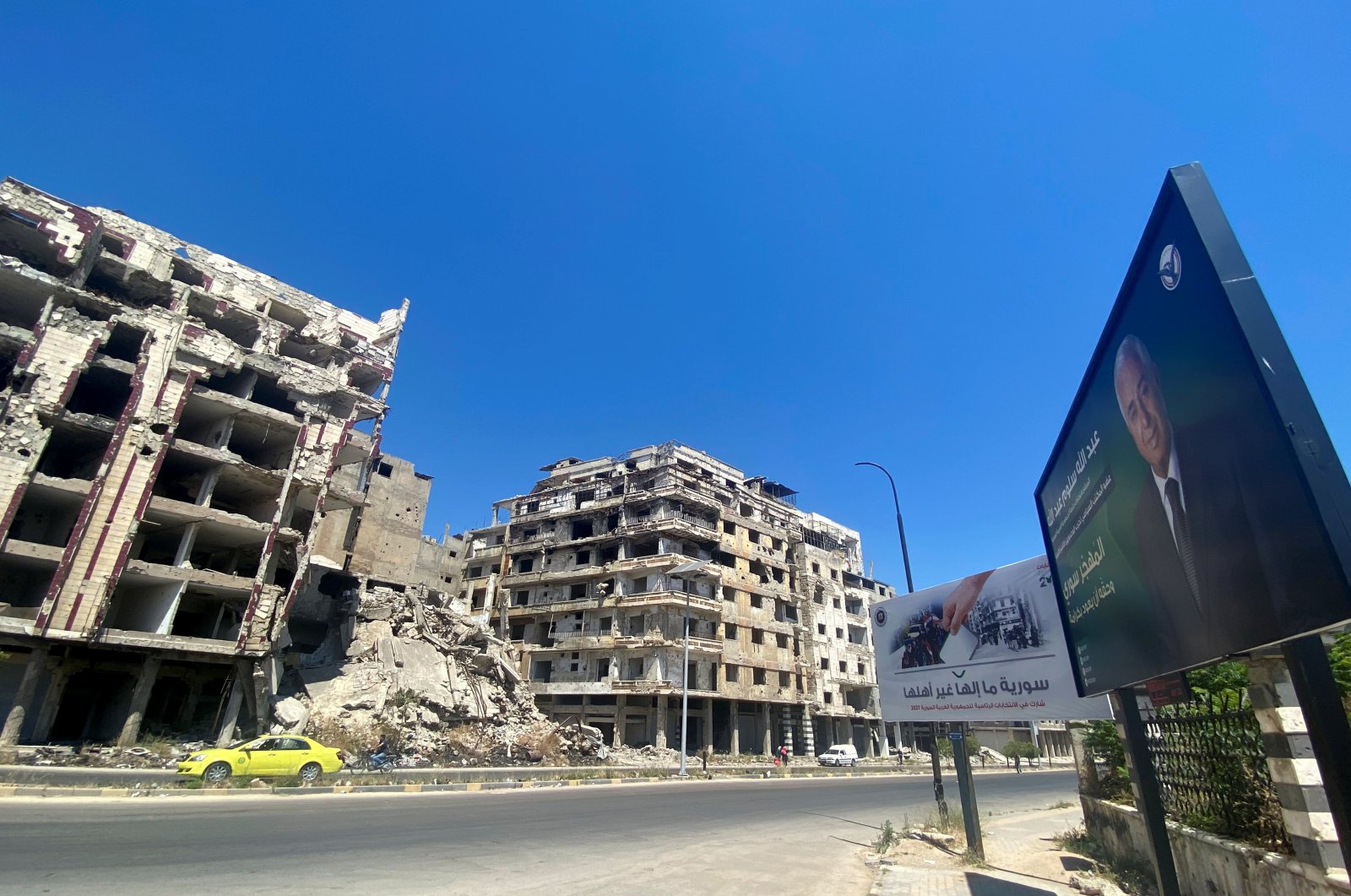 A view shows an election campaign billboard of presidential candidate Abdullah Salloum, near damaged buildings in Homs, Syria, May 23, 2021. (REUTERS)
by DAILY SABAH WITH AGENCIES May 25, 2021 11:18 am
RECOMMENDED

A group of leading tribal and social figures in Syria's Bashar Assad regime-controlled Daraa governorate on Monday released a statement declaring their opposition to the upcoming presidential elections, while a top Syrian opposition figure on Tuesday slammed the polls as a blatant attempt by the regime to undermine the ongoing political process.

In the statement, the Assad regime-mandated elections were described as "illegitimate."

Last month, activists and public figures in various areas of the Daraa governorate also released statements rejecting the presidential elections and the opening of polling stations inside the governorate.

Although the southwestern governorate seems to be under regime control, the situation is not stable. It was recently reported that the Assad regime tortured at least 98 people to death in the last two years, violating a 2018 agreement on Daraa, local sources said.

The regime tortured many people in Daraa who had applied for amnesty based on the deal. Those tortured include about 40 former members of Assad's army, who left when the civil war began.

Back in 2011, upon the Arab Spring spreading to Syria, a group of students in Daraa began the Syrian opposition movement by writing "Ejak el door ya Doctor," meaning "Your turn, doctor," on a school wall. After this initial move, Daraa was taken under opposition forces' control.

However, in 2018, when Daraa was under heavy attack and blockaded by regime forces, Russia became a mediator between the opposition and the regime. As a result of the Russian mediation, those who wanted to stay in the region agreed to lay down their arms, while the groups that refused to reconcile were forced to migrate to the northern parts of the country.

The same year, Assad forces, backed by allied Russian forces, started a massive ground and air offensive to retake Daraa from the opposition. The onslaught forced more than 320,000 people to flee and camp in open spaces or makeshift shelters near the border with Jordan or the Golan Heights.

Currently, opposition groups who chose to stay continue their fight with light arms in regions that regime forces have infiltrated. Although Assad regime forces claim that Daraa is completely under their control, in reality, there are constant attacks by unknown forces. During these attacks, many regime figures, including high-ranking military officials, have been killed.

In another message ahead of the upcoming polls, a top Syrian opposition figure on Tuesday slammed presidential elections in the country as a blatant attempt by the Syrian regime to undermine the ongoing political process.

"These elections contradict what [the U.N. Security Council resolution setting out a political settlement in Syria] calls for, which is the holding of free and fair elections in accordance with a new constitution administered under United Nations supervision," Hadi al-Bahra, co-chair of the opposition Syrian Constitutional Committee, told Deutsche Presse-Agentur (dpa).

He stressed that "the illegal elections" will prolong the suffering of the Syrian people.

"Currently there is no safe and neutral environment that enables all Syrians ... to exercise their right in casting their vote," the opposition figure said.

Tribes in northern Syria's Azaz have also rejected the upcoming presidential elections which are to be held in Assad regime-controlled Syria. Gathering in Azaz Monday, Syria Clans and Tribes Council (SKAM), with the participation of some members from the Syrian Interim Government and Syrian National Army (SNA), stated that the Assad regime has no right nor legitimacy to hold an election. Calling the upcoming elections "illegitimate," the council said that it violates the right of the Syrian people to freely elect their government.

In addition to the opposition groups in Syria, those who had to flee the country also dismiss the legitimacy of the elections. Syrians in Turkey also protested the elections last week in Istanbul, gathering in front of the Syrian Consulate General in the city's Harbiye district.

As the Guardian reported, Saeed Eido, an official from the Syrian Institute for Justice, originally from Aleppo but now living in the Turkish southeastern province of Gaziantep, said that his brother disappeared in a regime prison in 2013.

"We still have no idea if he is alive or dead. They won’t give us any information,” said Eido.

"All this presidential election does is whitewash crimes and maintain a dictatorship," he added.

On April 18, Syria's Parliament set May 26 as the date for a presidential election which is expected to keep Assad in power in the country devastated by a decade of civil war. The 55-year-old is widely expected to secure a fourth term in office by a comfortable margin in the May 26 election, which observers have already said will be far from free and fair.

Assad has won in every election since he assumed power in 2000 as heir to his father, Hafez Assad, by rates exceeding 88%, according to official election results. The previous presidential election was held in 2014 and saw two candidates run against Assad after a constitutional amendment allowing for a multi-candidate ballot.

Since then, regime forces have clawed back swathes of territory from the opposition and terrorist elements with military help from regime allies Russia and Iran. But large parts of Syria still escape regime control and polling will not take place in those areas. They include the northwestern province of Idlib, the last opposition bastion.

Only Syrians living in regime-controlled areas or those who are living abroad and registered with their country's embassies will be allowed to vote. Candidates must also have the backing of at least 35 members of parliament, which is dominated by Assad's Baath Party.

Syria's Supreme Constitutional Court has approved three candidates to run in the presidential race, including Assad. The two others are Abdullah Salloum, an ex-government minister, and Mohamoud Marei, an opposition figure tolerated by the regime and living in Damascus.

Marei, of the opposition Syrian Democratic Front, is casting himself as the first opposition representative to vie for the country’s top post.

He recently acknowledged the modest means of his campaign, saying he has not received any funding from countries or agencies.

In remarks to the dpa, he said that his campaign is “very modest” because he has not received any funding from any state or authority.

All the support he received came from internal national opposition parties and some friends, he added.

Marei revealed that his campaign is focusing on Damascus and its countryside, in addition to several provinces.