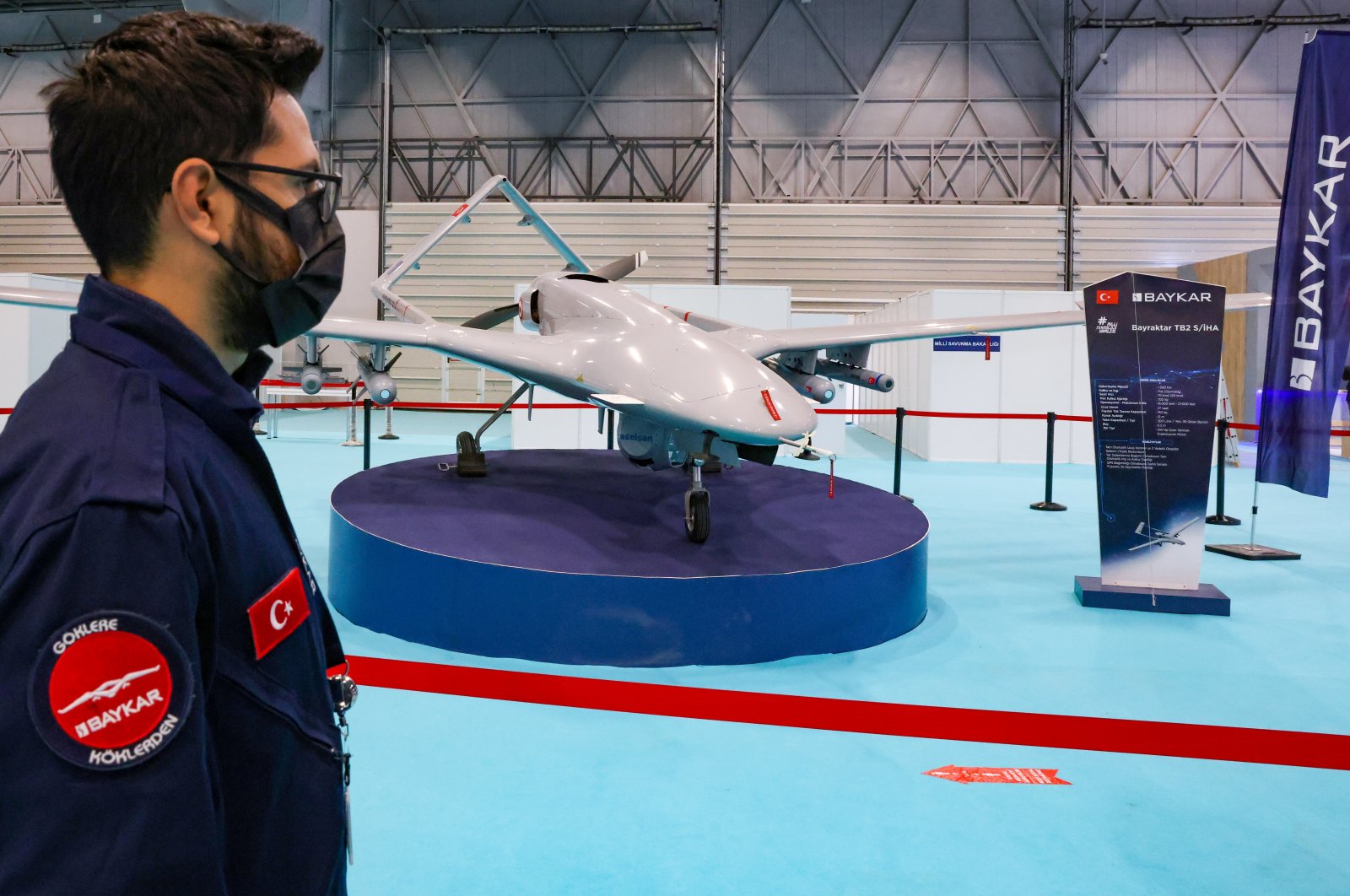 An engineer from Turkish drone-maker Baykar stands next to a TB2 drone during the first day of SAHA EXPO Defence & Aerospace Exhibition in Istanbul, Turkey, Nov. 10, 2021. (Reuters Photo)
by Daily Sabah with Reuters Nov 11, 2021 12:47 pm
RECOMMENDED

Haluk Bayraktar, one of two engineer brothers running Baykar, known for its armed drones that were decisive in conflicts in Azerbaijan and Libya, said the new aircraft would be tested in the next two years and would be able to take off from a Turkish navy ship currently under production.

Turkey’s deployment of the company’s Bayraktar TB2 drone has been a major factor in conflicts in Syria, Iraq, Libya and Azerbaijan, pushing Baykar into the spotlight and transforming it into a major manufacturer and exporter.

The firm has now signed export deals with 13 countries including a joint production deal with Ukraine, as its products help reshape the way modern wars are fought, Bayraktar said.

The scale of Turkey’s drone program puts it in the world’s top four producers alongside the United States, Israel and China, analysts say.

“Smart, unmanned aircraft systems are the two leading technologies that changed the landscape for power projection,” he told Reuters on the sidelines of SAHA EXPO, a major defense show, in Istanbul.

“As everyone is talking about how drone technology is changing battle doctrines ... one of our next objectives is the TB3 drone, capable of taking off from and landing on TCG Anadolu,” Bayraktar said, referring to a planned Turkish light aircraft carrier that will be the largest naval vessel in the Turkish Armed Forces (TSK) inventory.

The multi-purpose flagship-to-be amphibious assault ship is expected to enter service in 2022. Set to become the country's first native and national aircraft carrier, TCG Anadolu will improve the operational capability of the naval forces.

Although the ship will be able to carry combat helicopters on its landing deck, Turkey does not operate a plane that can take off from the vessel. The TB3, with a folding-wing design, could deploy from the short naval runways.

With some sections under production, it is expected to see the first test flight next year, Bayraktar said.

It will be followed by an unmanned combat aircraft, called MUIS, with first prototype flight expected in 2023, he said. Currently in the design phase, MUIS will be jet-powered, with a payload of up to 1.5 tons.

The autonomously maneuvering craft will be capable of operating in tandem with piloted aircraft, and may carry air-to-air missiles, the company said.

Baykar, founded in the 1980s by Bayraktar’s father, Özdemir Bayraktar, who passed away last month at the age of 72, began to focus on unmanned aircraft production in 2005 as Turkey sought to strengthen its local defense industry.

“Everywhere, even in my Africa trip, they want drones, armed drones and Akıncı,” Erdoğan told Baykar workers last month after returning from a trip to Angola, Togo and Nigeria. “The whole world ... wants to see and to know what you are doing.”

The first Akıncı drone, which has a longer flight time and can carry a larger payload than the TB2, was delivered to the Turkish security forces in August.

Bayraktar said Turkey had made a “huge leap” in its effort to create its own defense industry over the last 20 years, expanding from 17 companies to nearly 17,000.

“The drone technology is just one success story born from the national and indigenous development drive,” he said. “We started to reap the benefits of work that began two decades ago only recently.”

The defense company Baykar has delivered drones to 13 countries, and Turkish officials say more potential customers from Africa to Europe have watched their battlefield impact in Syria, Libya and in last year’s six-week conflict between Armenia and Azerbaijan.

They were also deployed by the Ukrainian army for the first time recently to strike a position controlled by Russian-backed separatists in the eastern Donbas region.

Their use has been criticized by the Kremlin, which said the drones risked destabilizing the situation in eastern Ukraine. President Volodymyr Zelenskyy said Kyiv’s use of drones was defensive and does not violate any agreements. Turkey’s Foreign Minister Mevlüt Çavuşoğlu said his country cannot be blamed for Ukraine's deployment of the combat UAVs.

Planned sales to Ethiopia, battling a civil war and at odds with regional power Egypt, is said to risk stoking friction in already strained relations between Ankara and Cairo, which is at odds with Addis Ababa over a hydropower dam on the Blue Nile.

Below is a list of some countries with TB2 drones in their inventories:

In Nagorno-Karabakh, the drones helped Turkey’s ally Azerbaijan defeat Armenia-backed occupying forces. Turkey’s sales of drones and other military equipment rose to $77 million in September 2020 before fighting broke out in the Nagorno-Karabakh region.

Sources familiar with the issue have told Reuters that Ethiopia had requested purchases of the Bayraktar TB2 drones in agreements that could also include spare-part guarantees and training.

Kyrgyzstan is becoming the latest buyer of renowned combat drones. Its armed forces ordered an unknown number of units. Delivery is pending according to Kamchybek Tashiev, chairperson of the State Committee for National Security.

The Tripoli-based government used TB2 drones in 2020 as part of their campaign to push back an assault on the city by eastern forces led by putschist Gen. Khalifa Haftar and supported by Russia, the United Arab Emirates (UAE) and Egypt.

According to local media reports in September, Morocco started receiving TB2 drones out of an order of 13 units and four ground control stations.

Poland announced on May 22 it would buy 24 armed TB2 drones with delivery due in 2022. Its purchase marks the first time a NATO or European Union member state acquired drones from Turkey. Monday.

The Qatar Air Force operates six drones as of 2021.

The central Asian Nation showcased its TB2 platform during the 30th year independence parade in September.

Kyiv is central in the development of the TB2 platform. In 2019 it signed an agreement for 12 drones with additional deliveries the following year. Ukraine is also developing a joint venture with Turkey to produce 48 drones.