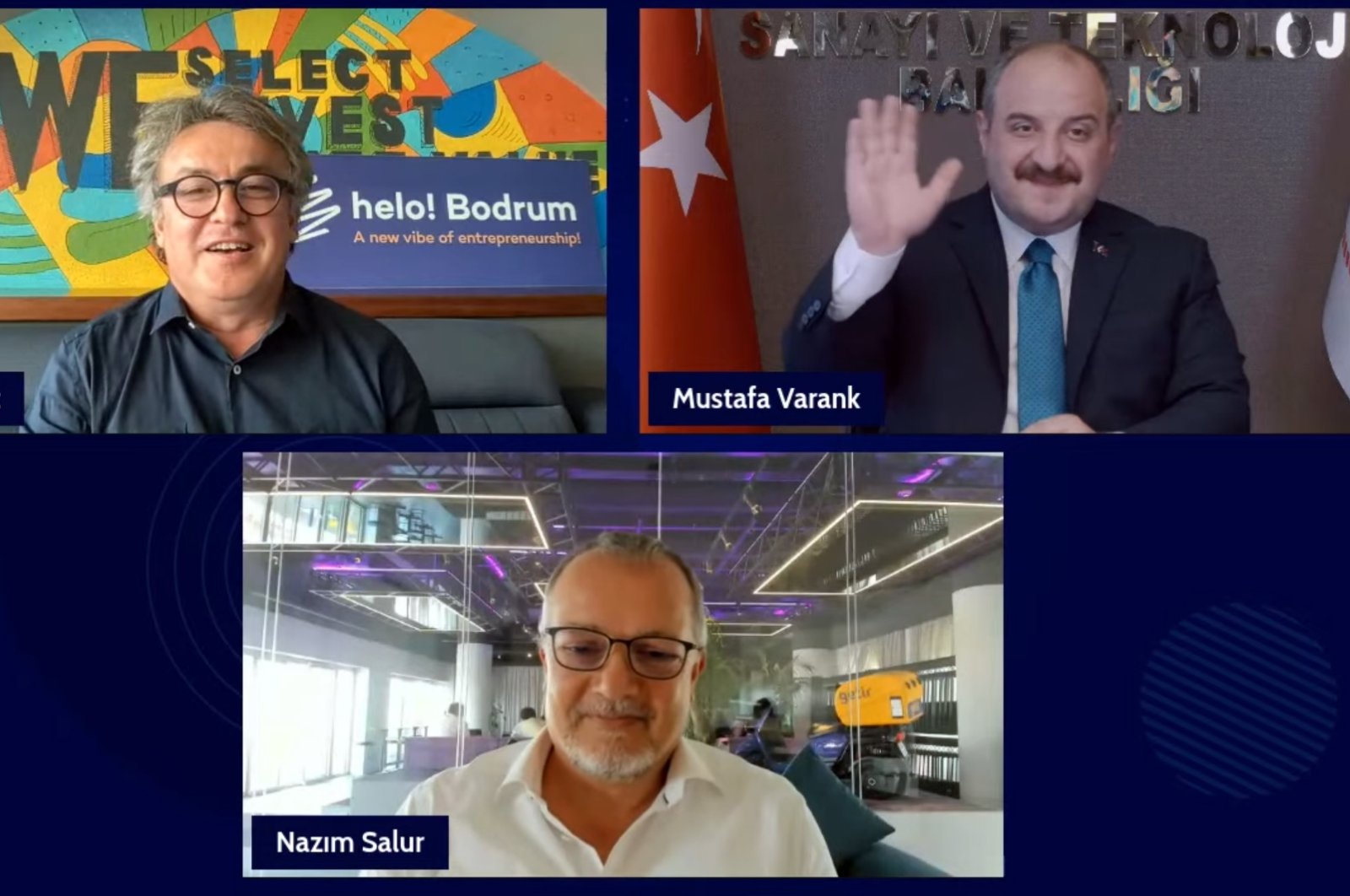 Turkish startups received nearly $1.3 billion investment in the first half of the year, with Dream Games and Hepsiburada joining the billion-dollar league that included Peak, Getir and Trendyol

Funding received by Turkish startups from January through June this year has carried Turkey into the billion-dollar investment league, according to startup monitor startups.watch data.

Figures announced at an event this week revealed that the Turkish ventures received a total of $746 million (TL 6.35 billion) in investments in the April-June period alone through 63 deals.

This brought the total investment amount in the first half of the year to nearly $1.3 billion with 129 deals.

Mobile games startup Dream Games in June raised $155 million in Series B investment round, the largest of its kind in Turkey. The round valued the business at $1 billion, making it Turkey’s latest unicorn – a term for startups that pass the $1 billion mark.

Rapid grocery delivery company Getir saw its valuation tripling to over $7.5 billion since March as it eyes to expand to several cities in the U.S. following its rollout in southern Europe in the first half of the year.

Within the scope of the angel and venture capital (VC) investments, Turkey ranked eighth in Europe and second in the Middle East and North Africa in the second quarter, the data showed.

Given the angel investment and venture capital investments per capita, $8.8 per capita was invested in Turkey in the second quarter. With this statistic, Turkey surpassed countries such as Italy, Greece, Portugal, Russia and Poland.

Around 14 gaming startups received investment in the second quarter, bringing the overall figure in the first half to 29.

The number of billion-dollar startups in Turkey has reached five with Peak, Getir, Trendyol, Hepsiburada and Dream Games.

Among others, five funds with a total of $91 million have been established so far this year.

Stating that this success was not a coincidence but was proven with the emergence of Getir and Dream Games as new Turcorns at the beginning of this year, Varank said Turkey still has a long way to go to reach "the goal of achieving at least 10 Turcorns by 2023."

The minister pointed out that the performance of the startup ecosystem in the second quarter of 2021 confirms this.

Varank recalled that 63 startups from Turkey received an investment of $746 million in the last three months.

"With this performance, our country surpassed many European countries such as Finland, Norway, Austria, Denmark, Ireland, Italy and Belgium. When we look at the first six months of the year, we see that 129 startups from our country reached an investment volume of nearly $1.3 billion."

The minister also pointed out that venture capital funds are vital for the startup ecosystem. "TechInvesTR comes first among the funds we have created," he continued. "In the program, we developed in cooperation with TÜBITAK (Scientific and Technological Research Council of Turkey) and the Treasury and Finance Ministry, we created a 'fund of funds' mechanism. Through this fund, we will contribute to five venture capital funds that will invest in Turkey. In this way, we anticipate reaching a fund size of approximately TL 1.7 billion ($199 million) and investing in approximately 150 technology-based early-stage startups."

He also stated that they also support entrepreneurs through development agencies, TÜBITAK and Small and Medium Industry Development Organization (KOSGEB).

"Within the scope of the TÜBITAK Individual Young Entrepreneur Program (BIGG) program, we have opened 12 calls and received more than 35,000 business idea applications. We turned 4,500 business ideas into business plans and evaluated them in the second stage panels. Some 1,500 of them were entitled to receive support and established techno-enterprise companies. The amount of support we have provided to these companies has approached TL 300 million," he added.

Varank also asked Getir founder Nazım Salur, who also attended the event, about his plans to support new entrepreneurs and if he is considering establishing a venture capital fund.

"This is our debt to Turkish society, to these lands. We just have to get the timing right," Salur answered and continued: "We started to invest in startups related to Getir's business. If we lead by creating some funds in the coming years, many of our friends and colleagues say, 'We will also invest in the fund.' I think we can raise several hundred million dollars in funds here. We have to do this at the right time. That's what I intend to do in the next few years."

Regarding the opening to the stock market, Salur also said: "We find the money from venture capital funds under the conditions we want. There are advantages and disadvantages of collecting investments from the stock market. I don't think we will need it in the next two years, as we currently find it in suitable conditions."

He underlined that with the recent investments, the main focus will be on the U.S. market. "We are currently satisfied with the figures in Europe. There was a ready-made organization for Italy, Spain and Portugal. We incorporated it with the acquisition."

Salur was referring to Getir's recent acquisition of Blok, a Spanish instant delivery service. Blok is active in Spain and Italy, where its biggest markets have been Madrid, Barcelona and Milan.

"We will act according to the results of the pandemic in South America. However, with our latest investment, our main focus will be on the U.S. market. Our success here will be decisive," Salur said, adding that the pandemic did not have an impact on their success and that post-pandemic numbers proved this.

Getir began its global expansion in January. It launched in London in the first month of the year and started providing its services in Amsterdam in May.

Last month it launched its services in Paris and Berlin. Several cities in the United States are to follow in the last three months of the year.

One of Turkey’s leading information and communication technologies companies, Türk Telekom, continues to strengthen the startup ecosystem by supporting startups with innovative ideas. Members of its startup acceleration program, PILOT, were announced recently.

Some 18 teams that develop qualified and original technology solutions, focused on artificial intelligence (AI), were selected for PILOT and will each receive a TL 200,000 cash support.

Türk Telekom Strategy, Planning and Digital Assistant General Manager Barış Karakullukçu stated that they have increased the number of startups that will participate in the program in the new period and the cash support provided.

New investments on the way

"As Türk Telekom, our goal since the first day is to support entrepreneurs, strengthen the startup ecosystem, and provide innovative products and services to our customers by collaborating with startups," Karakullukçu said. "With PILOT, we offer cash capital and mentor support that startups need most. We also provide startups with the opportunity to cooperate with Türk Telekom, trainings, business connections and access to investors, and we are growing startups by investing with TT Ventures. As of this year, those selected among the teams participating in the PILOT program will also have the opportunity to participate in the 4-week U.S. program of the world's largest innovation platform Plug&Play. I congratulate each and every startup chosen."

The 18 teams selected as a result of the applications will have access to a wide network of mentors, major investors and business contacts of Türk Telekom throughout the program. Teams will also participate in various pieces of training during the program, they will receive office space, technology infrastructure, mobile communication package and promotional support. At the end of the program, teams selected from among 18 startups will participate in the four-week U.S. program of Plug & Play, one of the world's largest innovation and venture capital platforms. In this way, startups will have the opportunity to introduce their ideas to investors around the world and to collaborate with global companies.

Türk Telekom has provided over TL 5 million in cash support to 73 PILOT graduates to date, while graduate enterprises employed 850 people last year and achieved a turnover of TL 60 million. Meanwhile, 31 of the graduate startups received investment.