Investments in Turkish startups outperform 2020 in only 2 months 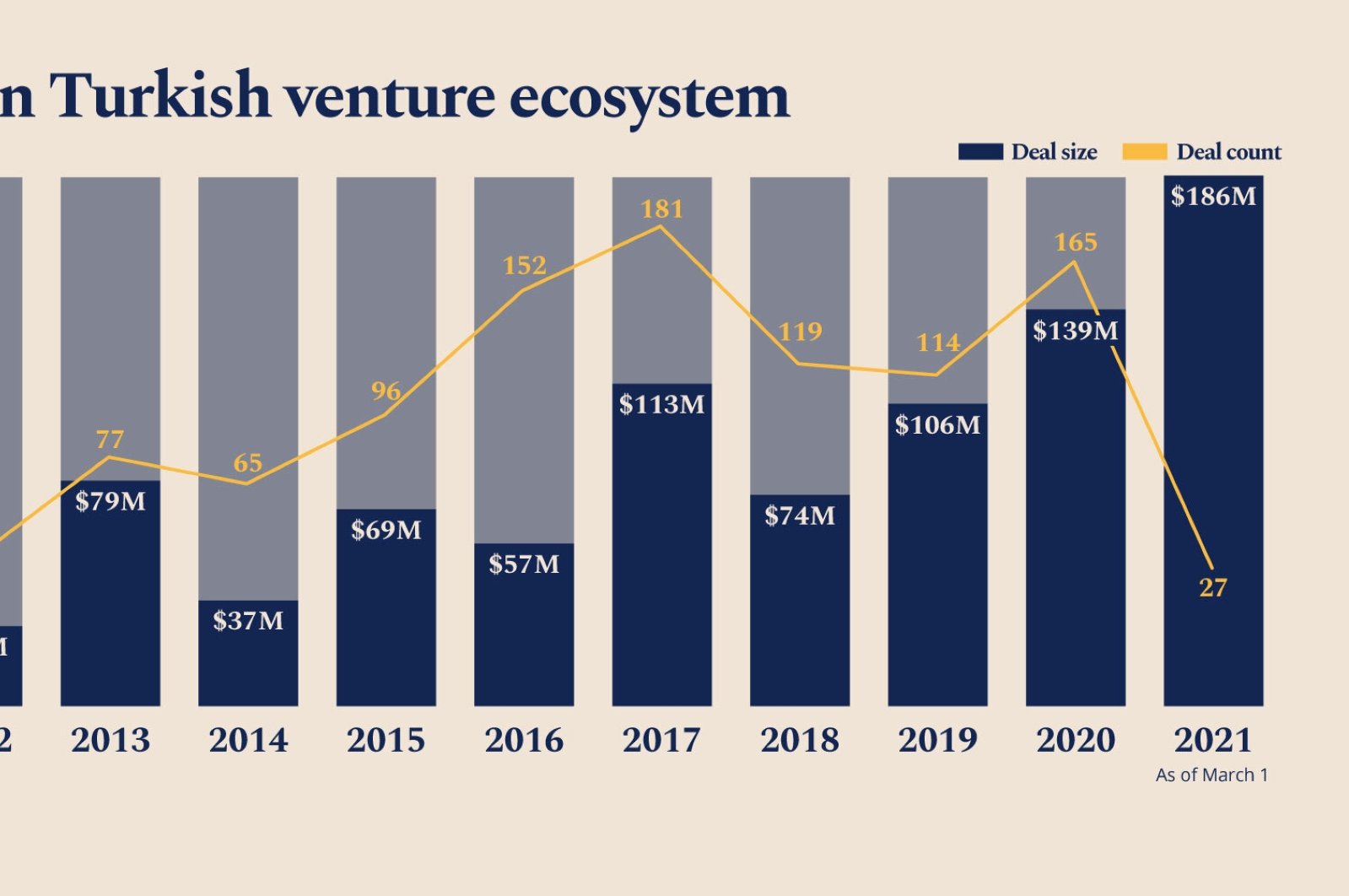 An infographic shows the number and amount of investments made in the Turkish startup ecosystem. (By Adil Girey Ablyatifov / Daily Sabah)
by Timur Sırt Mar 05, 2021 2:43 pm

The Turkish startup ecosystem needed only two months in the new year to receive investments that surpassed the total amount of the whole of 2020, with on-demand rapid delivery pioneer Getir grabbing the largest funding of $128 million

The investments in the Turkish venture ecosystem needed only two months into the new year to leave behind the whole of coronavirus pandemic-ravaged 2020.

A total of $186 million was invested in 27 startups in January and February, according to a report by the startups.watch, which regularly monitors the investment data of the Turkish entrepreneurship ecosystem.

The figure thus surpassed the total amount of 2020, which also marked the highest annual investment amount ever made in the Turkish startup ecosystem, even before the end of the first quarter.

A total of $139 million was invested in 165 startups throughout 2020, according to startups.watch data.

Turkish on-demand rapid delivery pioneer Getir alone accounted for $128 million, which it raised from investors in January. The funding round valued the company at about $850 million.

In the same month, Getir stepped into its global journey as it launched its rapid delivery service for grocery and corner shop items in London.

The trend continued in February as well as 13 startups received $56.4 million in investments.

This also marked the largest Series A raised by a gaming startup in Turkey to date.

The successful sales agreement of gaming companies such as Peak and Rollic seems to have been reflected at the end of 2020 and the first two months of 2021.

The gaming startups began to attract investors not only from abroad but also domestically. According to the startups.watch report, eight of the 27 investments made in the first two months of this year were made in gaming ventures.

With the second fund of 500 Istanbul worth $36.4 million and the Informatics Valley GSYF fund of approximately $14 million, a new fund of around $50 million in total was established.

The total size of the fund founded between 2018-2021 and allocated to the Turkish market has reached $618 million in total.

Successful startups emerging from Turkey on a global scale are exciting for the entrepreneurship ecosystem.

The investment pool grows in parallel to investors getting the return of their investment with sales agreements.

Getir and gaming startups gearing up to do business on a global scale end up bringing in huge investment rounds.

The Turkish fast-delivery firm is about to start operating in Paris following its entry into the U.K. market via London. Its next steps are set to be the Netherlands’ capital Amsterdam and Germany’s Berlin.

As with the investments made in the first two months of 2021, huge investment tours have also taken place. The fact that two startups alone received investments of more than $50 million has ended up in a record investment figure that exceeds the annual average.

Alesta Yatırım and WePlay Ventures attracted attention as the most active investors of the first two months of 2021 with four different investments each.

Only two startups founded by female entrepreneurs, namely Innejoy and ESA Esports, have managed to receive funding in the first two months.

Startups boom in US, Turkey during pandemic

On the other hand, Turkey and the U.S. were among the countries where startup business activity grew the most last year despite the health catastrophe and one of the worst economic downturns in modern history.

Business startups in the U.S. grew from 3.5 million in 2019 to 4.4 million in the first three quarters of 2020, a 24% increase, according to the U.S.-based Peterson Institute for International Economics (PIIE).

Turkey followed with a significant increase of 23%. New investments indicate that Turkey’s growth trend will continue in 2021.

Among others were Chile with 14% and the U.K. with 9%. Startup activity in China barely budged, growing by 3% in the first three quarters of 2020 relative to 2019, according to the PIIE.