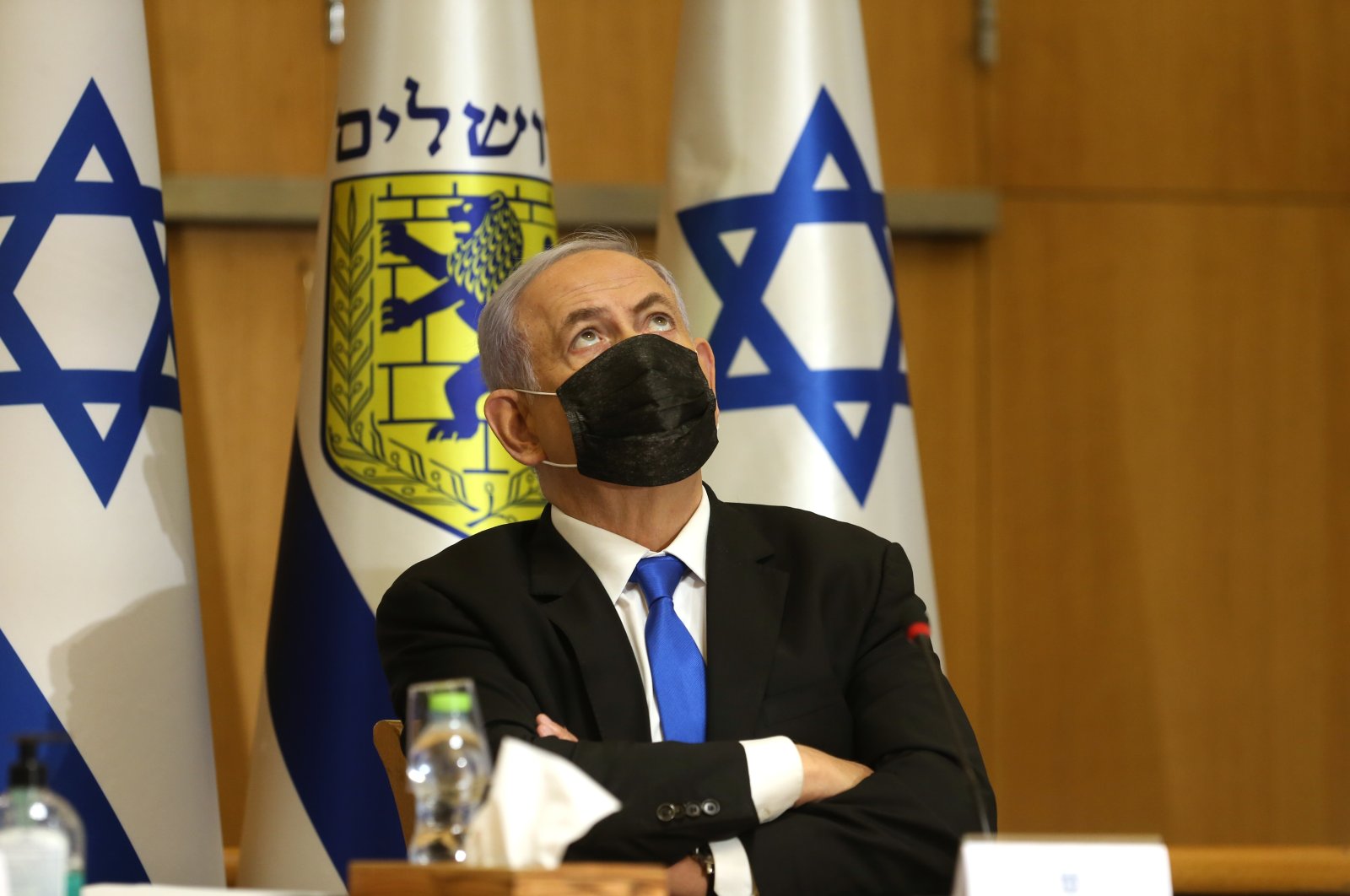 Israeli Prime Minister Benjamin Netanyahu attends a special Cabinet meeting on the occasion of Jerusalem Day, at the Jerusalem Municipality building, in Jerusalem, May 9, 2021. (AP Photo)
by Talha Köse May 17, 2021 12:05 am
RECOMMENDED

Tel Aviv's decision to evacuate the Palestinians from their homes in the Sheikh Jarrah neighborhood in Eastern Jerusalem raised tensions among Palestinians.

The holy month of Ramadan was explicitly selected by Netanyahu to escalate the conflict in the holy city Jerusalem. Muslim worshippers were targeted by Israeli forces and radical Jewish groups, which triggered further violence.

Desecrating a holy site during Ramadan through the use of dirty tactics was a surefire way to escalate protests. As expected, the protests got out of control immediately due to the disproportional response of Israeli forces.

What was unexpected in the latest episode of brutality was the spread of the violence into Israeli territories.

With the Iron Dome and the protective walls, the Israeli side considered themselves relatively safe.

The latest developments have demonstrated that the Israelis are in fact not safe if they continue to encourage their apartheid system that consistently humiliates Arabs and violates their basic needs.

The expansion of settler colonialism also unified Palestinian factions that were politically fragmented.

Hamas fired rockets against Israel to stop the Jerusalem raid, and the Israeli Defense Forces' (IDF) bombardment of Gaza resulted in the indiscriminate killing of Palestinian civilians.

More than 10,000 Palestinians had to evacuate their homes in Gaza. Hamas fired more than 2,000 rockets in retaliation against Israel's aggression.

Most of the Hamas rockets were intercepted by the Israeli Iron Dome defense system. Nine Israelis have been killed, according to Israel media.

The death and destruction caused by the IDF's sweeping bombardment during Ramadan Bayram, also known as Eid al-Fitr, caused outrage in many Muslim countries.

Jordanian citizens raided the country's border with Isreal, standing in solidarity with the Palestinians.

This time the Arab citizens of Israel were also the targets of Israeli fanaticism. The risk of civil war in Israel stimulates radical Jewish groups' hate campaigns against Arab Israelis.

The Netanyahu administration is struggling to eradicate the moderate political option on both the Israeli and Palestinian sides.

Since the Al-Aqsa Intifada, which was triggered by former Israeli Prime Minister Ariel Sharon’s provocative visit to Temple Mount with a group of radicals in 2000, extremist groups have been taking up more space in the Israeli political spectrum.

These exclusionary and militant groups strengthen their political base and make a political deal between the Palestinians and Israel impossible.

Over the course of the decades, the Palestinian identity has been denied and a fair political solution to the Palestinian-Israel conflict rejected, as Israeli right-wing groups only get more demanding.

These groups engage in increasingly hostile political discourse targeting Arabs, Muslims and Palestinians. Israeli settler colonialism and the practices of the apartheid system are becoming mainstream.

To support these radical Israeli factions in a potential fifth consecutive election held within two years, the Netanyahu administration is increasing its pressure on Palestinians in the West Bank.

To save his political career and consolidate the support of radical factions in Israel, Netanyahu executed more bloodshed.

The Sheikh Jarrah neighborhood was the latest target of Israeli expansionism, but it will not be the last. In the early years of his power, Netanyahu and the coalition of Israeli rights benefited from such an extreme right transformation.

Still, they are eventually trapped by their game plan. They raised the bar so high that they can hardly satisfy the expectations of radical Israeli groups.

Netanyahu and his political allies’ practices and policies were supported without hesitation during the Trump administration.

Despite the presidential change in Washington, the policies that favor radical right-wing extremism in Israel remain in place. Washington and the signatories of the Abraham Accords are also responsible for encouraging Netanyahu's relentless acts of aggression.

The radical Israelis who joyfully cheered and celebrated the violence in the court of the Al-Aqsa complex were illustrative of the political transformation and radicalization in Israel.

Americans and the European public must understand that the Israel they back today is quite different from 20 years ago. Moderate voices are silenced and Jewish fundamentalism has gained momentum in Israel.

The unconditional support of the U.S. and Europe only strengthens the radicalization process in Israel and undermines the possibility of a fair solution to the Palestinian-Israeli conflict.

Targeting the public and destroying the civilian infrastructure in Gaza has become routine practice for the Israeli security forces. The impunity enjoyed by Israel when carrying out civilian massacres of Palestinians only encourages the IDF and decision-makers to act more aggressively.

International law, humanitarian principles and all international norms are defunct when Palestinian civilians are concerned.

The Israeli side's transformations and radicalization have affected the Palestinian side too. Palestinian actors are becoming more fragmented and losing hope in reaching a fair, negotiated political settlement.

Nowadays the more than 2 million Israeli citizens of Arab origin face the pressures of apartheid practices. The same actors who once criticized Hamas are now more sympathetic toward the armed factions of the resistance group.

Portraying the recent violence as a conflict between Hamas and the IDF is misleading.

First of all, the Israeli administration and radical Israeli groups and settlers are targeting Palestinians everywhere. The majority of the victims from both sides are innocent civilians who do not have the capacity or resources to defend themselves.

Hamas and a few other militant groups in Palestine will become more popular given that they are the only means of defense the Palestinian side has available.

A fair solution to the Palestinian-Israeli conflict is possible only once a sustained reduction of tension has taken place and confidence-building efforts have been determined. These efforts may allow for the formation of moderate political groups that can advocate for a fair political solution from both sides.

Appeasing Israeli radicalism will only deepen the problems in the Palestinian-Israeli conflict and prevent a peaceful solution. It is now the responsibility of the international community, especially American and European actors, to put pressure on Israel's radicalism and make way for moderation.