Are Palestinians freedom fighters or not? 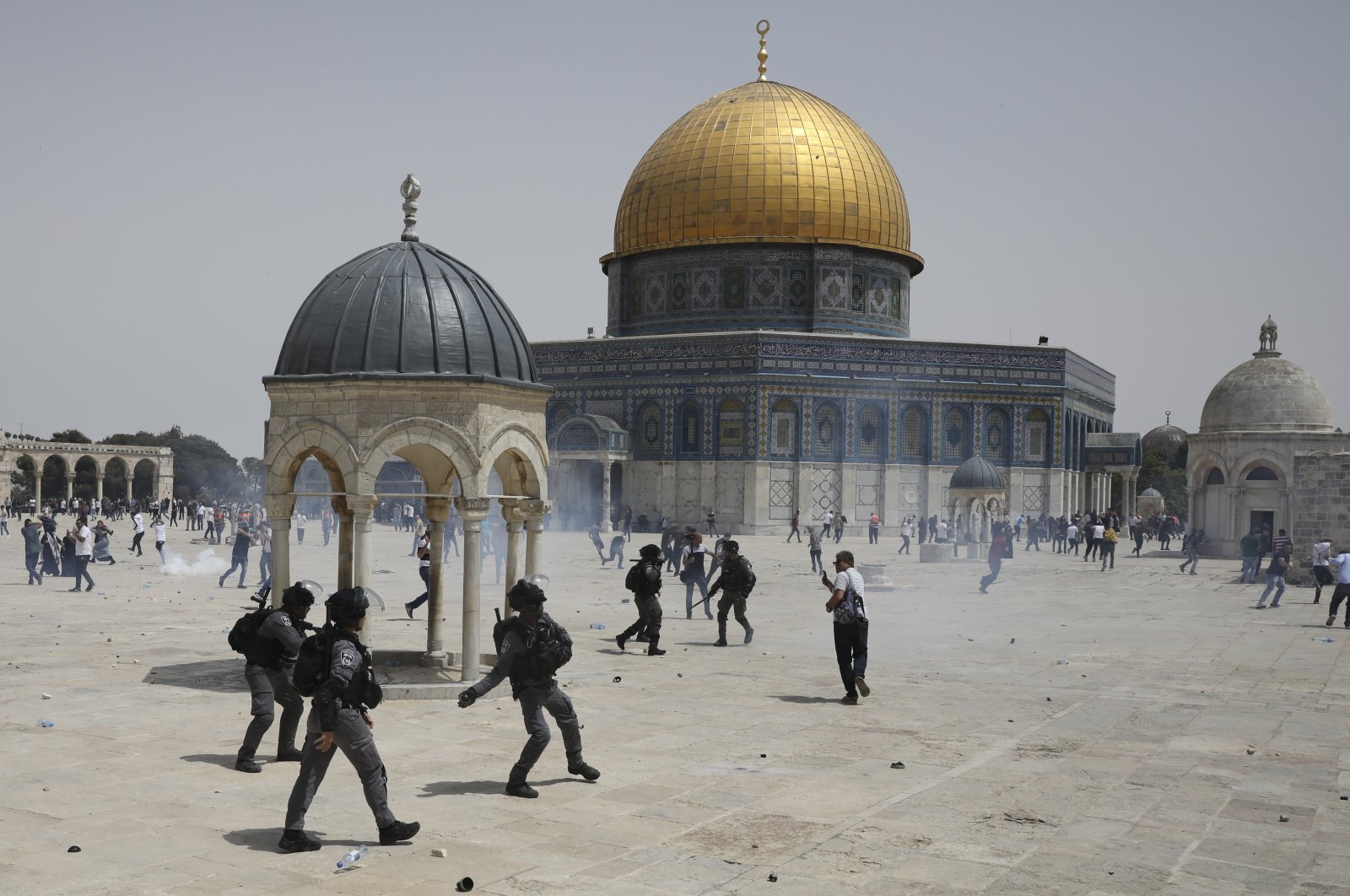 Palestinians run from stun grenades thrown by Israeli police in front of the Dome of the Rock in the Al-Aqsa compound, East Jerusalem, occupied Palestine, May 21, 2021. (AP Photo)
by Büşra Göktaş May 27, 2021 12:05 am
RECOMMENDED

The crucial question seeks an answer to whether Israel conducts counterterrorism or if its a terrorist state.

It is a well-known saying that “one man's terrorist is another man's freedom fighter.” The situation is known as the Nelson Mandela problem. Late legendary South African President Mandela remained on U.S. terrorist watch lists until 2008 although he is remembered around the world as a symbol of freedom and peace for ushering South Africa into a democratic and post-apartheid future.

There is no universally agreed-upon definition of terrorism in international law. A number of treaties, U.N. resolutions and the legislative and judicial practice of state have attempted to form a general opinion in the international community about terrorism.

Terrorism is basically acts of violence that target civilians or non-combatants in the pursuit of political or ideological aims, according to a U.N. Security Resolution. Who are those killed in Palestine? Civilians, non-combatants or terrorists?

The Israel Defense Forces (IDF) announced the results of their “Operation Guardian of the Walls” that it conducted between May 10 and May 17. At least 130 "terrorists neutralized" and 820 "terrorist targets" struck. However, 12 Israelis dead, including two children, by rocket attacks from Hamas, the group that governs the Gaza Strip.

Before the deadly operation, Israeli Prime Minister Benjamin Netanyahu said that “this evening, Jerusalem Day, the terrorist groups in Gaza crossed a red line on the eve of Jerusalem Day, a red line, and attacked us with rockets on the outskirts of Jerusalem. Anyone who attacks Israel will pay a heavy price."

Israel asserts having self-defense rights on the grounds that Hamas and other groups in Palestine are terrorist organizations that are harmful to their territory, capital, citizens and soldiers. It is just counterterrorism, and Israel is “working to ensure freedom of worship and tolerance for all,” Netanyahu added.

How did the violence begin?

During the Muslim holy month of Ramadan, an ethnic cleansing campaign was conducted by Israel in the Sheikh Jarrah neighborhood of occupied East Jerusalem. Palestinians families were being forcibly expelled from their own home by the Nahalat Shimon occupier organization. Israel continues the yearslong effort to seize Palestinian properties and hand them over to Israeli settlers.

The Fourth Geneva Convention, which is relative to the protection of civilian persons in time of war, states that “the Occupying Power shall not deport or transfer parts of its own civilian population into the territory it occupies.”

Regardless, the Palestine refugee crisis has been ongoing from Nakba to Gaza to Sheik Jarrah for many years under the nose of the international community.

Israel’s aggression has been met with protests by Palestinians.

The United Nations Office of the High Commissioner for Human Rights (OHCHR) called on “Israel to immediately halt all forced evictions.” Israel’s Supreme Court temporarily postponed the forced expulsions due to the escalation. A new date will be determined within the next 30 days.

After Israel’s assault in Sheik Jarrah, Palestinian worshippers, including women and children, packed the mosque and many stayed to protest peacefully.

The rising tension reached a tipping point on Monday, May 10th, when Israeli police stormed the Al-Aqsa Mosque during prayers. Hundreds of Palestinians were wounded by plastic bullets and stun grenades.

Do Palestinians, homeowners in occupied East Jerusalem, not have self-defense rights? U.S. State Department spokesperson Ned Price said the rocket attacks by the Palestine armed group were an "unacceptable escalation."

Moreover, U.S. President Joe Biden said that Israel had a “right to defend itself against rocket attacks from Hamas and other terrorist groups in Gaza.” However, the White House avoids the term "self-defense" when talking about the rights of Palestinians.

How does Israel use their "self-defense rights?" Israel launched “Operation Guardian of the Walls” with one of the world’s most modernized armies equipped against Palestine, which has no real state nor regular army, on May 10.

At least 219 Palestinians, including 63 children and 36 women, have been killed and more than 1,530 others wounded in the Gaza Strip. Besides, in the West Bank, at least 15 Palestinians had been killed since hostilities flared up, the local health minister said.

Explosions rocked Gaza Strip from north to south in the bombardment that was well-organized by nuclear-armed heavily militarized Israeli Forces. Dozens of buildings were destroyed or damaged. Israel sent warning shots to Gaza residents so they could narrowly escape just before the bombs rained down. Should the Palestinians be thankful?

Israeli airstrikes also bombed a Gaza media building, which was an 11-story apartment block housing the media offices of Al-Jazeera and the Associated Press (AP), as well as residential apartments. Jawad Mahdi, the owner of the building, pleaded over the phone with an Israeli intelligence officer, “give us 10 minutes.” An AP journalist said that “we have a lot of equipment, including the cameras, other things, I can bring all of it out.”

The Israeli intelligence officer told him: “There will be no 10 minutes.”

Minutes later, the building was destroyed and then the IDF tweeted that the destroyed building “was an important base of operation for Hamas military intelligence.”

Yesterday, we targeted an important base of operations for Hamas' military intel in Al Jala Tower in Gaza.

The base gathered intel for attacks against Israel, manufactured weapons & positioned equipment to hamper IDF operations.

Safwat al-Kahlout, an Al-Jazeera reporter, said, “I have been working in this office for more than 10 years and I have never seen anything about military interests of the Hamas intelligence.”

Geneva Conventions explicitly protect journalists with Article 79, which states that “journalists engaged in dangerous professional missions in areas of armed conflict shall be considered as civilians.” Still, even civilians have been killed in Palestine.

On the same day, 10 members of a single family – two women and eight children – were killed by Israeli air raids that hit the Shati Refugee Camp in the Gaza Strip.

Mohammed Hadidi told reporters that his wife and four sons – Wisam 6, Abdelrahman 8, Yahya 11 and Suheib 14 – were all killed when they went to celebrate the Ramadan Bayram, also known as Eid al-Fitr holiday with relatives. Palestinian officials and neighbors said that the refugee camp had been attacked without warning.

In a statement after the bombardment on the Shati Refugee Camp, the IDF said it had “attacked a number of Hamas terror organization senior officials, in an apartment used as terrorist infrastructure in the area of the Al Shati refugee camp.”

After each bombardment, Israel used the terms "terrorist target" and "terrorists neutralized." Fifty-eight Palestinian children cannot be considered terrorists under any circumstance in international law.

Regardless of who is killed, Israel claims the civilians are "human shields" used by the terror organization. After the allegation of terrorism, "human shields" is the second argument of Israel.

When Rachel Corrie, the American peace activist, was crushed to death beneath an Israeli army bulldozer in 2003, Israel asserted she was a shield as well.

“Israeli soldiers, police and security guards have unlawfully killed and injured many Palestinian civilians” on the grounds that they are terrorists or, if not terrorists, human shields to put the blame on Hamas for high civilian casualties.

After 9/11, the conceptualized "war on terrorism" has mostly been used by states to legitimize their attacks. If this concept is not enough to kill civilians, then the term "human shields" is put forward.

Although Mandela was removed from terrorist watch lists, his freedom is "incomplete without the freedom of the Palestinians,” as he said.