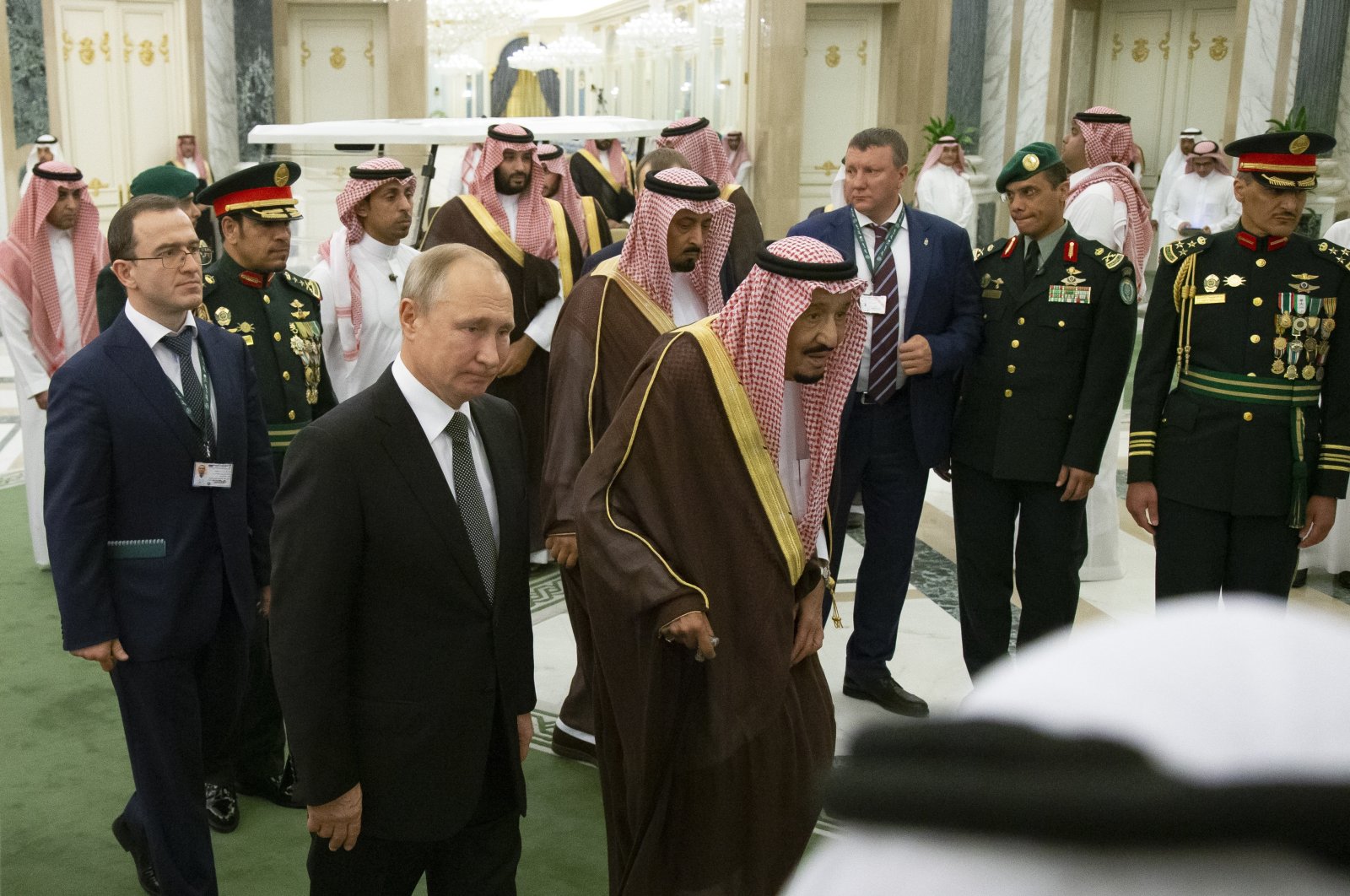 The Saudi leadership is currently contending with the post-Donald Trump era’s new realities. U.S. President Joe Biden is the new sheriff in town, thus there is no longer an American president in the White House bending over backward to defend Saudi Crown Prince Mohammed bin Salman (MBS).

From Trump’s reaction to the murder of Saudi journalist Jamal Khashoggi to his administration’s strong support for the Saudi-led military campaign in Yemen, Biden’s predecessor was perhaps the most Saudi-friendly American president ever.

As a candidate, Biden made it clear that he would deal with the Saudi kingdom, which the former vice president called a global “pariah,” in very different ways. By temporarily freezing arms sales to Riyadh and ending U.S. support for Saudi Arabia’s “offensive” military operations in Yemen, Biden is to some extent making good on these campaign promises.

It is fair to ask how Riyadh might look to foster stronger relations with “alternative powers” in order to offset risks amid the Biden era. This raises questions about how Biden’s presidency might serve to push Saudi Arabia closer to Russia, especially if Riyadh seeks to further diversify its global partnerships at a time in which the kingdom is less confident in the U.S. as a security guarantor.

To be sure, the strengthening of relations between Saudi Arabia and Russia goes back a number of years, predating Biden’s presidency.

Although the Syrian crisis that erupted in 2011 fueled high levels of friction between Riyadh and Moscow, once the Saudi kingdom essentially came to terms with the fact that Bashar Assad’s government essentially “won” the civil war, Riyadh began looking at Moscow differently.

The Saudis did not welcome the Russian intervention in defense of the Iran-backed Damascus regime; however, the kingdom’s leadership did take stock of Moscow’s decisive action, which contrasted significantly from the Barack Obama administration’s decision in Syria, particularly regarding the “red lines” fiasco from 2013.

The lesson learned by various Arab regimes, including Saudi Arabia’s, was that Russia stands by its allies and partners in the region unlike the U.S., which more Gulf states began seeing as increasingly unreliable.

King Salman’s historic visit to Moscow in October 2017 was a watershed in bilateral relations. While the Russians hosted Saudi Arabia’s ruler, the two countries signed 15 agreements with the Russian Direct Investments Fund (RDIF) and Saudis' Public Investment Fund (PIF), agreeing to make investments worth more than $1 billion along with the launch of projects in domains that included energy, defense, petrochemicals, logistics, technology and transport infrastructure.

During the king’s visit, the Saudis signed an agreement to purchase Russia’s S-400 missile defense system – a troubling sign for Washington, which has staunchly opposed its allies and partners in the region such as Turkey and Iraq looking to the Kremlin for this air defense system.

One year later, the Khashoggi murder case afforded Russia’s leadership the chance to bring MBS closer to Moscow and further away from the West.

While the outrage over the dismemberment of Khashoggi at the Saudi Consulate in Istanbul in October 2018 severely damaged MBS’s reputation and image in the West, Putin’s government made it clear to Riyadh that this file would not interrupt the upward trajectory in Russian-Saudi relations.

The G-20 summit in Argentina, held less than two months after Khashoggi’s killing, highlighted this dynamic. This became especially apparent when Putin high-fived MBS at the event where Western officials were keen to avoid being cordial to the Saudi crown prince, at least when cameras and journalists were present.

The message is clear: Russia is content to continue investing in stronger ties with Saudi Arabia without allowing human rights issues to strain bilateral relations.

Putin’s response to the Aramco attacks of September 2019 was also illustrative of the Kremlin’s efforts to further capitalize on Riyadh’s growing unease with its reliance on Washington as the kingdom’s security guarantor.

Shortly after that episode, Putin was in Ankara with President Recep Tayyip Erdoğan and Iranian President Hassan Rouhani when he responded to the attacks on the Saudi oil infrastructure.

From the Turkish capital, Russia’s head of state took advantage of the opportunity to tell the Saudis that they ought to follow in Turkey and Iran’s footsteps in terms of deepening defense relations with Moscow.

Putin stated, “We are ready to provide respective assistance to Saudi Arabia, and it would be enough for the political leadership of Saudi Arabia to make a wise government decision – as the leaders of Iran did in their time by purchasing S-300 and as President Erdoğan did by purchasing the latest S-400 ‘Triumph’ air defense systems from Russia.”

He went further, maintaining that Russian weaponry would be able to protect Saudi infrastructure from any such future attacks.

Today, one month into the new U.S. administration, the Washington-Riyadh partnership is strained. The Saudis are not pleased about the fact that Biden, as a presidential hopeful in 2019, said the Saudi regime has “very little social redeeming value.”

Nor is it welcome news in the kingdom that the U.S. leadership plans to soon release an unclassified summary of findings of MBS’s purported role in Khashoggi’s killing.

Putin’s government has demonstrated to MBS that Moscow will not put any pressure on Saudi Arabia (or any Arab state) when it comes to human rights.

These dynamics give the Kremlin an opportunity to strengthen Russia’s relations with Riyadh – a factor which the Biden administration cannot ignore.

While Moscow continues pushing to create a more multipolar world, Russia will likely work hard to bolster its ties with Saudi Arabia at the expense of the Washington-Riyadh partnership as Saudi officials worry about the kingdom’s relationship with Biden’s administration.

Limits to the partnerships

Looking ahead, there is quite a bit about Putin’s foreign policy that MBS and others within the Saudi leadership will find appealing.

Furthermore, as Russia lacks the type of democratic institutions and civil society that exist in the U.S. and European countries, MBS knows that public opinion in Russia will have less bearing on Moscow’s dealings with Riyadh compared to the ways in which Washington and London approach their historic partnerships with the kingdom.

There is every reason to expect the Russians to continue promoting their brand in the Arab region with Saudi Arabia being an important part of this audience.

Nonetheless, it is unrealistic to expect the Russians to quickly replace the U.S. as Saudi Arabia’s most important partner on the international stage.

As Arman Mahmoudian, an expert on Russia who is an advisor at Washington-based geopolitical risk consultancy Gulf State Analytics, explained, “Saudi Arabia sees Russia as leverage over the United States more than an alternative power to the United States.”

Two important factors will prevent the Saudis from ever considering a permanent geopolitical pivot away from Washington that establishes Moscow as the kingdom’s top international partner.

First, Russia is less powerful than the U.S. as a military force in the Middle East, particularly in the Arabian Peninsula.

Second, Moscow has an Iran-friendly foreign policy that has fueled “a sort of genuine distrust toward Russia on the part of the Saudi leadership.”

Until these factors change, Saudi Arabia will likely remain far more under the U.S.' influence than the Russians'.

The extent to which Putin can further capitalize on tensions between MBS and the West will be important to monitor when analyzing what comes next for Russia-Saudi Arabia relations.

Now that MBS no longer has Trump in the White House and there is a Democratic leadership in Washington, we could witness some strengthening of Moscow-Riyadh relations, albeit with real limitations.