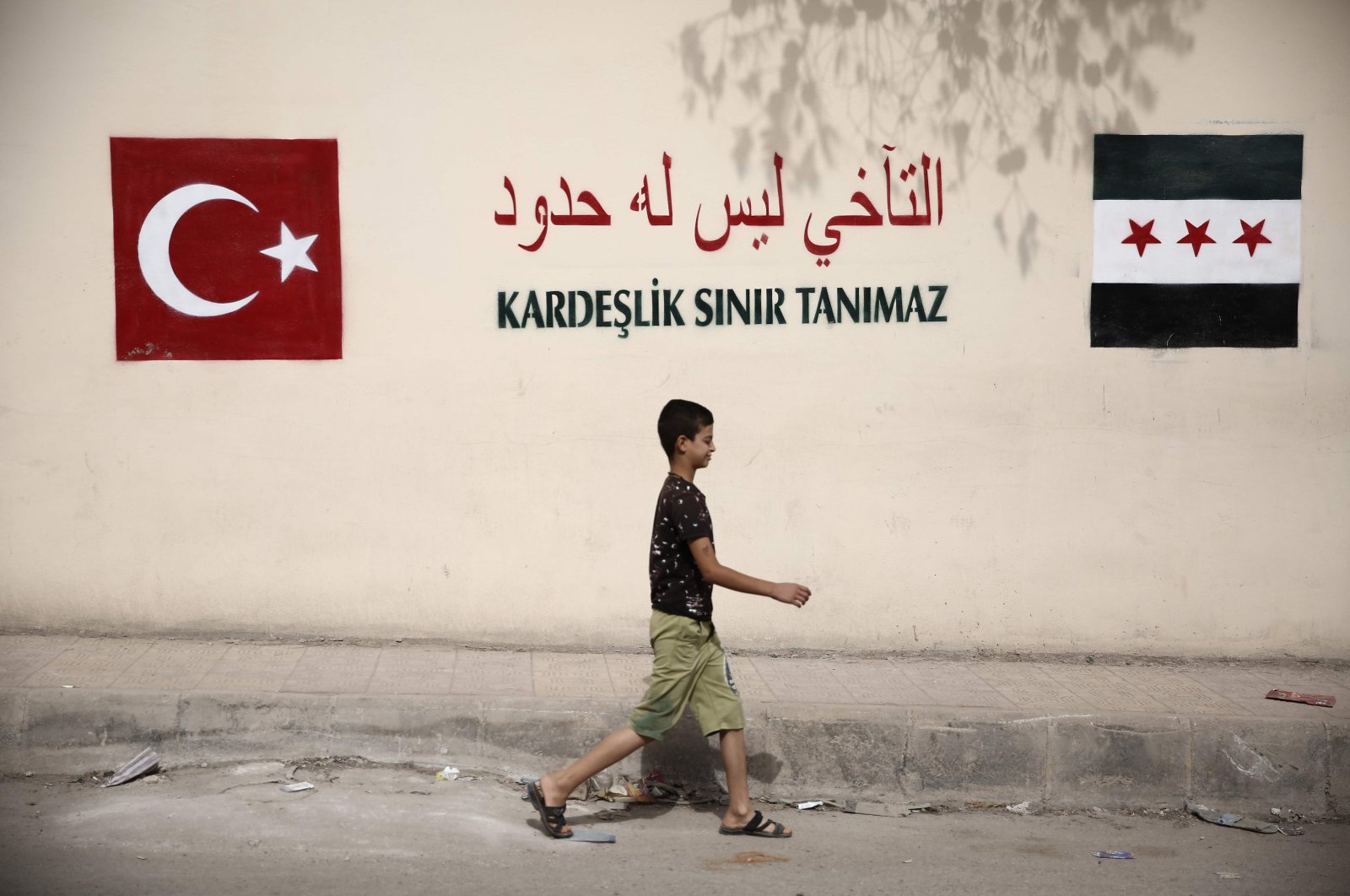 Evaluating Turkey's major foreign policy issues, top diplomat Çavuşoğlu said that the country takes initiatives to promote peace and cooperation in its region in line with principles based on fairness and legitimacy

In order to pave the way for peace and cooperation in its region, Turkey both makes plays when necessary and break the plays attempted to be set up against it, Foreign Minister Mevlüt Çavuşoğlu said Sunday.

In an exclusive interview, the top diplomat noted that Turkey stands at the center of the Euro-Asia region, which intensely feels the impact of the transitional periods in the international system and the existing crises.

"This region faces several challenges when the geopolitical balance is rehashed. We conduct our foreign policy based on an 'entrepreneur and humanitarian' approach. We also conduct our efforts for the solution of leading problems in the Middle East with a humanitarian, fair, principled and national attitude based on international law and legitimacy. When diplomacy comes to a deadlock, we take initiative by using our soft power and hard elements together for making the negotiating table functional again," he explained.

Evaluating the main issues in Turkey's foreign policy, Çavuşoğlu said that any energy project excluding Turkey in the Eastern Mediterranean with political motives does not have the chance to be successful. Underlining President Recep Tayyip Erdoğan's proposal for an Eastern Mediterranean conference with the participation of all actors in the region as the latest example of Turkey's sincere desire for cooperation, Çavuşoğlu said energy becoming an instrument for peace depends on the embracement of this approach by all regional actors and the use of resources in line with legitimacy and fairness principles based on international law.

Turkey, which has the longest continental coastline in the Eastern Mediterranean, has rejected the maritime boundary claims of Greece and the Greek Cypriot administration, stressing that these excessive claims violate the sovereign rights of both Turkey and Turkish Cypriots. Last year, Turkey sent several drillships to explore energy resources in the Eastern Mediterranean, asserting its own rights in the region as well as those of the Turkish Republic of Northern Cyprus (TRNC).

"We submitted our proposal to the EU side ... We discussed fair sharing. Both sides in Cyprus should attend. Or we can organize another meeting for them in a different form on a different platform. If we talk about fair sharing, we do not hesitate to come together with the Greek Cyprus administration in this format. But, if you do not want the TRNC to attend, the Greek side also cannot attend."

The island of Cyprus has been divided since 1974 when a Greek Cypriot coup aimed at Greece's annexation of the island was followed by violence against the island's Turks and Ankara's intervention as a guarantor power. It has seen an on-and-off peace process in recent years, including a failed 2017 initiative in Switzerland under the auspices of guarantor countries Turkey, Greece and the U.K. The TRNC was founded in 1983.

Last week, the United Nations announced that Secretary-General Antonio Guterres was inviting the leaders to an informal meeting in Geneva, Switzerland on April 27-29 “to determine whether a common ground exists for the parties to negotiate a lasting solution to the Cyprus problem within a foreseeable horizon.” The invitees also include the foreign ministers of the three “guarantors” of Cyprus’ independence – Greece, Turkey and Britain.

Once again noting that the dialogue is the only option to solve bilateral issues with Greece, Çavuşoğlu said Turkey has always reiterated that it is ready for dialogue, which international law also prioritizes. Adding that Greece was the side that refrained from dialogue, they sought EU support instead of discussing issues with us, the top diplomat said.

"When they finally came to the table, they choose to escalate tensions. The harassment targeting our Çeşme seismic vessel and Greek authorities' provocative remarks are the latest examples of this. An initial offer came from Athens for the next round of exploratory talks, but the date is not official yet," he said.

The two NATO allies have been at odds over a number of decades-old issues, including the extent of their continental shelves, overflights in the Aegean Sea and the ethnically split island of Cyprus.

In January, Turkey and Greece launched the first direct exploratory talks in nearly five years to address their disputes related to sovereign rights in the Eastern Mediterranean. That meeting in Istanbul, the 61st round, lasted only a few hours, but both sides said that they had agreed to meet again in Athens.

Turkey's Defense Ministry had also stated that Greece has continued its provocative rhetoric and uncompromising stance since exploratory talks were held in January, adding that Athens is misleading the international community with its remarks.

Çavuşoğlu also touched upon the relations with another important regional actor, Egypt, and said there is continuing contact with the North African country both on the level of intelligence and foreign ministries.

"I talked with (Foreign Minister) Sameh Shoukry. For example, during the U.N. meetings, we had long meetings on how to repair our relations. Depending on the course of bilateral relations, negotiations on maritime jurisdiction can be launched. Since we favor fair sharing, we want to talk with everyone."

Recently, Greek media reported that Egypt’s announcement of holding a tender for hydrocarbon exploration in the Eastern Mediterranean by recognizing the EEZ demarcated by Turkey could be a sign of a possible agreement between Ankara and Cairo on the issue. Greek daily Kathimerini said last month that in the eastern zone of the tender map, Egypt has paid attention to the continental shelf declared by Turkey to the United Nations after the agreement between Turkey and Libya in November 2019. The newspaper said that Cairo’s move could be interpreted as its reservation to get involved in the controversy about the Turkish-Greek continental shelf in the region, especially around Cyprus. Kathimerini also said that even though this move would not lead to an immediate reconciliation, it indicates that Cairo has left the door open to Ankara for future talks.

In November 2019, Turkey and Libya signed a maritime delimitation deal that provided a legal framework to prevent any fait accompli by regional states. Accordingly, the attempts by the Greek government to appropriate huge parts of Libya's continental shelf, when a political crisis hit the North African country in 2011, were averted. In response, Egypt and Greece signed an agreement in August 2020, designating an EEZ in the Eastern Mediterranean between the two countries.

The relations between Turkey and Egypt deteriorated after Gen. Abdel-Fattah el-Sissi toppled the country’s first democratically elected president, Mohammed Morsi, in a coup after only a year in office. Ankara has maintained its position that a democratically elected president cannot be deposed by a military coup and thus has voiced its criticism of el-Sissi and his backers, including the West and some of Ankara’s rivals in the Gulf region. The Egyptian government, on the other hand, urged Turkey not to intervene in an issue that it considers as belonging to the country's internal affairs. The dispute led to bilateral relations remaining deadlocked for many years. Recently, however, signs of a possible reconciliation have come from both countries, particularly due to the changing dynamics in the Eastern Mediterranean and the Turkey-Greece crisis over the region’s energy resources.

Çavuşoğlu also underlined the normalization period with France and said that both Erdoğan and French President Emmanuel Macron offered positive messages about this recently.

Turkey and France can cooperate to fight terrorism and contribute to ensure peace, security and stability in the region, Erdoğan told Macron in a video call last week.

Ankara has repeatedly traded barbs with Paris over policies in Syria, Libya, the Eastern Mediterranean and other issues including recent anti-Muslim policies in France, but the NATO members said last month they were working on a road map to normalize relations.

Regarding the Libyan crisis, Çavuşoğlu described Turkey’s role as a balancing power in the war-torn country.

“The war in Libya ended and the balance has been provided. Those who were disturbed by Turkey’s initiative in the past now accept that Turkey is a very important actor there. Everyone says that the cease-fire was reached thanks to Turkey and the political process was launched. The balance in the field paved the way for diplomacy,” he said.

Libya has been split for years between the internationally recognized Government of National Accord (GNA) in Tripoli and putschist Gen. Khalifa Haftar's eastern-based illegitimate forces. Turkey has supported the GNA and advocates for the peaceful resolution of Libya's problems.

Speaking on relations with Israel, Turkey’s top diplomat criticized the normalization deals some regional countries struck with the country, saying: "This does not contribute to efforts for a fair, comprehensive and permanent solution to the conflict and rather encourages Israel to deepen its policies on occupying Palestinian land.”

“It must be understood that unbalanced proposals ignoring established international parameters and fairness will not contribute to the solution of the Palestine-Israel conflict,” he pointed out.

Last year the United Arab Emirates (UAE) normalized relations with Israel, breaking with a longstanding Arab consensus that recognition should only come in exchange for concessions in the peace process with the Palestinians, which has been moribund for more than a decade.

Bahrain, Sudan and Morocco struck similar agreements shortly thereafter, in what the Donald Trump administration touted as a historic diplomatic achievement. President Joe Biden welcomed the accords and has said he will encourage the resumption of direct peace talks. The Palestinian Authority, however, viewed the agreements as a betrayal.