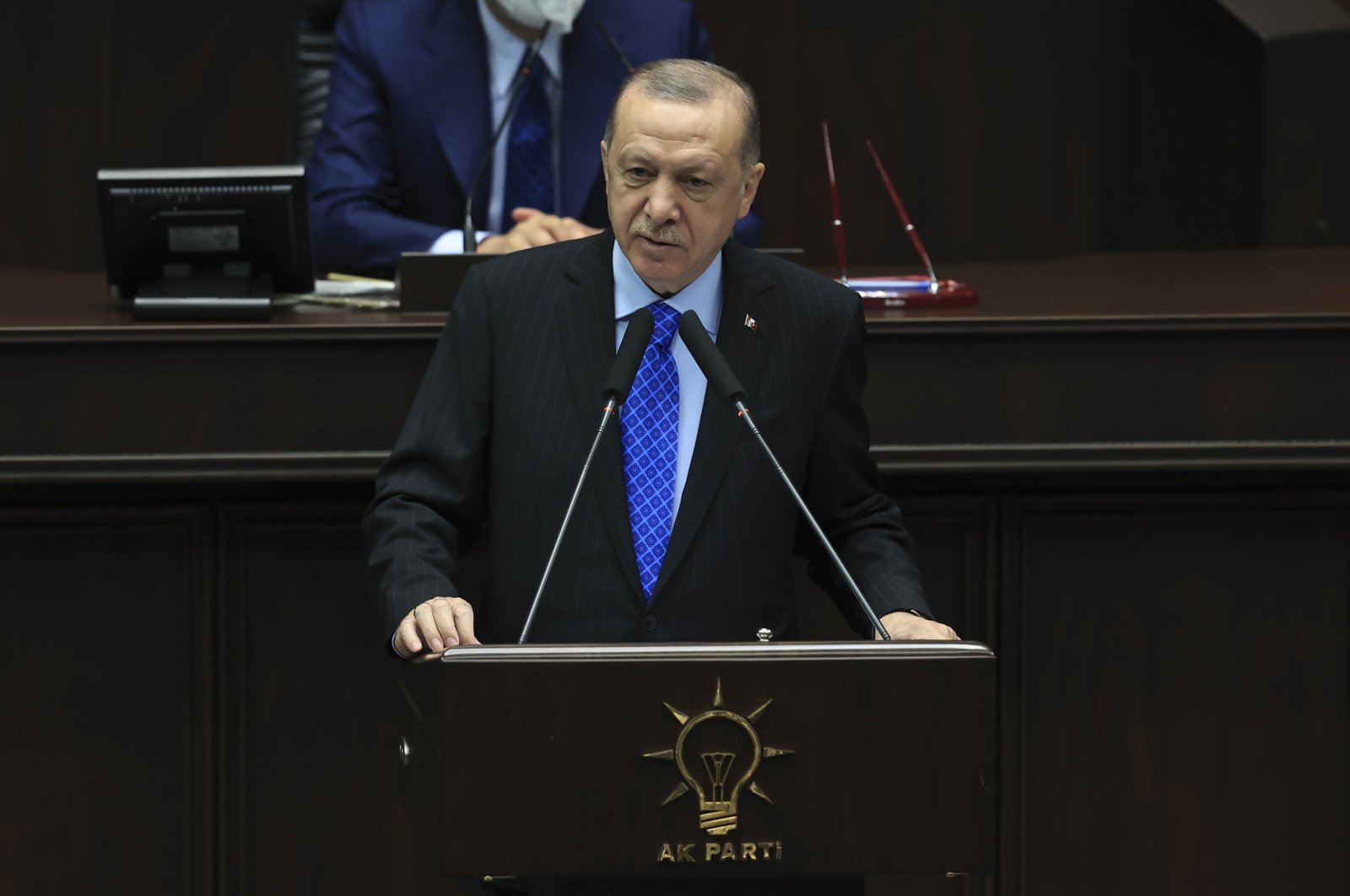 President Recep Tayyip Erdoğan on Wednesday pledged to fight organized crime syndicates, adamant that he would not let mob bosses threaten the atmosphere of peace and security in the country.

Speaking at the ruling Justice and Development Party's (AK Party) parliamentary group meeting in Ankara, Erdoğan expressed solidarity with Interior Minister Süleyman Soylu, as he said the recent attacks he has been facing directly target security in the country.

"Turkey will thwart these plots and will bring organized crime bosses to Turkey to face justice," the president said, in reference to a series of statements made by fugitive mob boss Sedat Peker, who has been releasing a series of videos in which he speaks about his organization and makes allegations about Turkish officials.

Erdoğan continued by saying that the fact that Peker also targeted former Prime Minister Binali Yıldırım's son also indicates that he is disturbed about the atmosphere of peace in the country.

"We are following all criminals wherever they go in the world," he said, adding that the Turkish judiciary will investigate all the "lies and slander" and will make its findings public.

Soylu filed an additional criminal complaint with the Office of the Chief Public Prosecutor, demanding Peker be charged with "insulting and slander" for his comments made about the interior minister.

Turkish police detained Peker's brother on Sunday after Peker said he sent him on a failed mission to kill a Turkish Cypriot journalist 25 years ago on the orders of a former Turkish minister.

Organized crime police detained Atilla Peker and a personal guard at a rented house in the Aegean province of Muğla, broadcaster NTV said.

Peker, 49, rose to prominence in the 1990s as an underworld figure. He fled from Romania to Turkey in 1998 when two men, who were allegedly members of his gang, were convicted of murder. He was arrested in Turkey in late 1998 but released in 1999. He was once again sentenced for mob-related crimes in 2007.

He initially fled to Montenegro but ended up traveling back and forth between Kosovo, North Macedonia and Montenegro. He then fled to Dubai in the United Arab Emirates (UAE), as the country does not have an extradition treaty with Ankara.

"We will present the fourth judicial reform package, which will aim to facilitate citizens’ work, to the Turkish Parliament soon," he said, noting that the package will also boost assurances in criminal procedures.

The fourth package will include some "very important" innovations to help the public deal with the administrative judiciary and to enhance guarantees in criminal proceedings, he said.

The party will then immediately start working on the fifth reform package, according to the president.

Erdoğan declared last November that his administration would enact sweeping reforms in the economy and judiciary with new steps to raise the standards of democratic rights and freedoms. Also, the president had called 2021 the “year of reforms” and pledged that his party would bring about many reforms in the justice and economy fields.

Previously, the AK Party introduced three judicial reform packages, which contained a host of changes, including laws covering freedom of expression, passports and the protection of children.

Two years ago, Turkey kicked off a series of reforms in its legal system in an attempt to enhance democracy in the country while promoting human rights and liberties. Recently, one of the most crucial steps in the process was taken as Erdoğan announced the Human Rights Action Plan. Turkey earlier this year announced its new action plan on human rights, which has 11 main principles set to be carried out over the course of two years.

While announcing the plan, Erdoğan had highlighted one topic heavily: "The ultimate aim of Turkey's action plan is a new civilian constitution."

On continuing efforts to draw up a new constitution to replace Turkey's coup-era charter, Erdoğan said Wednesday: "A new constitution will come out of the nation's conscience and views, and it will be the most valuable legacy that we will leave to future generations."

Erdoğan on Feb. 1 had announced: "It is time for Turkey to discuss a new constitution again." Talk of a new Constitution came amid the government's new democratic reform initiative. The president wants Turkey to have a civilian-drafted constitution by 2023, coinciding with the centenary of the foundation of the Republic of Turkey.

Also touching upon the speculations voiced by opposition parties about early elections, Erdoğan once again reiterated that the elections will take place as planned in 2023.

For months, Erdoğan and AK Party officials have dismissed the possibility of holding early elections, reiterating once again that such claims are nothing but speculation.

Most recently, the AK Party earlier this month ruled out speculations about an early election and said that the polls will be held as planned in June 2023.