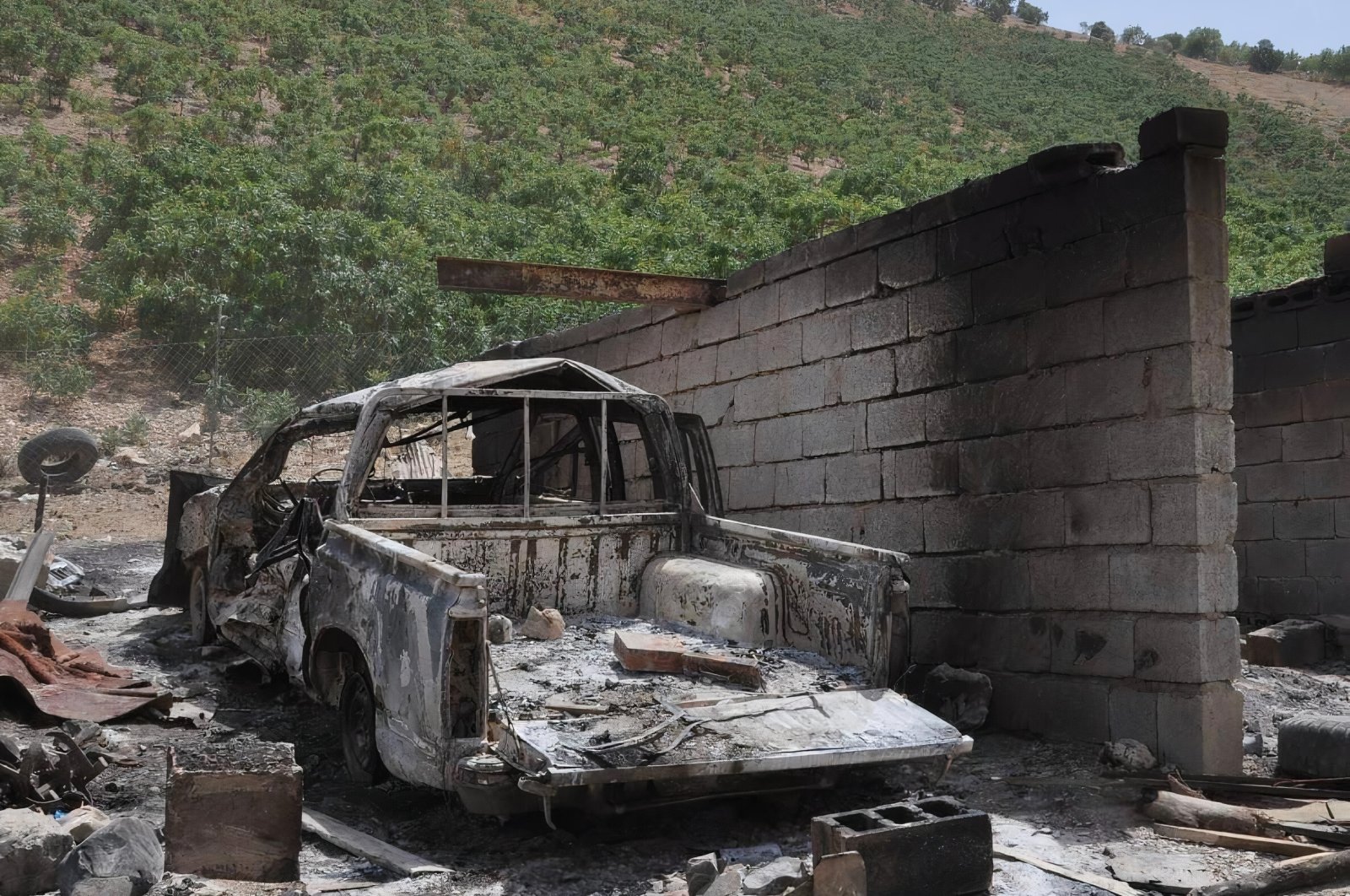 Remains of a vehicle are seen in Sulaymaniyah, northern Iraq, after PKK terrorists Mahiye Açık and Roha Racı were killed in a Turkish intelligence operation in this undated photo released on June 30, 2021. (AA Photo)
by DAILY SABAH
Jun 30, 2021 12:33 pm

Turkish security forces killed two senior-level PKK terrorists in an operation coordinated by the National Intelligence Agency (MIT) in northern Iraq, security sources said Wednesday, as the dissolution of the terrorist group continues at a fast pace amid ongoing efforts.

According to sources, the PKK terrorists, identified as Mahiye Açık and Syrian national Roha Racı, who joined the terrorist group in 2014 and 2015 respectively, were killed in the Sharbazar district in Sulaymaniyah, northern Iraq near the border with Iran.

Photos released by the sources showed the remnants of a destroyed pickup truck targeted by the MIT.

The terrorists were planning to send high-level terrorists from Sulaymaniyah to the south of Qandil, where the terrorist headquarters are located. They had also been attempting to establish cells to enhance communication with local collaborators and to collect intelligence around the Mount Assos area.

The intelligence units also found out that the terrorists had also been searching for safe ways to smuggle and shelter terrorist leaders from the Qandil, Gara and Metina regions, where Turkish forces are carrying out counterterrorism operations.

Recently, a terrorist named Hasan Adır, who was allegedly the senior figure responsible for the Sulaymaniyah area in northern Iraq, was also killed in an MIT operation in the area.

Earlier this month, the PKK terrorist group’s so-called Makhmour regional leader in northern Iraq code-named “Doctor Hüseyin” was eliminated in a joint operation by the MIT.

PKK terrorists have been using civilians as human shields in areas targeted by the Turkish military in counterterrorism operations in northern Iraq.

The PKK’s so-called Patriotic Free Youth and Women’s Movement has recently urged civilians in northern Iraq to join them and those that do are brought to the Zap area – where the Turkish military is targeting the terrorists – to act as human shields, a report said.

The terrorist group has also increased multifaceted terrorist attacks by targeting legitimate representatives of the Kurdish people in northern Iraq, including Peshmerga forces and police officers, kidnapping civilians, targeting diplomatic missions and inciting peaceful protests to violence in the KRG.

PKK terrorists are being heavily targeted in the Metina, Avashin-Basyan, Zap and Qandil regions in northern Iraq. In addition to F-16 fighter jets, the operations are being supported by border artillery units, fire support elements in forward base areas and attack helicopters.

The relentless pursuit of the Turkish Armed Forces (TSK), the General Directorate of Security, the Gendarmerie General Command and the MIT against terrorist organizations trying to disturb the peace in the country continues with the support of the security guards.

The security forces, day and night, in city centers and rural areas, domestically and abroad continued their operations by staying in the field for weeks despite adverse weather conditions and dealt a heavy blow to the PKK terrorist organization. According to the information compiled by the Anadolu Agency (AA), 382 terrorists were killed in air and ground operations in the country and abroad between Jan. 1 and March 31. During this period, 224 of the 815 suspects were detained.

According to Interior Ministry figures, over 51 terrorists surrendered to Turkish security forces in the first four months of 2021, and more of them continue to lay down their arms.

According to some former recruits, PKK ringleaders risk the lives of others to save their own and threaten those planning to surrender with torture. Turkish security forces regularly conduct counterterrorism operations in the eastern and southeastern provinces of Turkey where the PKK has attempted to establish a strong presence.