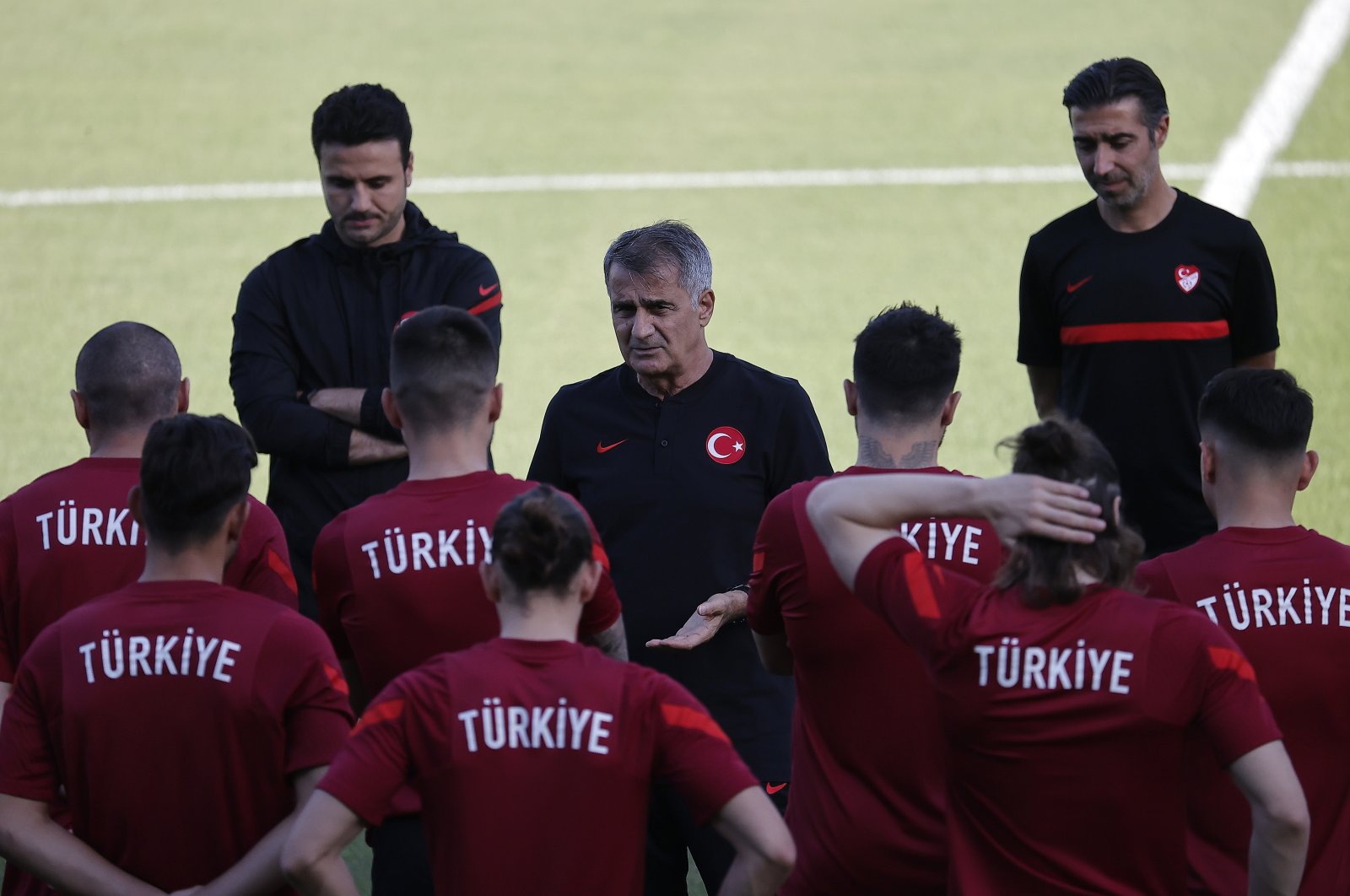 Coach Şenol Güneş (C) speaks with players during a training session ahead of the Euro 2020 Group A game against Switzerland at the Bakcell Arena in Baku, Azerbaijan, June 19, 2021. (AA Photo)
by Agencies Jun 19, 2021 8:48 pm
RECOMMENDED

Turkey needs an improved performance against Switzerland in its last Group A match along with a miracle to reach the knockout stage in Euro 2020, coach Şenol Güneş said Saturday.

Turkey sits at the bottom of Group A, without a point or a goal after defeats against Italy in Rome and Wales in Baku.

The Turkish team takes on Switzerland on Sunday in the Azerbaijani capital knowing they need to win to keep their slim chances of booking a place in the last 16 alive.

"We are in a situation where we need a miracle to happen," Güneş said.

"It will be very sad to go home from this tournament without any success. After the first game against Italy, it felt like it was the end of the world."

Center-back Çağlar Söyüncü said the most disappointing aspect of the opening losses, the second consecutive European Championship where Turkey started with two defeats, was the defense.

"I'm sorry for the result. We want to close the chapter with three points," the Leicester City defender said.

"We are all sad, tomorrow is a completely new game. We are really sad to have conceded five goals in two games."

Güneş took over in March 2019 and oversaw victories over World Cup holders France and Euro 2016 quarter-finalists Iceland during the qualifying campaign, losing just once.

The 69-year-old said he is likely to make alterations to his starting line-up from Wednesday's loss to Wales in Azerbaijan. Left-back Umut Meraş will miss the match with Switzerland and could be replaced by Sassuolo's Mert Müldür. The likes of AC Milan's Hakan Çalhanoğlu and Fenerbahçe's Ozan Tufan could lose their spots in the team.

"There can be changes. We are below our standard. We still have expectations," Güneş said.

"Umut is not playing tomorrow. We might have a change in midfield."

Güneş said his team had not met expectations but Turkey still had young players who would form the backbone of the national side for a decade.

"To our young team, the defeat against Italy in our opening game, it felt like the end of the world," Güneş said.

"However, it doesn't matter we had bad results in this tournament because these young men are the future of this country."

Meanwhile, Switzerland coach Vladimir Petkovic apologized to the country in an open letter published in Saturday's edition of the newspaper Schweize am Wochenende after Wednesday's 3-0 hammering to Italy.

"Soccer players and coaches have feelings, worries, fears and happiness like anyone else. We are just as vulnerable,” Petkovic wrote in his letter. "And that's why we need the support of you all ahead of this decisive game. Your solidarity. Your positivity. We will do everything so that we can all celebrate together on Sunday evening.”

Petkovic's men also need three points to have a chance of claiming a place in the next round.

"The game has a great importance. It's a knock-out game basically," Petkovic said.

"We go home or continue playing, there is no other option."

The Swiss haven't scored much either, netting only one goal in their two matches. Since the loss to Italy, many have turned on Petkovic for what they see as negative tactics and a lack of creativity.

Petkovic has been in charge since 2014, making him the third longest-serving coach at Euro 2020, and is heading into his 76th game. He had never lost a group game at a major tournament before being beaten by Italy.

Before the group stage, Switzerland had been hoping to end its run of three consecutive exits in the round of 16 at major tournaments. Now even reaching that stage would be an achievement.

Goalkeeper Yann Sommer returned to the set-up Friday, having returned to Germany for the birth of his second child after the loss to the Azzurri.

"It was a big switch between me as a footballer and me as a family man," the 32-year-old said.

"After the game I was very disappointed with the result and our performance. But then I was very euphoric when I arrived and hugged my baby.

"Ever since I came back, we talked about things, what we have to improve, because we're not happy with ourselves."

With both teams in a must-win situation, Switzerland's game against Turkey on Sunday might just turn into a festival of attacking soccer. A draw is of no use to either as they try to advance to the round of 16.

And the bigger the margin of victory, the better.

A win would give Switzerland four points in Group A and a good chance of qualifying as one of the four best third-place teams – or even overhauling second-placed Wales. However, a goal difference of minus 3 is dragging the Swiss down. Depending on results in other groups, a one-goal win over Turkey might not be enough.

Just like against Wales on Wednesday, the match on Sunday will feel like a Turkey home game with traveling fans and many locals in Azerbaijan backing the team.