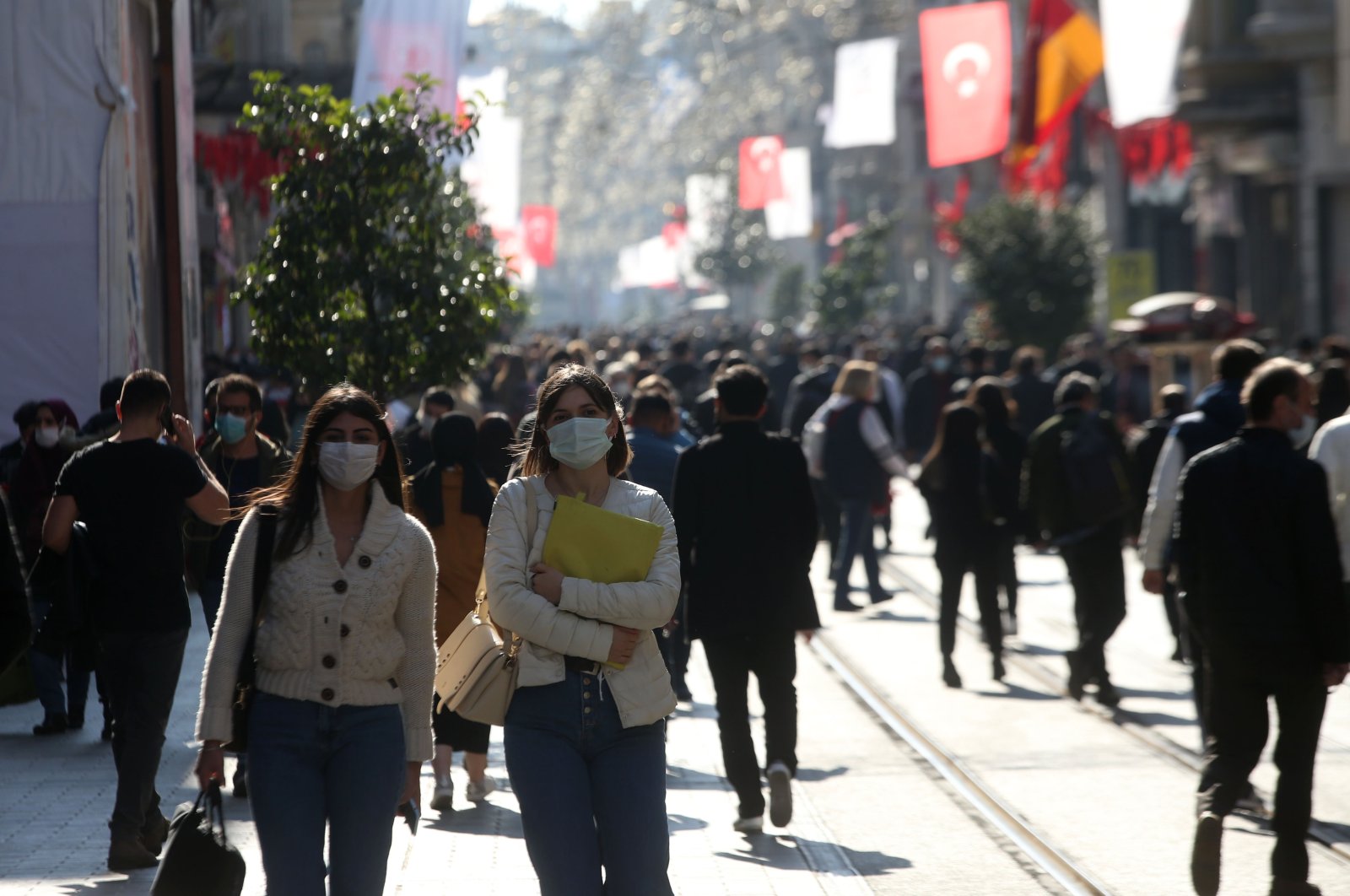 The coronavirus risk continues to prevail, the latest weekly province figures show. Although the color-coded levels did not change much for provinces with high rates of infection, big cities saw a concerning rise in their numbers

A weekly map showing the coronavirus infection risk for each of the 81 provinces was released late Monday by the Health Ministry. The map, which assesses the risk with the average number of cases per 100,000 people, shows a rise in cases with provinces already branded risky.

Health Minister Fahrettin Koca shared the map for March 6-12 on his social media account and warned that a “normalization” could only be possible if measures are followed.

The number of cases per 100,000 people was 178 in the metropolis Istanbul, 68 in the capital Ankara and 78 in the western Izmir province.

In Istanbul, weekly cases increased 60% compared to the previous week, while the rise was 25% for Ankara and 18% in Izmir, the nation's third-largest province. As of Tuesday, only nine provinces had the “blue” status, which means low risk, while 25 provinces are “red,” or at very high risk. The majority of very high-risk provinces are in the Black Sea and Marmara regions. The latter includes Istanbul and other industrial and commercial hubs in the country. Twenty-one among 30 big cities were in either the high or very high-risk groups.

According to the data, the Black Sea province of Samsun had the highest number of cases with 458 per 100,000 people. The southeastern Batman, Şırnak, Siirt, Şanlıurfa and Hakkari provinces had the lowest COVID-19 infections per 100,000 people. As of Monday, Turkey confirmed more than 2.89 million cases, 29,552 fatalities and over 2.71 million recoveries.

Trabzon, which once dominated the list of provinces with the highest risk, is still at risk, though other provinces in the Black Sea region now outpace it. Health care officials say the number of cases started decreasing, thanks to momentum in the vaccination drive.

“We still have up to 250 cases some days but number of those hospitalized due to virus is very low,” Professor Süleyman Türedi, chief physician at Kanuni Training and Research Hospital in the province says. Vacant intensive care beds are a sign of the decline.

Türedi said the province was one of the first places with coronavirus cases in the country and has been at the risk due to its location at the heart of the Black Sea region as a busy transportation hub. He said the province managed to stave off the second wave of the outbreak last year. “I don’t think the numbers are not at a worrying level now. Daily cases may be high but fewer people are hospitalized,” he told Anadolu Agency (AA) on Tuesday. Dr. Gonca Armutçu, who works at the hospital’s intensive care unit, said they have “finally” seen a vacancy in beds and it was a relief for health care workers after one year of struggle against the outbreak in the province. “Beds here used to be rarely empty. We didn’t have time for a break. Vaccination helped to decrease the number. Trabzon has fared well, especially in the vaccination of senior citizens, and this is evident in the drop in hospitalizations,” she said.

Nevertheless, the risk may linger for the region, especially with an expected “migration” in May for tea harvest. Rize, the “tea capital” of Turkey, which currently has an average of 188 cases per 100,000 people, is under particular risk, experts warn. Professor Faruk Aydın, head of the microbiology department at Karadeniz Technical University (KTÜ) in Trabzon, said thousands of people, from tea orchard owners to seasonal laborers, would descend on Rize and other provinces in the eastern Black Sea region. “We have to do more to curb the number of infections before May,” he said. Rize, Trabzon, Artvin and Giresun are home to thousands of acres of tea orchards that provide a livelihood for more than 1 million people. Most owners are migrants who live in the big cities in the west, who return to their hometowns for the harvest in May. “This is a season when the region will need more workers who usually come from other provinces and even abroad. It can be a real challenge even if they are not infected when they arrived here. If we cannot curb the infection rate in the region, they will likely be carriers when they leave and spread the virus to other regions in the country,” he told Demirören News Agency (DHA).

Siirt, a southeastern province, surpassed its neighbors Hakkari and Şırnak in the past week becoming the place with the lowest number of cases, around two per 100,000. It is an impressive feat for the province with a population of more than 330,000 people. “We complied with measures and did it,” Ömer Özer, a local, told DHA on Tuesday. Selahattin Vural, the chief physician at a hospital in the province, said it was the result of health care workers’ efforts combined with public awareness. “We only have eight coronavirus patients in our hospital now,” Vural said, adding only two of them were in intensive care.

Turkey counts on mass vaccinations as one of its surefire ways to overcome the outbreak. President Recep Tayyip Erdoğan said Monday after a Cabinet meeting that the country was fifth in the world in vaccinations. Erdoğan also said the normalization process would continue for a while, with no plans for a major lockdown for now.

The country currently uses CoronaVac, an inactive vaccine developed by China’s Sinovac, for vaccination and as of Tuesday, administered more than 11.8 million doses. Media reports say it will obtain 4.5 million doses of the Pfizer-BioNtech vaccine and the first shipment, of 850,000 doses, are set to be delivered by the end of March. The messenger RNA (Mrna) vaccine, will be available upon request. Reports also say that the AstraZeneca vaccine, which faced suspensions and bans in a number of countries due to reported serious side effects, will not be acquired by Turkey.