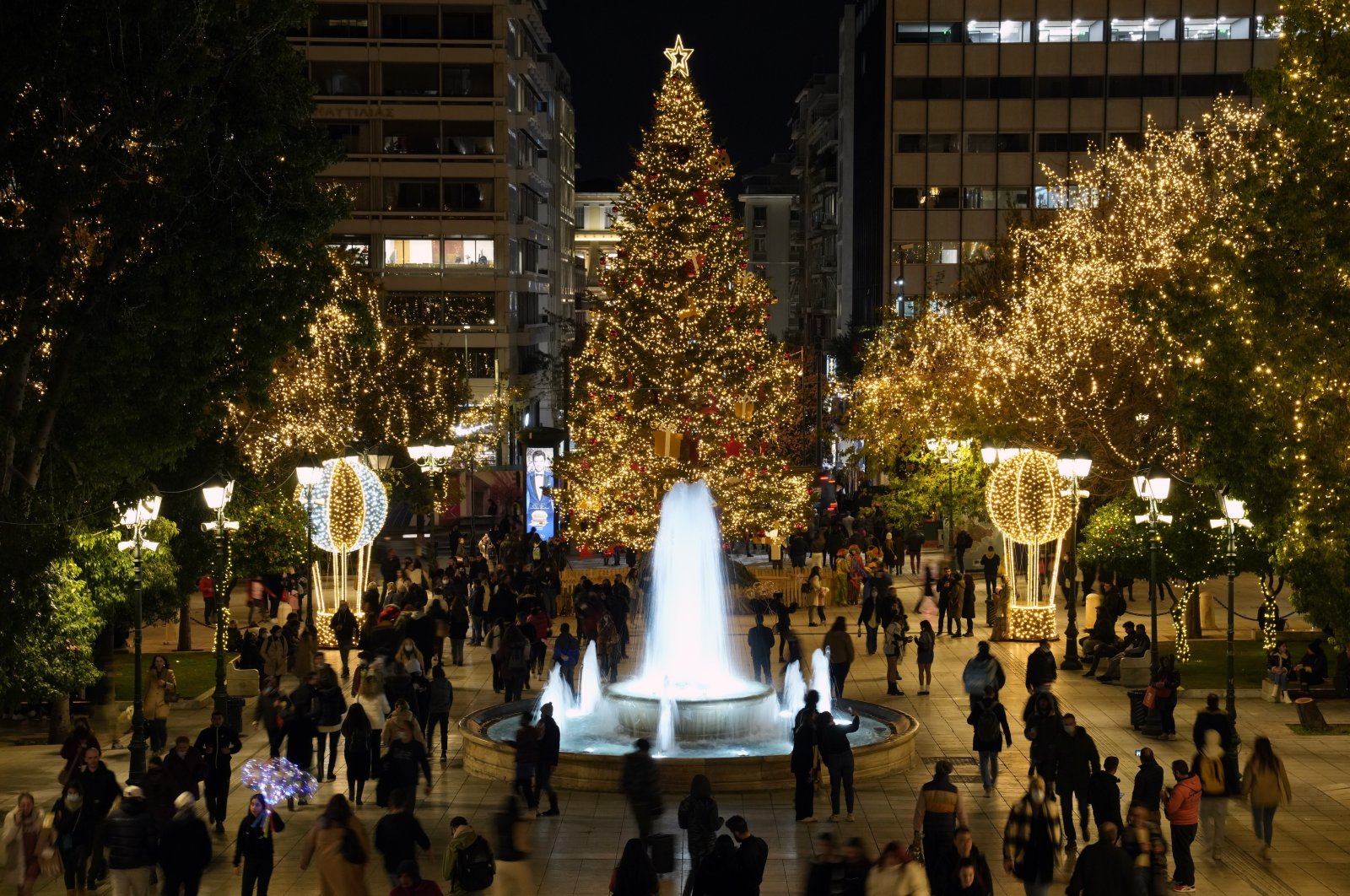 European states along with the U.S. stepped up restrictions to slow the startling spread of the omicron coronavirus variant with hopes for the Christmas and new year holiday season dashed once again

People again queue up outside COVID-19 testing centers with lines stretching around the blocks. Refrigerated mobile morgues are on order, and parts of Europe are retightening borders amid a winter spike in coronavirus infections.

This year's holiday season was supposed to be a do-over of last year's subdued celebrations. Instead it's turning into a redux of restrictions, cancellations and rising angst over the never-ending pandemic.

As Christmas and New Year's approach, a pall lingers over the season. Infections are soaring around the world, and the quickly spreading omicron variant has triggered new restrictions on travel and public gatherings, reminiscent of the dark days of 2020.

The accelerating cancellations seem "to have thrown us back into that sort of zombie world of the first week of March of the pandemic last year,” said Jonathan Neame, the chief executive of Shepherd Neame, Britain’s oldest brewery and chain of pubs.

New York Mayor Bill de Blasio said Thursday that the city would "watch very carefully” whether to press ahead with plans to welcome a fully vaccinated revelers back to Times Square on New Year’s Eve, a celebration that was canceled last year. It’s a go for now, the mayor said.

Multiple Broadway shows, including "Hamilton,” "Mrs. Doubtfire” and "Harry Potter and the Cursed Child,” called off performances in recent days because of the virus cases in their all-vaccinated casts and crews. California and New York brought back indoor mask mandates.

In Philadelphia, Health Commissioner Cheryl Bettigole urged residents not to go to indoor holiday parties, calling them "just too dangerous.” She ruefully advised against even getting together with other households for Christmas.

Many Americans have spent nearly two years on an emotional seesaw as the pandemic worsened and waned in cycles and the hoped-for return to normal was repeatedly pushed back. A recent poll by MTV Entertainment Group and The Associated Press-NORC Center for Public Affairs Research (AP-NORC) found that nearly half of American adults said the pandemic made it harder to maintain their mental health.

"I think for a large number of people, there was this hopefulness that this holiday season was going to be different. So if you went in with that expectation, and you weren’t adjusting it over the last couple of months, I think you’re going to be all the more disappointed,” said Dr. Vaile Wright, a clinical psychologist who works for the American Psychological Association (APA). According to The Associated Press (AP), her advice "try to get to a place where the expectation is that this is going to continue on for a while, and if you’re feeling stuck, try to find ways to make your life meaningful right now.”

The world has been on edge over the omicron variant, which could become the dominant strain of coronavirus in weeks in many nations. Adding to that anxiety is the fact that hospitals in many U.S. states are already slammed with patients infected with the delta variant. The military and the National Guard have been enlisted to help at hospitals.

Refrigerated mobile morgues, a grim symbol of the early pandemic, are making a comeback. In Arizona, one county voted this week to spend $65,000 on a mobile morgue because virus deaths have far exceeded capacity. A hospital in Akron, Ohio, brought in a trailer to more than triple its morgue space, Cleveland television station WKYC reported. Some people are striving to keep fears in check.

Dakota LeRoy, a 25-year-old product designer in Manhattan who is fully vaccinated, had reasoned that it would be safe to go to a Christmas-themed dive bar to celebrate a new job last week. But on Wednesday, she found she was infected with COVID-19 after a scratchy throat and some sniffles prompted her to get tested before a holiday visit with her boyfriend’s family in Boston.

"Everyone I know is either positive or has been in direct contact with somebody who is,” she said.

April Burns, a bill collector for New York City, said things are far from being back to normal. But she considers the worst to be over.

"Last year, everybody was shut down. At least now, things are open, you know. You can get out more, and you still get to see people,” said Burns, who is unvaccinated and was standing in line Thursday near Wall Street to comply with city rules that require her to be tested weekly.

On Thursday, U.S. President Joe Biden warned of a "winter of severe illness and death" for those unvaccinated against COVID-19, as the G-7 called the omicron variant the biggest threat to global public health.

The stark words came as Britain saw more than 88,000 COVID-19 infections, a second consecutive record daily number, prompting France to impose "drastic" new limits on travel to the U.K. Scientists remain uncertain how dangerous the highly mutated Omicron variant is, but early data suggests it can be more resistant to vaccines and is more transmissible than the Delta variant.

The World Health Organization (WHO) said earlier this week that the strain has been reported in 77 countries and has "probably" spread to most nations undetected at a higher rate than any previous variant of the virus. Countries worldwide have begun advising against foreign travel while ramping up domestic restrictions to battle omicron and bolstering vaccination efforts.

The G-7 on Thursday called the variant the "biggest current threat to global public health," saying its emergence meant it was "more important than ever" for countries to closely cooperate and share data. In a meeting hosted by group chair Britain, the countries' health ministers emphasized the "increasing importance of booster campaigns and regular testing", according to Agence France-Presse (AFP).

Biden's warning about the winter came as he urged Americans who have already had two shots to get boosters and vaccine skeptics to step up and get jabbed.

"The only real protection is to get your shot," he said, with the White House saying the administration did not intend to take specific restrictive measures but would instead focus on vaccination.

The U.S., the hardest-hit country in the world, is currently averaging 1,150 COVID-19 deaths per day, according to figures from the Centers for Disease Control and Prevention (CDC). In the first two weeks of December, the average daily cases of infection spiked in the U.S. by 35%.

However, across the Atlantic, the magnitude of the threat was being felt strongest, even as Britain stopped short of imposing formal limits on socializing as the government awaited further evidence of the severity of the omicron variant.

Last year, Christmas celebrations were drastically curtailed after the alpha variant swept the country. Britons had hoped that this year would be different, but cases have again shot up to record levels. There are now fears the variant could overwhelm hospitals during the festive season, and many Britons are scrambling to change their plans.

Queen Elizabeth II canceled her traditional pre-Christmas family lunch next week as a precautionary measure, despite Prime Minister Boris Johnson saying such gatherings could still go ahead. The Premier League on Thursday postponed six more football matches, though it said it intended to "continue its current fixture schedule where safely possible."

With case levels exploding in Britain, France on Thursday banned all nonessential travel to and from the U.K. From 11:00 p.m. GMT Friday, travelers will need "an essential reason to travel to, or come from, the U.K., both for the unvaccinated and vaccinated ... People cannot travel for touristic or professional reasons."

Several countries, including Italy, Ireland, Portugal and Greece, have already announced they will impose pre-arrival COVID-19 tests on all EU arrivals.

That undermined an EU COVID-19 certificate that had previously exempted vaccinated travelers from such tests. The European Commission said that Italy had not given the requisite 48-hour notification before bringing in its added restriction. One mooted plan is to make the COVID-19 certificate expire after nine months if a booster has not been added.

"This could hopefully ... help to move back to a more coordinated situation and policy," said Dutch Prime Minister Mark Rutte.

"But," he added, "at the core is an understanding that member states have to take measures when their national health issues demand them."

French President Emmanuel Macron said that extra tests at intra-European borders would have a "very reduced effectiveness" since most travelers are exempted from the rules anyway.

"From the moment when such and such a variant is present in a country of the EU, it spreads to the others," he said.

This, however did not stop France from announcing a ban on tourist travel from Britain, and tighter testing requirements for French and EU citizens or those with compelling reasons, who are still allowed in.