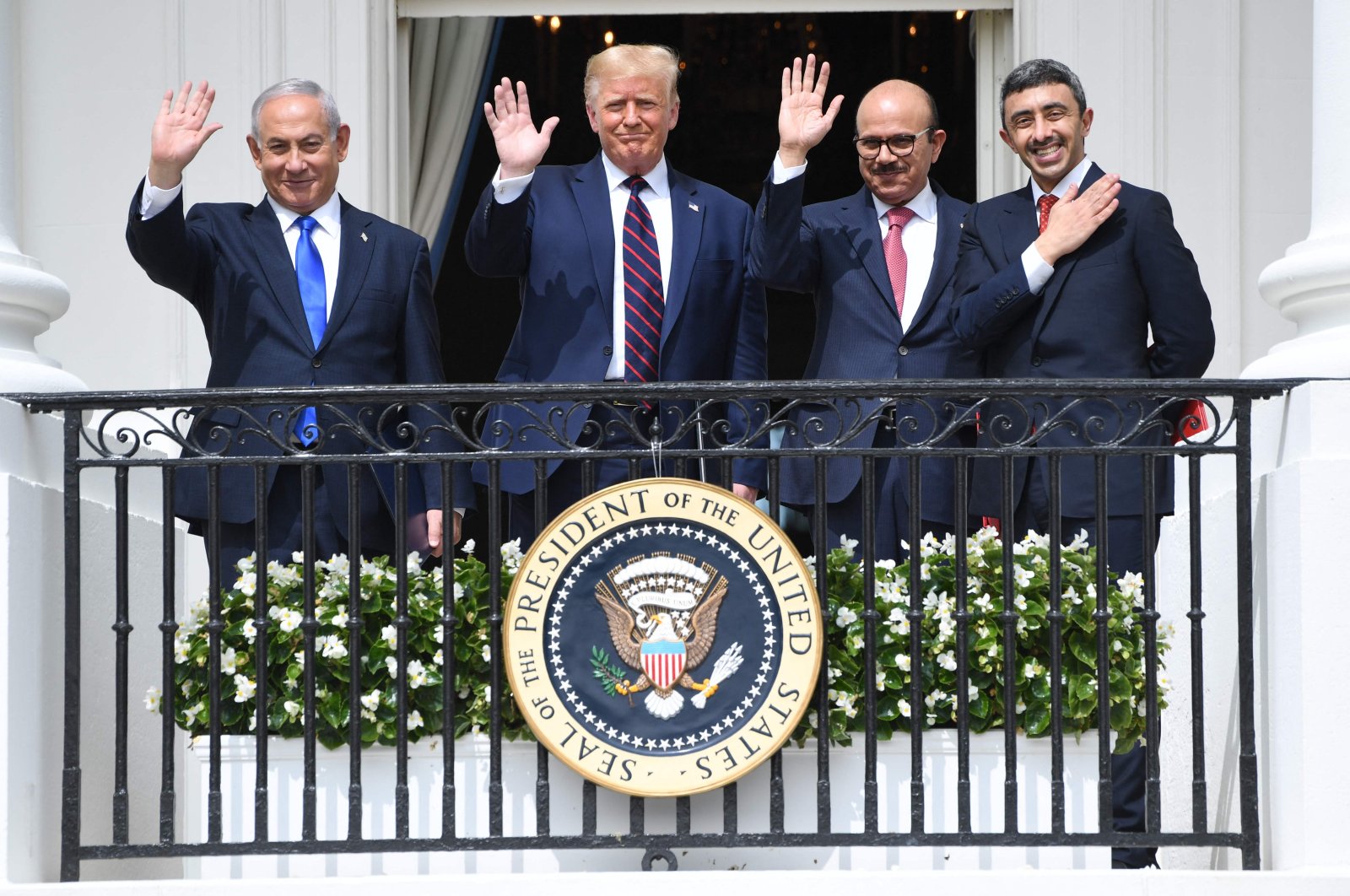 One year after the United Arab Emirates and Israel signed the U.S.-brokered Abraham Accords, causing a rift between Palestinians and Arab nations who joined Abu Dhabi, the signatory countries eye nearly a trillion dollars in economic activities, while Palestinians simply want liberation

The United Arab Emirates (UAE) Wednesday marked one year since it normalized ties with Israel, a move that drew Palestinian anger and further promoted the colonization agenda inside the Knesset, but one that leaders hope could reap a trillion dollars in economic exchanges.

Watched by then United States President Donald Trump, the UAE and Gulf neighbor Bahrain formally recognized Israel on Sept. 15, 2020, in Washington, prompting Palestinian accusations of a "stab in the back."

The surprise step, under the U.S.-brokered Abraham Accords, broke with decades of Arab consensus that ruled out formal ties while the Palestinian conflict was unresolved. It marked a thaw in the region, with Morocco and Sudan soon following suit and regional power Saudi Arabia, the world's top oil producer, allowing some overflights from Israel.

The economic benefits have come quickly for the UAE and Israel, who signed a series of deals ranging from tourism to aviation and financial services. Israeli Foreign Minister Yair Lapid made a landmark visit to the UAE in July, opening an embassy in Abu Dhabi and a consulate in Dubai, while the UAE established an embassy in Tel Aviv.

"After a year of the Abraham Accords, we have a story to say," UAE Minister of Economy Abdulla bin Touq Al Marri told a panel discussion by the Atlantic Council, a U.S. think-tank, on Monday.

"We exchanged ambassadors, we have signed over 60 MOUs (memorandums of understanding). We have 600-700 million in bilateral trade happening, we have funds of billions of dollars that have been announced. We're looking to create over a trillion dollars of economic activity over the next decade," he explained.

Further benefits will come if a major deal to ship Emirati oil to Europe via an Israeli pipeline clears objections from environmentalists, who fear damage to unique coral reefs in the Red Sea. Beyond economics, the rapprochement was also pushed by mutual concern over Iran, with the regional rivalry even pushing Riyadh into quietly building relations with Israel over the past several years.

Online criticism of Israel is frequent in both the UAE and Bahrain, but open dissent over the normalization is rare, likely to avoid angering authorities. Even when Israeli airstrikes leveled buildings during an 11-day conflict with Hamas in May, triggering an upswell of outrage, the relationship continued unhindered.

"All the Arab world was a bit preoccupied with what was happening in Gaza and with the pictures coming out," Ilan Sztulman Starosta, head of the Israeli Consulate in Dubai, told Agence France-Presse (AFP) in an interview. "But still they didn't change the policy because the peace with Israel is a national interest for the Emirati government and the same from the Israeli government," he said.

"For us, it's really strategic," he added.

Sztulman Starosta said about 200,000 Israelis had visited the UAE over the past year, despite COVID-19, and an estimated 40 companies from his country had set up in the Gulf state's free-trade zones.

The Emirates now has its first students enrolled in Israeli universities, added Sztulman Starosta, who is hoping the Abraham Accords can inspire further ties around the region.

"If we can make it work here, we can make it everywhere," he said. "If we managed to make this peace work, and it is working, for the better of Israeli and Emirati citizens, then this model can be applied to other countries in the area. And that's how we're going to change the paradigm that Jews and Muslims can live and have normal relations and fruitful and enjoyable (collaborations)," he explained.

While Tel Aviv, alongside its allies, dreamed about a flourishing future for Jews and Muslims, Palestinians woke up to the normalization of Israel's colonization of Palestine. Israel's attempts to create peace between people who live next to each other could not be called successful. Moreover, its arbitrary policies aggravated tensions between occupiers and occupied.

Palestinians say that although the normalization of relations between Israel and the Arab states caused some turmoil, the preliminary normalization of Israel as such at the international level, first through its acceptance as a state and member of the United Nations, and then as a two-state compromise on which the international consensus is based, should never be condemned.

Even as international leaders and the wider community agreed that the creation of two separate states would bring peace, Israeli authorities do not hurry to accept even this plan. On Tuesday, Israeli Prime Minister Naftali Bennett said that he is against the creation of an independent Palestinian state and is not going to hold talks with Palestinian Authority (PA) President Mahmoud Abbas. In an interview with state-owned KAN News, Bennett spoke about developments on Israel’s agenda, saying the establishment of an independent Palestinian state would be "a terrible mistake,” as Anadolu Agency (AA) reported.

He also said that he would not meet with Abbas, who he said is "suing IDF (Israeli Defense Forces) soldiers and commanders at the International Criminal Court (ICC) in The Hague” as well as providing monthly stipends to "terrorists,” referring to Palestinian detainees and relatives of deceased Palestinians. In an interview with the Israeli daily Yedioth Ahronoth, he argued that the whole of Jerusalem was the "capital" of Israel. Palestinians demand the foundation of an independent state with East Jerusalem as its capital. However, the Israeli administration rejects this, saying the entire city is its capital.

Several human rights organizations, as well as activists, have been calling on the international community to condemn abusive policies against the Muslim population in the country and occupied territories. In a June report, prominent human rights group Amnesty International accused Israel and its security forces of "committing a catalog of violations." The report said that the actions of the Israeli police were repressive and discriminatory. The police could not or did not want to protect the Palestinian citizens of Israel from deliberate attacks by supremacy groups, even when the plans were publicized in advance and the police knew or should have known about them.

According to a local nongovernmental organization (NGO), Commission on Detainees and Ex-Detainees Affairs, 1 million Palestinians have been exposed to illegal detention since the 1967 Middle East war. "Around 17,000 women and girls and 50,000 children were among those detained,” it said in a statement in June. The NGO said more than 54,000 administrative detention orders were recorded since 1967. The policy of administrative detention allows Israeli authorities to extend the detention of a prisoner without charge or trial.

"A total of 226 detainees have died inside Israeli prisons since 1967,” it added.

The NGO said all those detained experienced "some form of physical or psychological torture, moral abuse and cruel treatment.” An estimated 4,500 Palestinians are believed to be held in Israeli prisons, including 41 women, 140 minors and 440 administrative detainees, according to data compiled by organizations on the rights of prisoners. During the 1967 Middle East war, Israel occupied the West Bank, East Jerusalem, Syria's Golan Heights and Egypt's Sinai Peninsula, which was later returned to Egypt under the country's 1979 peace deal with Israel.