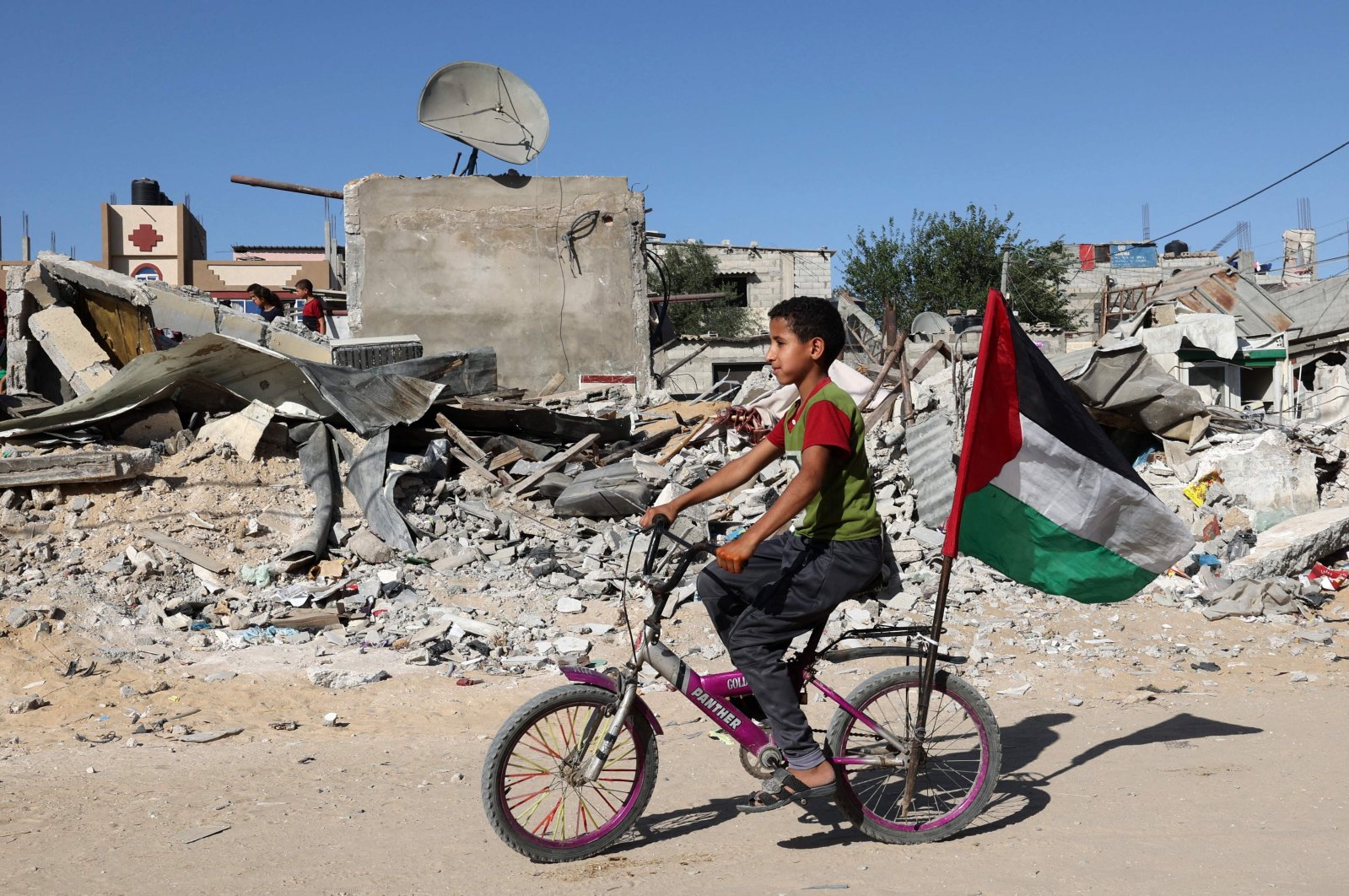 A Palestinian child rides his bicycle in front of the ruins of a building destroyed during recent Israeli bombing in Rafah, in the southern Gaza Strip, Palestine, on May 26, 2021. (AFP Photo)
by ASSOCIATED PRESS May 26, 2021 8:37 pm
RECOMMENDED

Pushing forward on a diplomatic mission to bolster a cease-fire that ended 11 days of conflict between Israel and the Gaza Strip's Hamas resistance group, U.S. Secretary of State Antony Blinken traveled to Egypt and Jordan Wednesday.

Blinken landed in Cairo a day after holding intensive talks with Israeli and Palestinian leaders. In Egypt, he met with President Abdel Fattah el-Sissi and other top officials. Later he traveled to Jordan to meet with King Abdullah II.

Blinken has vowed to “rally international support” to rebuild hard-hit Gaza while promising to make sure that none of the aid reaches Hamas. He is instead trying to bolster Hamas' rival, the internationally recognized Palestinian Authority (PA).

In a boost to those efforts, the energy-rich Gulf country of Qatar pledged $500 million to postwar reconstruction in Gaza. Qatar often serves as a mediator between Israel and Hamas and it has contributed hundreds of millions of dollars in humanitarian and development aid to support past cease-fires.

“We will continue to support our brothers in Palestine in order to reach a just and lasting solution by establishing their independent state,” Qatar's foreign minister, Mohammad bin Abdulrahman Al Thani, wrote on Twitter.

Blinken has set modest goals for the trip, his first official visit to the Middle East as secretary of state. His main goals have been to help rebuild Gaza and lower the tensions in contested Jerusalem that helped fuel the war.

But he has made it made clear the U.S. has no immediate plans to pursue peace talks between the sides and done little to address the underlying causes of the decadeslong conflict, though he expressed hope for creating a “better environment” that might lead to negotiations.

In Cairo, Blinken on Wednesday met with el-Sissi for nearly two hours. Meeting with American diplomatic staff afterwards, he described Egypt as a “real and effective partner” that helped end the Gaza war and is helping “build something positive.” El-Sissi spoke to President Joe Biden last week before and after the cease-fire was announced.

“I think we both believe strongly that Palestinians and Israelis deserve equally to, to live in safety and security to enjoy equal measures of freedom, opportunity and dignity. And we’re working on that together,” Blinken said before departing to Jordan.

El-Sissi issued a statement later saying the latest round of violence showed the urgency of resuming direct negotiations. He called for “active American engagement” to bring Israel and the Palestinians back to the negotiating table.

Both Egypt and Jordan are key U.S. allies that have peace agreements with Israel and frequently serve as mediators between Israel and the Palestinians. Egypt maintains ties with Hamas, but also enforces a tight blockade on Gaza, along with Israel, with a shared goal of preventing the resistance group from arming.

The stop in Cairo, along with Biden’s phone talks with el-Sissi, signal a closer relationship between the countries after a cooler beginning, when the U.S. expressed concern over el-Sissi’s human rights record.

The Gaza reconstruction effort will be an important test. The 11-day war killed more than 250 people, mostly Palestinians, and caused heavy destruction in the impoverished coastal territory. Preliminary estimates have put the damage in the hundreds of millions of dollars.

In Gaza, Hamas leader Yehiyeh Sinwar told journalists Wednesday that the group welcomed international reconstruction aid, as long as it did not come from Israel, and had no objections to international oversight.

"I emphasize our commitment in Hamas that we will not take a single penny earmarked for rebuilding or humanitarian issues,” he said.

Sinwar, who has close ties with the group's armed wing, said Hamas receives ample military assistance from outside sources – led by Israel's archenemy, Iran. “When I said we do not take money destined for aid, this is because we have comfortable sources of funds covering our activities,” he said.

He also lashed out at Blinken for trying to strengthen the Palestinian Authority at Hamas' expense. “They are trying to add more fuel to the fire of Palestinian division,” Sinwar said.

British Foreign Secretary Dominic Raab was in Israel on Wednesday to build on the momentum of Blinken's visit.

Echoing Blinken's message, Raab said the U.K. supported Israel's right to defend itself against Hamas rocket fire and would seek to prevent aid money from reaching Hamas. But he also expressed hope that cease-fire efforts would lead to a broader regional peace effort.

“We want to support Israel but we also want the Palestinians to find a track towards an enduring peace,” he said.

Blinken said Tuesday the U.S. is trying to bolster the rival government of President Mahmoud Abbas, whose forces were ousted from Gaza by Hamas in 2007. Abbas’ Palestinian Authority now administers autonomous areas in the Israeli-occupied West Bank. Abbas has been largely sidelined by recent events, is deeply unpopular at home and has little influence in Gaza.

Abbas hopes to establish an independent state in all of the West Bank, Gaza and East Jerusalem – areas captured by Israel in the 1967 Mideast war.

The truce that ended the Gaza war on Friday has so far held, but it did not address any of the deeper issues plaguing the Israeli-Palestinian conflict. Those challenges include a hawkish Israeli leadership that seems unwilling to make major concessions, Palestinian divisions, years of mistrust and deeply rooted tensions surrounding Jerusalem and its holy sites.

The war was triggered by weeks of clashes in Jerusalem between Israeli police and Palestinian protesters in and around the Al-Aqsa Mosque, built on a hilltop compound revered by Jews and Muslims that has seen several outbreaks of Israeli-Palestinian violence over the years. The protests were directed at Israel’s policing of the area during the Muslim holy month of Ramadan and the threatened eviction of dozens of Palestinian families by Jewish settlers.

The truce remains tenuous since tensions are still high in Jerusalem and the fate of the Palestinian families is not yet resolved.

On Wednesday, an Israeli court heard arguments from a Palestinian family trying to block their eviction in Silwan, another east Jerusalem neighborhood targeted by settler groups.

“The settlers want to take my house, to steal my house with their fake papers,” said Kaet Abdel Fath El Rajabi, who said his family has lived in the building for 60 years. Several dozen protesters stood outside the courthouse in support of the family.

In his remarks after his meeting with Blinken on Tuesday, Netanyahu hardly mentioned the Palestinians, warning of a “very powerful” response if Hamas breaks the cease-fire while expressing support for economic development in the West Bank.

Blinken repeatedly affirmed what he said was Israel’s right to defend itself. But he also called on leaders of all sides to chart a “better course” in hopes of laying the groundwork for peace talks aimed at establishing an independent Palestinian state alongside Israel.