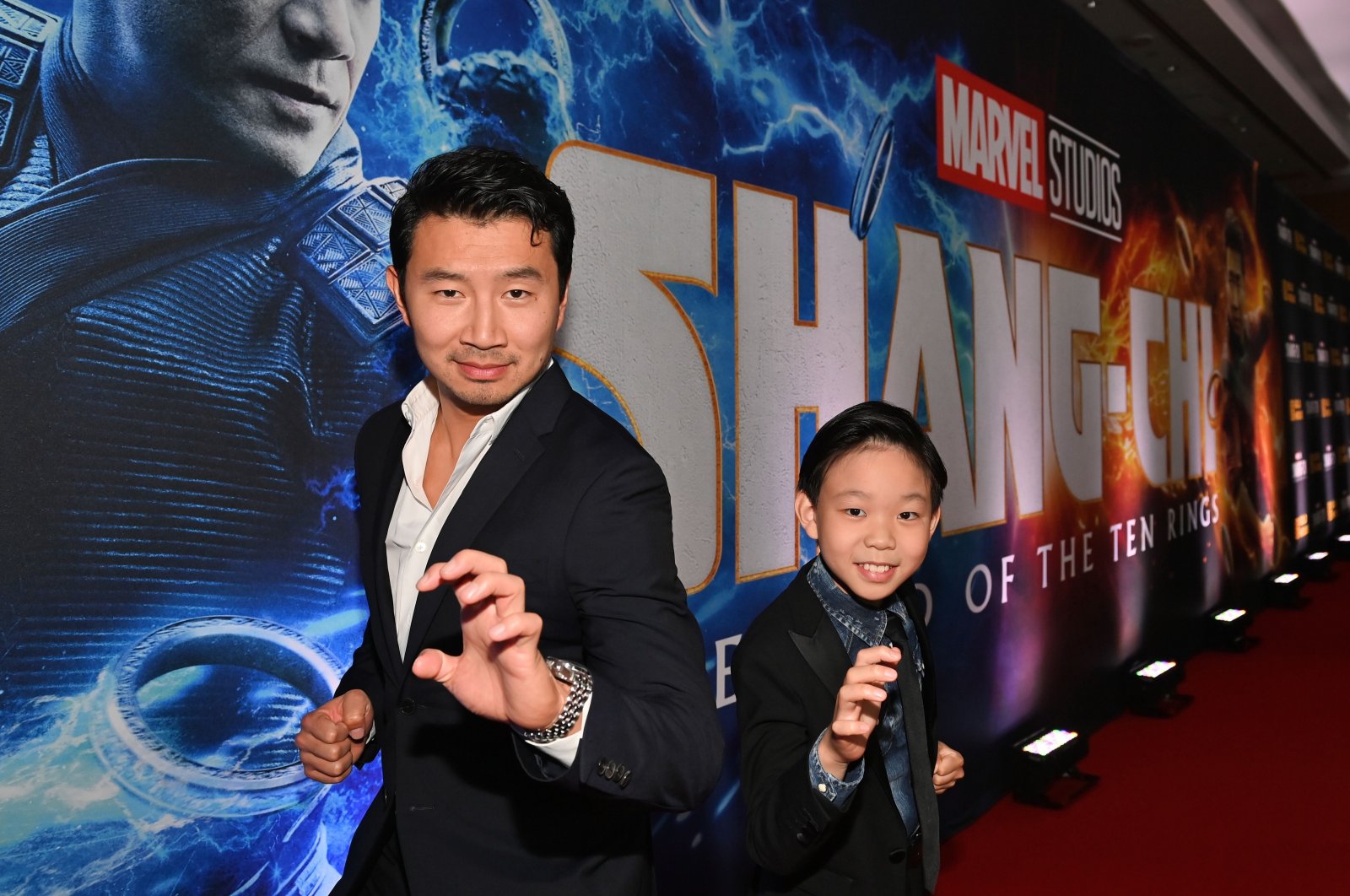 Actors Simu Liu (L) and Jayden Zhang attend the Toronto Premiere of “Shang-Chi and the Legend of the Ten Rings” at Shangri-La Hotel in Toronto, Ontario, Canada, Sept. 1, 2021. (Getty Images)
by Associated Press Sep 06, 2021 11:40 am
RECOMMENDED

Marvel's “Shang-Chi and the Legend of the Ten Rings” was Disney's attempt to jumpstart the pandemic-ridden moviegoing experience that saw success at the box office for the hyped and praised film – and it worked even on what is traditionally one of the sleepiest weekends at the movies. The first Marvel film with an Asian superhero lead smashed the record for Labor Day openings with an unexpectedly strong $71.4 million in ticket sales in North America.

The Friday-to-Sunday gross for "Shang-Chi and the Legend of the Ten Rings," Marvel's first film led by an Asian superhero, ranks as one of the best debuts of the pandemic, trailing only the previous Marvel film, "Black Widow" ($80.3 million in July).

Overseas, it pulled in $56.2 million for a global three-day haul of $127.6 million. Disney anticipates "Shang Chi," made for about $150 million, will add $12.1 million domestically Monday.

The Walt Disney Co. opted to release "Shang-Chi" only in theaters where it will have an exclusive 45-day run. Some of the studio's releases this year, including "Black Widow," have premiered day-and-date in theaters and on Disney+ for $30.

The strong opening of "Shang-Chi" – forecasts had been closer to $50 million – was a major relief for Hollywood, which had seen jittery releases the last few weeks during rising COVID-19 cases driven by the delta variant. Several upcoming films have recently postponed out of the fall, including Paramount Pictures' "Top Gun: Maverick," "Jackass Forever" and "Clifford the Big Red Dog."

Disney's weekend, though, should lend confidence to upcoming big-budget releases such as the James Bond film "No Time to Die" from MGM and United Artists Releasing, and Sony Pictures' "Venom: Let There Be Carnage."

"This was a very important film. This was the first Marvel movie that's opened exclusively theatrically since 'Spider-Man: Far From Home' in July 2019. 'Shang-Chi' is a real testament of the power of a theatrical-first strategy to drive huge numbers of moviegoers to the multiplex," he said.

Perhaps nobody was celebrating Sunday more than theater owners. Exhibitors have argued day-and-date releases significantly cannibalize ticket sales. Warner Bros., which is putting all of its 2021 releases simultaneously on HBO Max, has vowed to end the practice next year.

Adding to that argument is the continuing strong performance of "Free Guy," from Disney's 20th Century Studios. "Free Guy," contractually obligated to be released only in theaters, has grossed $239.2 million globally.

Without an in-home option, the Ryan Reynolds film has held especially strongly; it added $8.7 million in North America over the weekend, good for third place. In China, "Free Guy" has made $57 million in less than two weeks. ("Shang-Chi" doesn't yet have a China release date.)

Still, you could also read a case for streaming in Disney's figures Sunday. "Shang-Chi," the studio noted, premiered roughly similarly to "Black Widow," which debuted with about $160 million globally, but took in an additional $60 million on Disney+ Premier Access. "Black Widow," a much more well-known property, launched before the delta variant was widespread in North America.

Its release prompted a lawsuit from star Scarlett Johansson, who argued the day-and-date approach breached her contract and deprived her of potential earnings. Disney has said the release complied with Johansson's contract and called the suit without merit.

Disney has so far declined to telegraph its future theatrical intentions, including for its next Marvel movie, "Eternals" (due out Nov. 5). Bob Chapek, Disney's chief executive, earlier called the theatrical release of "Shang-Chi" "an interesting experiment" – a label that Canadian actor Simu Liu, who plays Shang-Chi took exception with.

"We are not an experiment," Liu wrote on Twitter. "We are the underdog; the underestimated. We are the ceiling-breakers. We are the celebration of culture and joy that will persevere after an embattled year."

At the recent exhibitor convention CinemaCon, where some studios pledged faith in the big screen, Disney didn't make a presentation and instead simply screened "Shang-Chi."

Directed by Destin Daniel Cretton, the film is based on a relatively little-known comic and features a largely Asian or Asian American cast, including Tony Leung, Awkwafina and Michelle Yeoh. Audiences and critics have heartily endorsed it. It has a 92% fresh score on Rotten Tomatoes and an "A" CinemaScore from moviegoers.

The success of "Shang-Chi and the Legend of the Ten Rings" came on a typically quiet weekend for Hollywood – one that would never normally feature the premiere of a new Marvel movie. The previous record over Labor Day weekend was $30.6 million for 2007's "Halloween." But the pandemic has upended once-orderly release schedules.

"Shang-Chi" drove moviegoing overall not to just radically higher levels than the pandemic-marred Labor Day weekend last year, but far above attendance in 2019.