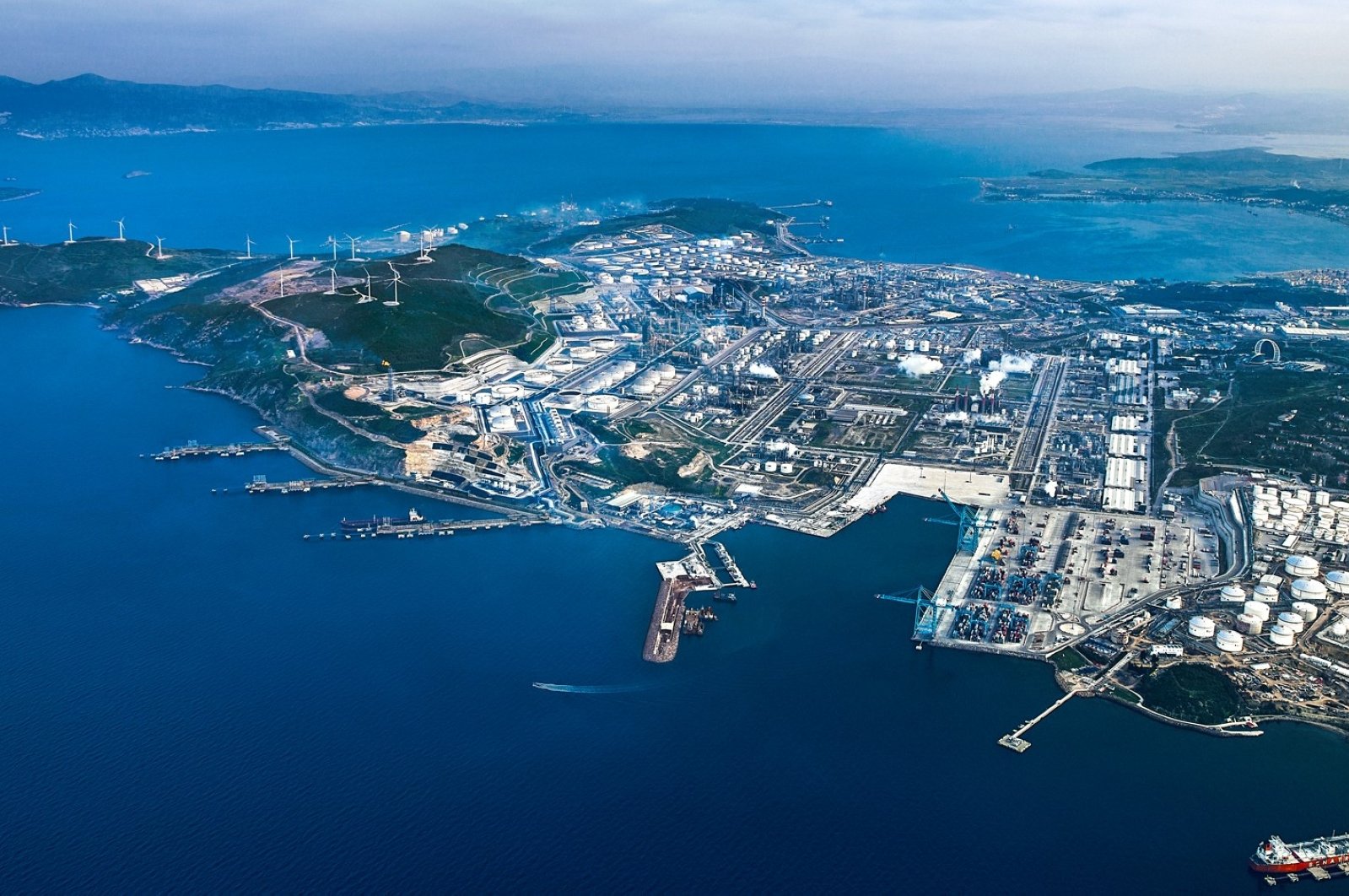 An aerial view of the Aliağa peninsula in the Turkish Aegean province of İzmir that hosts SOCAR's Petkim, Turkey, April 1, 2019. (Photo courtesy of Petkim)
by DAILY SABAH Jun 16, 2021 2:54 pm
RECOMMENDED

Turkish and Azerbaijani energy companies are planning joint investments in nearby regions, an official said Wednesday, a day after President Recep Tayyip Erdoğan signaled such a move.

"The country we invest in is not clear yet. But it will not be far, we may have assessments for close geography,” Vagif Aliyev, deputy chairperson of the board of directors at Azerbaijan’s state energy company SOCAR, told reporters.

Aliyev also signaled potential cooperation with the Turkish Petroleum Corporation (TPAO) on the natural gas reserves that Turkey has discovered in the Black Sea.

Erdoğan Tuesday held a meeting with his Azerbaijani counterpart Ilham Aliyev, after which he said talks were held on potential cooperation between Turkey’s state energy company and SOCAR in other countries.

His remarks came during a visit to the symbolic city of Shusha in Nagorno-Karabakh, which was liberated from Armenian occupation last November after 28 years.

“We are pleased with the investments of Azerbaijani companies in Turkey, especially SOCAR,” Erdoğan said.

“We also discussed the investments of SOCAR and Turkish Petroleum in third countries. In the coming period, we will further improve the scope of our trade and economic cooperation,” the president noted.

SOCAR and TPAO have worked together on various projects since 1994. Aliyev said there are opportunities to utilize this experience in third countries.

He stressed they are initially considering nearby energy-rich regions instead of far-off countries.

“The common view of the presidents on this issue is an instruction for us,” he noted.

“SOCAR and TPAO have been co-investing since 1994. We want to continue that, of course. But the country is not certain yet, we may have assessments. The third country in question could be a place in close geography. Not Singapore or Africa, for example,” he said.

The Azerbaijani giant is one of the largest foreign investors in Turkey. Its investments in the country have reached around $16.5 billion (TL 141 billion) so far, Aliyev said.

The amount will have reached around $19.5 billion upon completion of all ongoing projects of its Turkey subsidiary, SOCAR Turkey.

The company began investing in Turkey after it acquired the country’s leading petrochemical company Petkim in 2008 for $2 billion.

In addition to Petkim, SOCAR Turkey’s investments include STAR Refinery, the Trans-Anatolian Natural Gas Pipeline Project (TANAP) that transports Caspian Sea gas through Turkey and onward to Europe, and Petlim, the largest container port on the country’s Aegean Sea coast.

Also addressing the meeting, SOCAR Turkey CEO Zaur Gahramanov said they have an ultimate goal to combine Petkim and STAR Refinery, adding that the process could take a couple of years.

Gahramanov said they are thinking of an initial public offering (IPO) after the merger.

SOCAR also has plans for another petrochemical facility investment in Turkey's western province of Izmir and has been in talks with other companies, including British Petroleum (BP). The facility reportedly has an estimated cost of $1.8 billion.

Yet, the investment was delayed to the last quarter of last year, before the plan was put on hold after BP last June sold its petrochemical business to privately owned rival Ineos for $5 billion.

Aliyev said they are now in talks with Ineos and other investors.

The decision on the investment will become clear in 2022, Aliyev said.

“We certainly do not look warmly at the long-term postponement of our Mercury project, which will be our second petrochemical investment in Turkey. We will make this investment. We can do this with an experienced partner in petrochemicals or with a financing partner,” he noted.

“The realization of other petrochemical investments on the agenda of Turkey does not affect our commitment to the Mercury project.”

Aliyev also elaborated on Turkey’s recent natural gas discoveries in the Black Sea, dubbing it important from a strategic perspective.

He signaled SOCAR and TPAO could work together on field development and production activities.

“In theory, it may be possible for us to work together with the Turkish Petroleum Corporation in field development and production activities. Professionally, it is in our area of interest,” Aliyev said.

Turkey earlier this month announced it discovered 135 billion cubic meters (bcm) of additional natural gas in the southern Black Sea, raising the total discovery in the region to 540 bcm.

The gas find could transform Turkey’s dependence on Russia, Iran and Azerbaijan for energy. Erdoğan has said his country was determined ultimately to become a net exporter.

The nation currently imports nearly all of the gas it consumes annually. It consumes between 45 bcm and 50 bcm of natural gas each year, for which it pays between $12 billion and $15 billion. It imported 48.1 bcm of gas last year, up 6% from a year before, of which a third was from Russia.

Turkey plans to begin pumping gas from the Black Sea field in 2023, but must first build the offshore pipeline network and processing facilities. The field is expected to reach sustained peak production from 2027.