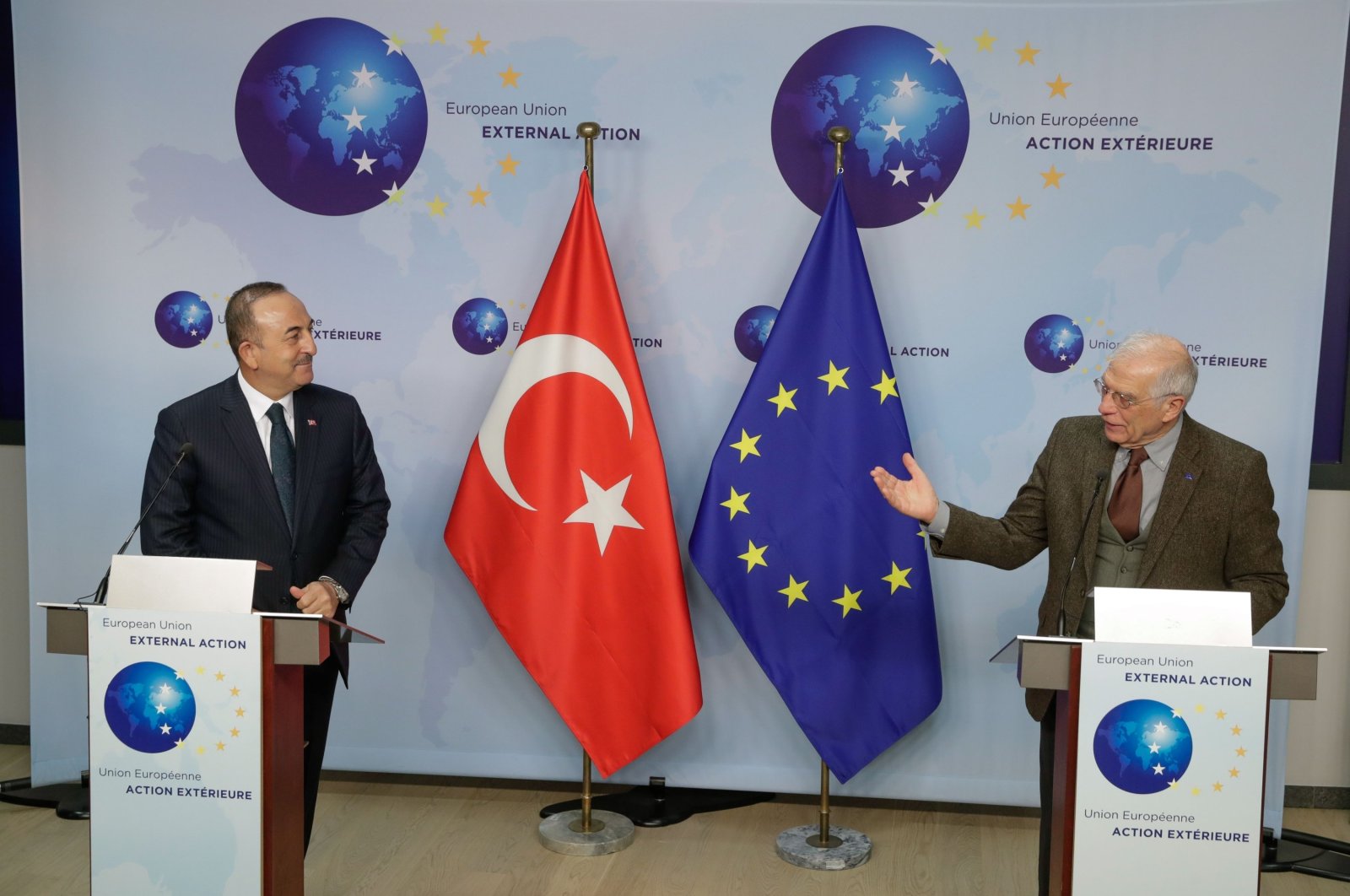 Foreign Minister Mevlüt Çavuşoğlu (L) and High Representative of the European Union for Foreign Affairs and Security Policy Josep Borrell give a joint statement ahead of a meeting at the EEAS in Brussels, Belgium, Jan. 21, 2021. (AFP Photo)
by Betül Usta Mar 08, 2021 12:42 pm
RECOMMENDED

The revitalization period in Turkey-EU relations is about to gain speed with intensified diplomatic contact between the two sides in the upcoming days.

While Turkey aims to promote peace and cooperation in its region in line with principles based on fairness and legitimacy, the country is expected to host high-level officials from Brussels, including European Commission President Ursula von der Leyen and European Council President Charles Michel in the following period.

Diplomatic sources say that the dialogue on the possible next steps is continuing, and there is a more positive attitude from both sides.

Five topics are expected to dominate the agenda during the upcoming meetings: the renewal of the migrant deal, updating the customs union, visa liberalization, Turkey's proposal for an Eastern Mediterranean conference and the opening of new chapters in Turkey's accession process to the EU, in which Turkey was officially recognized as a candidate for full membership in 1999, and negotiations for full membership were started in 2005.

Since last year, when the renewed attacks on civilians by the Assad regime in northwestern Syria risked another wave of migration to Turkey, Ankara has also frequently expressed that as years have passed since the deal was made and conditions have since changed, a new road map to tackle the issue of irregular migration is now required. During Foreign Minister Mevlüt Çavuşoğlu’s visit to Brussels earlier this year, he also said that Turkey and the EU voiced a consensus on the need to renew the March 18 migration deal.

Çavuşoğlu’s visit came after a tumultuous year in Turkey-EU relations marked by disputes on several issues, including the Eastern Mediterranean tensions, Turkey's role in Syria, the migrant crisis and the stalemate in Turkey's accession process to the bloc. During a meeting in Brussels on Dec. 10, EU leaders decided to draw up a list of Turkish targets to sanction. But since then, the rhetoric on all sides has mellowed dramatically as Turkey and the bloc voiced its intent to "turn a new page." Turkey has recently reiterated that it is part of the bloc and sees its future in the EU, while it will continue efforts toward full EU membership. Turkish officials have also said that they hope for progress in 2021 and expect the bloc to take definitive action to this end. Most recently, the EU in January decided to hold off on potentially sanctioning Turkey thanks to positive developments made during a meeting with the bloc's foreign ministers.

According to the migrant deal, visa freedom for Turkish citizens was also a perk of the agreement. In addition, the customs union between Turkey and the EU was to be updated. In exchange for these promises, Turkey took responsibility for discouraging migration through the Aegean Sea by taking stricter measures against human traffickers and improving the conditions of Syrian migrants living in Turkey. Although the first stage of financial funding was provided to Turkey, the EU has yet to fulfill the second stage or other provisions such as establishing the visa-free deal for Turkish citizens and updating the customs union – a trade agreement that came into effect on Dec. 31, 1995, following the March 6, 1995, Decision of the European Community-Turkey Association Council to implement an association between the two parties in which goods may travel between the two entities without any customs restrictions.

During the upcoming diplomacy traffic, Turkey is also expected to repeat its proposal for an Eastern Mediterranean conference. Çavuşoğlu recently said that President Recep Tayyip Erdoğan's proposal for the conference, with the participation of all actors in the region, is the latest example of Turkey's sincere desire for cooperation.

Turkey, which has the longest continental coastline in the Eastern Mediterranean, has rejected the maritime boundary claims of Greece and the Greek Cypriot administration, stressing that these excessive claims violate the sovereign rights of both Turkey and Turkish Cypriots. Last year, Turkey sent several drillships to explore energy resources in the Eastern Mediterranean, asserting its own rights in the region as well as those of the Turkish Republic of Northern Cyprus (TRNC).