Uncertainty on and off the pitch a month before Euro 2020 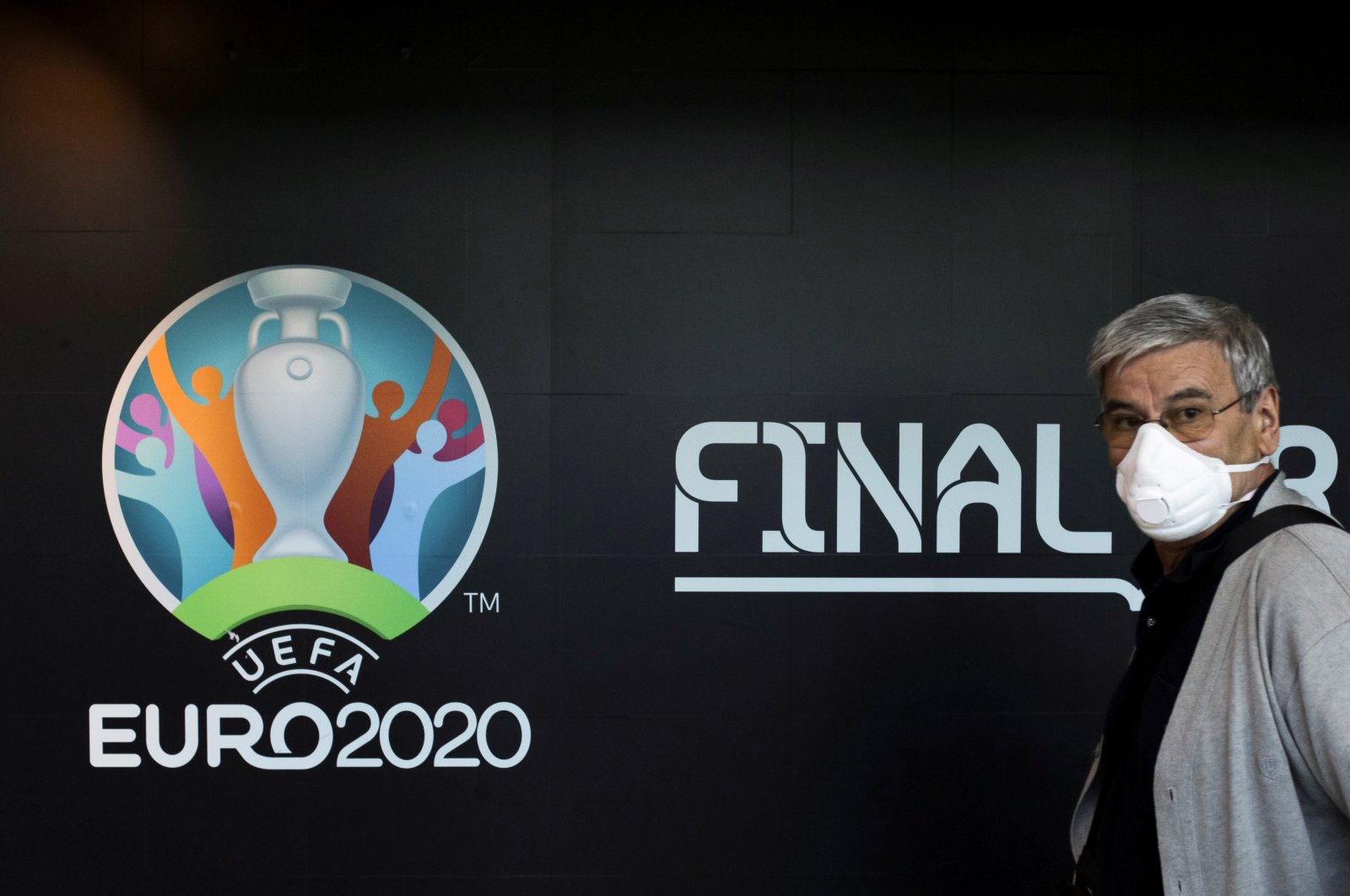 A traveler in a protective facemask passes by a logo of the 2020 UEFA European Football Championship at Bucharest Henri Coanda International Airport, Otopeni, Romania, March 16, 2020. (Rueters Photo)
by Daily Sabah with AFP May 12, 2021 11:52 am
RECOMMENDED

The pandemic-delayed Euro 2020 will finally kick off June 11 when Italy will take on Turkey in Rome but the tournament, being held for the first time at venues all across the continent, is still overshadowed by the COVID-19 health crisis.

UEFA's focus this week was on the headache of what to do with the Champions League final amid pressure from the U.K. government to move the all-English showpiece from Istanbul.

European football's governing body has already dealt with similar difficulties surrounding the Euro, which will be staged in 11 cities, concluding with the final in London on July 11.

Dublin was due to be the 12th host but was dropped in April after local authorities refused to give guarantees about a minimum number of spectators attending matches.

Its games have been moved to St. Petersburg and London, while Bilbao was dropped for the same reason but Spain will still stage four matches with Seville stepping in.

After a year of football in empty stadiums, UEFA was determined supporters would be able to attend games at the 24-team European Championship.

The remaining venues have all confirmed fans will be allowed to fill between 25 and 100% of capacity, with the exception of Munich.

The German city aims to host at least 14,500 fans at the Allianz Arena, but Mayor Dieter Reiter said in April there had been "no promises, of any kind, to guarantee spectators."

In contrast, Budapest could allow a full house of 61,000 at the Puskas Arena, albeit with "strict stadium entry requirements for spectators."

Nevertheless, Euro 2020 will not quite be the pan-continental party envisaged when, under former president Michel Platini, UEFA announced the format of Euro 2020 to mark the 60th anniversary of the competition.

No travel exemptions are being made for ticket-holders, meaning those entering countries from abroad could have to quarantine on arrival. They may simply not be allowed in at all.

Fans who are able to get in will be assigned a 30-minute time slot to arrive at stadiums, in an attempt to limit gatherings outside grounds.

After all that, there will be the football, and the hope is the second 24-team European Championship will live up to expectations on the field.

The list of contenders is a long one, and it remains to be seen which teams might benefit from the one-year postponement.

Twelve months ago England was sweating on the fitness of Harry Kane and Marcus Rashford before the tournament was put on ice. Now the wonder is how manager Gareth Southgate will accommodate emerging superstars like Phil Foden and Mason Mount.

With group games at Wembley, and the incentive of the semifinals and final being played at home too, England may sense this is its chance.

Yet it can hardly ignore the multiple threats from elsewhere, not least the one directly across the Channel.

France, after all, are the reigning world champions and aim to repeat its performance in 2000, when it won the Euro as World Cup holders.

"The other nations are progressing. They're not sitting still, but when a competition starts we want to go as far as possible."

Portugal, who defeated France in the Euro 2016 final, will not give up its title easily, even with Cristiano Ronaldo now aged 36.

However, its in the same group as both Les Bleus and Germany.

There are nevertheless big doubts about the Germans, in its last major tournament before Joachim Low stands down as coach.

Since making a mess of the 2018 World Cup, Germany has not had its problems to seek, including losing 6-0 to Spain and then being beaten at home by North Macedonia in World Cup qualifying.

After its own 2018 World Cup debacle, when coach Julen Lopetegui left on the eve of the tournament, Spain looks in better shape now under Luis Enrique and will be at home in Seville in the group stage.

The Netherlands and Italy are two more rejuvenated teams playing group games at home, while World Cup semifinalists Belgium remain the top-ranked nation in the world and are another side to be taken very seriously when the football, eventually, takes center stage.

Turkey, in the meantime, will face four-time World Cup champions Italy, as well as Switzerland and Wales in Group A. The matches will be held in Rome and Baku.

However, the team under veteran coach Şenol Güneş has displayed some inspired performance. It qualified for Euro 2020 in the second position from Group H, behind current world champions France. It won seven out of the 10 matches in the qualifiers, including a 2-0 victory over France, and lost only one match.

It's also in good form in the recent World Cup 2022 qualifiers, beating the Netherlands 4-2 and Norway 3-0.

On his team's chances in Euro 2020, Coach Güneş said: "If we want to move to the second round, we need to come out of a group that includes Italy, Switzerland and Wales. Our opponents might be strong but we need to level up as well. We need to move up between 10-20th place in the FIFA ranking."