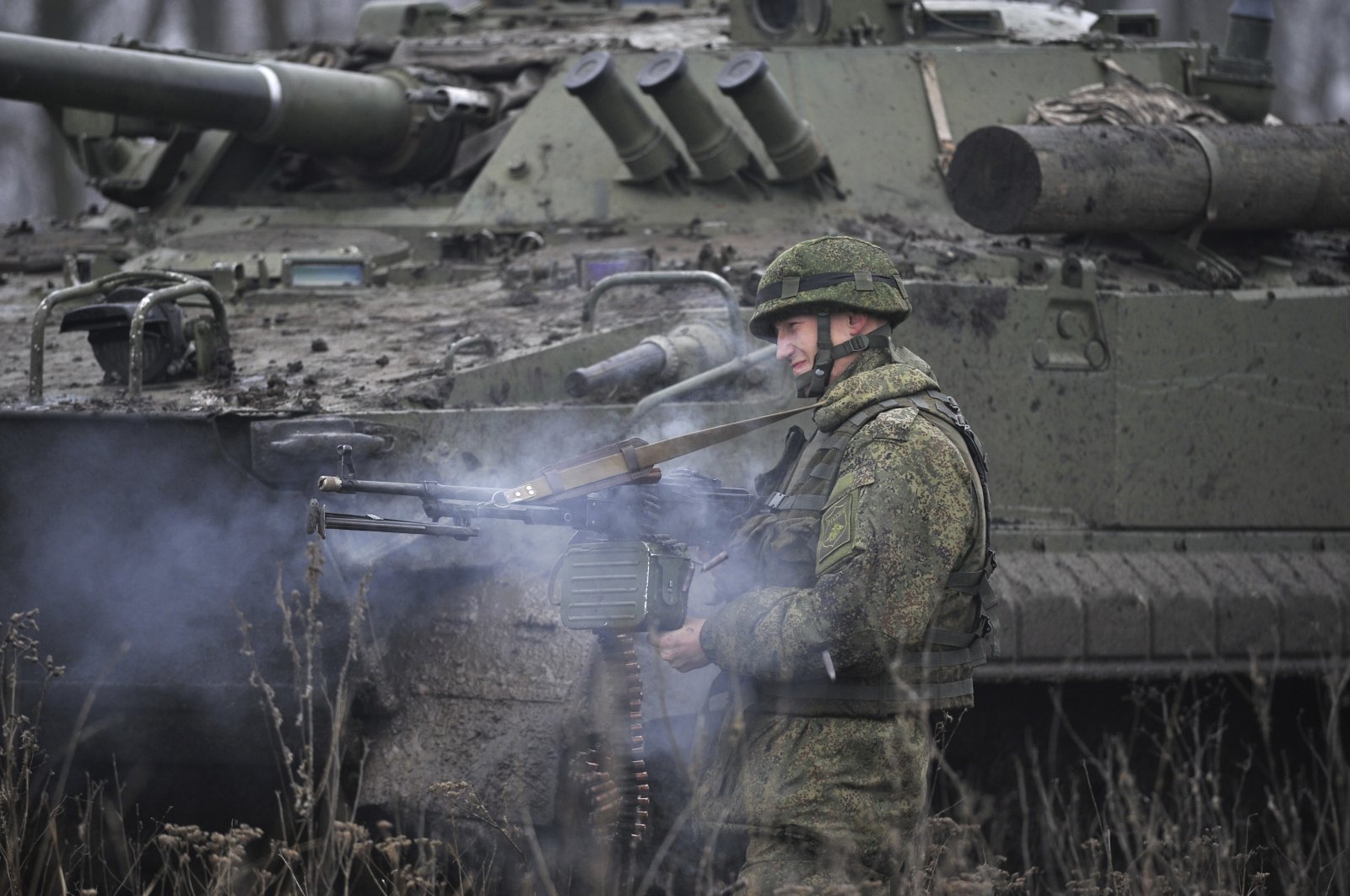 A Russian army soldier takes part in drills at the Kadamovskiy firing range in the Rostov region, southern Russia, Dec. 10, 2021. (AP Photo)
by Daily Sabah with DPA Dec 13, 2021 9:15 am
RECOMMENDED

The European Union's foreign ministers decided to impose sanctions on the Wagner Group, a Russian mercenary firm, at a meeting in Brussels on Monday, an EU diplomat has confirmed.

The sanctions apply to eight individuals, the Wagner Group and three other associated entities. The measures include a travel ban to the European Union and a freeze on any assets held in the bloc.

The restrictions also mean EU entities and individuals can not do business with those implicated. The sanctions enter legal force immediately on Monday after their publication in the EU's Official Journal, a legal register for EU regulations.

Last Friday, a senior EU official told to Deutsche Presse-Agentur (dpa) the sanctions are a result of the Wagner Group's activities in Syria, Libya and Ukraine, as well as allegations of severe human rights violations.

There was recent concern in the EU over a possibility the Wagner Group was to be deployed to Mali. The EU members threatened to end their support for the crisis-hit state if the Russian mercenary group was awarded a contract. The EU has been active in military training missions in Mali to help armed forces in the region combat terrorist groups.

Reports of Wagner's existence emerged at the beginning of the war in Ukraine, which was sparked in 2014 and spurred allegations the Kremlin was backing a separatist insurrection in the east of the country. The group later reappeared in Syria, where it bolstered the embattled regime of Bashar Assad and was accused by Russian media of torturing detainees and securing oil assets.

Wagner fighters have since resurfaced in politically volatile African countries like the Central African Republic as military "instructors" and Libya, where they were propping up the rival administration of putschist Gen. Khalifa Haftar. Activists have accused Wagner of committing "war crimes" in Syria, while the United Nations has suspected the group of human rights violations.

The European Union's foreign ministers were also expected to discuss new sanctions to deter Russia from invading neighboring Ukraine after Moscow massed troops on the border, according to EU diplomats. Although EU foreign ministers want to de-escalate the situation with Moscow, "sometimes you have to whisper softly but carry a certain stick," an EU diplomat said.

The tensions between Russia and the 27-nation bloc over Russia's growing military presence on Ukraine's border have been skyrocketed for weeks. According to NATO, Russia has gathered between 75,000 and 100,000 soldiers leading to fears of a repeat of 2014, when Russia annexed the Ukrainian peninsula of Crimea and began supporting pro-Russian separatists in eastern Ukraine.

Last Friday, the Ukrainian Navy said in a statement that Russia had also blocked off almost 70% of the Sea of Azov around the annexed Crimean Peninsula.

G-7 foreign ministers agreed at a meeting over the weekend that if Russia crossed the border into Ukraine, it "would have enormous political and economic consequences." EU members Germany, France and Italy are also in the G-7.

EU foreign ministers were also set to discuss the deteriorating economic and humanitarian situation in Afghanistan after the withdrawal of the United States and NATO troops in the summer. China's recent aggression and customs sanctions on Lithuania after Vilnius attempted to develop closer ties with Taiwan are to feature as well, according to a senior EU official.

U.K. Foreign Secretary Liz Truss said Russia could face all forms of economic sanctions if Moscow decides to move ahead with invasion plans. She also said that the country may be ready to look again at Britain's anti-money laundering laws, which some see as a way for Russian elites to hide their money, according to British newspaper The Guardian. Truss underlined that any military operations against Ukraine would come with a "severe cost" for Russia.

While Kremlin spokesperson Dmitry Peskov told Russian media that the country's leader Vladimir Putin told his counterpart U.S. President Joe Biden in a video call last week that Russian troops posed no threat to anyone, many European states along with American officials regard these claims with suspicion.

The coming economic sanctions could include the banning of access to global financial markets and establishing new conditions for financing Russia's public debt. Also on the agenda is the cancellation of the Russian Nord Stream 2 gas pipeline to Germany.

Germany's new foreign minister, Annalena Baerbock, said on Sunday that the pipeline will not be allowed to operate in case of Ukrainian "escalation." The decision came as an agreement between Germany and the U.S.

“In the event of further escalation, this gas pipeline could not come into service,” Baerbock told German television station ZDF.