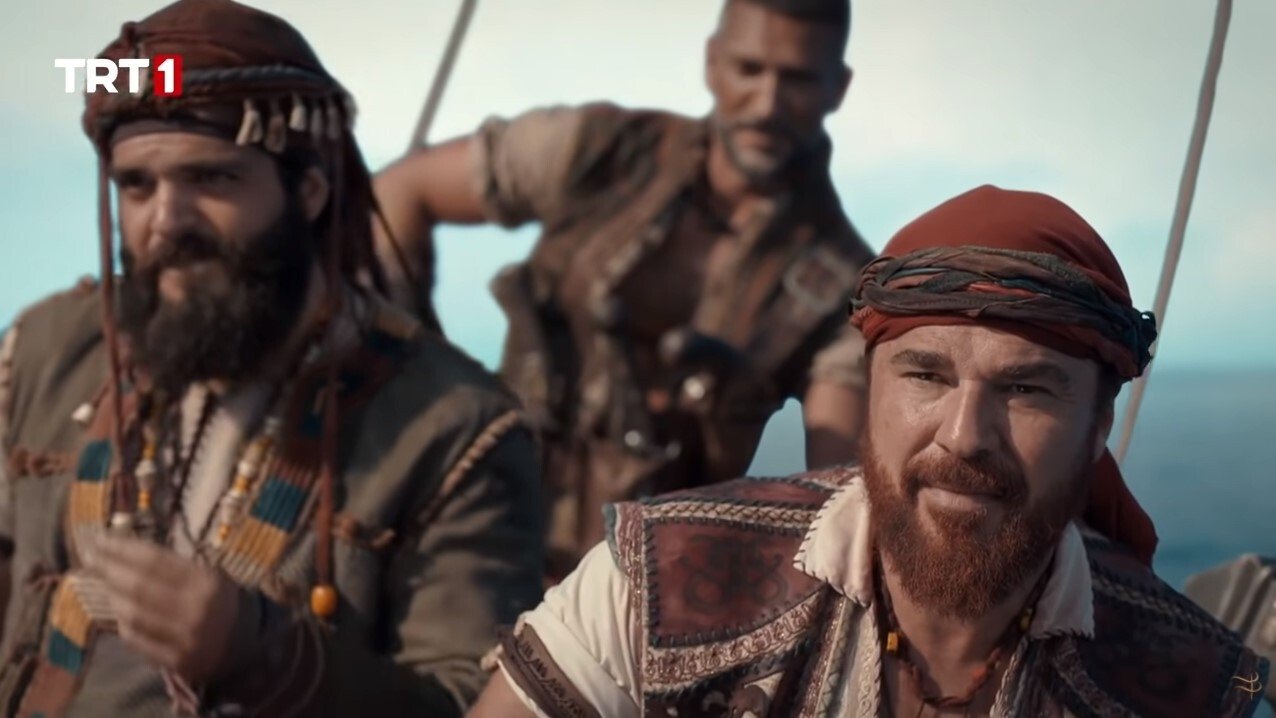 Actor Engin Altan Düzyatan as Oruç Reis in a still shot from "Barbaros: Sword of the Mediterranean."
by Rajagopalan Hemamalini Oct 13, 2021 12:53 pm

'Barbaros: Sword of the Mediterranean' will take viewers on a historical journey across the Ottoman Empire with the life of 16th-century admiral Hayreddin Barbarossa and his brothers. All elements, from costume designs to music, contribute to the Turkish period drama's proper narration

If you live in Turkey and have grown up listening to the adventures of Ottoman admiral Hayreddin Barbarossa, also known as Hızır Hayrettin Pasha, and his brothers, then a sea voyage aboard their barque, amidst the dangers posed by a 16th-century maritime world, would surely excite you.

The ES Film’s newest production “Barbaroslar Akdeniz'ın Kılıcı” (“Barbaros: Sword of the Mediterranean”), which started airing on TRT1 – the first Turkish national television network, owned by state broadcaster TRT – in early September this year, takes spectators on a historical journey with the story of the Barbarossa brothers, whose naval campaigns helped establish Ottoman supremacy in the Mediterranean.

The Barbarossa brothers, namely Oruç (Aruj), Hızır (Khizr), Ishak and Ilyas, were born as the sons of the Muslim sipahi (contracted soldier) Yakup in Lesbos. Yakup was a potter and traveled on a boat to sell his goods around the island and beyond, which helped his sons to learn how to sail. Then all four Barbarossa brothers, “Barbarossa” being an alias for Hızır and Oruç because of their orange-colored beards, sailed for years as sea traders before they turned corsairs in the Mediterranean. After the leader of the Barbarossa corsairs, Oruç, died in a Spanish attack, Hızır took the lead and became the “Kaptan-ı Derya” (chief admiral) of the Ottomans.

At a time when there were no treaties on sharing of international waters and the country borders were not sacrosanct, the sword power reigned supreme and the mighty always won. And “Barbaros: Sword of the Mediterranean” is quite true to this time period in its portrayal of the story of the Barbarossa brothers and doesn’t cut any corners.

The period drama, set in Alexandria, Lesbos (Midilli), Kalymnos and Istanbul, is written by Cüneyt Aysan, Ozan Aksungur and Oğuz Ayaz. Directed by Doğan Ümit Karaca and Adeel Adeeb, the serial unfolds an action-packed adventure, whose episodes have been shot in quaint Istanbul, itself replete with history. The cast includes Engin Altan Düzyatan of the much-acclaimed “Diriliş: Ertuğrul” (“Resurrection Ertuğrul”) – a production based on the life of Ertuğrul Ghazi, a brave 13th-century Muslim warrior, that is widely popular in many Asian countries, especially in Kashmir in the Indian sub-continent - Ulaş Tuna Astepe, Yetkin Dikinciler and Caner Topçu as Oruç, Hızır, Ishak and Ilyas Reis respectively. The serial is rated 9 on the movie database website IMDb and has attracted rave reviews.

Outlook on tale of Barbarossa brothers

Seeing that Dr. Sinan of Turkish series “Merhaba Hayat” (“Hello Life”) had transformed into the role of Ishak Reis, sporting a long kaftan and a big mustache, was a pleasant surprise for me. Unlike my previous experience of watching Turkish serials, which I caught up with many years after they were originally released, “Barbaros: Sword of the Mediterranean” has also introduced me to the feeling of anticipation to see the story move forward. YouTube and other web channels are already witnessing an unprecedented number of views after the airing of only four episodes, with the next one slated for release on Oct. 14. From the viewers’ comments, the need for good quality English subtitles is clearly evident, an issue that has to be addressed immediately to sustain international viewership.

A work of fiction, the series brings alive the history of a time and place that belonged to ruthless pirates, seafarers and slave markets, giving an insight into the life under Ottoman rule. While the representation of massacres unleashed by pirates is disturbing, one must remember that this was the order of the day. An orphanage dedicated entirely to the victims of pirate attacks is only a small indicator of the rampant lawlessness in those times.

Women brandishing their swords, taking part in trade and even voicing their opinions seem delightfully fictitious but may not be entirely untrue. A little research reveals that the Ottoman women were in fact quite empowered in social, political and legal systems. They had the right of inheritance, marriage, divorce and even won cases in courts of law.

The production itself is evidence of an in-depth study and effort that has gone into recreating the bygone period. On the social front, the unyielding camels, toys crafted from wood and iron, the shirt and sirwal (a form of baggy trousers) clad women with headscarves, give us a feel of medieval times. The majestic barques, barquentines, and schooners sailing beautifully on the blue sea used by kaftan and sirwal clad sailors played by the tall and handsome Turkish actors all add up to a picturesque narration.

Background drums that beat in rhythm with the majestic vessels swaying gracefully on the sparkling blue sea accompanied by the euphonious music of the Turkish "ney," the maritime songs of sailors, the rhythmic sculling by oarsmen and the lighted lanterns conferring a jewel-like aspect to the yachts against a misty night sky all conjure up a scene that teleports the viewer to a different era. To me, these also rekindled my childhood memories of watching “Benhur” on the big screen, especially the drum beats that drive the paced rowing. Unlike my long-enduring habit of watching all the Turkish TV dramas on a cell phone while on the move, I resolved to cast the episodes of “Barbaros: Sword of the Mediterranean” onto my 40-inch living room TV and enjoyed it with my favorite brand of crisps. This seemed to be a befitting tribute to the spectacular production.

It is a common perception that TV dramas and movies like the Barbarossa brothers’ serial have merit only as entertainment channels and have very little pedagogical value. And yet for students who, like me, may find studying history an overwhelming task that involves remembering facts of a bygone era, these productions are a great way to revive their interest in the subject. The settings and costumes are more vivid alternatives to the black and white sketches found in textbooks to help reconstruct the images in our minds. The subtitles in the serials and movies are also a great resource for language learners.

Watching the period dramas, you may realize that while the nature and extent of uncertainties faced by a common man in day-to-day life may have changed, we still live at the mercy of destiny to a large extent. We can only marvel at how time changes so many things and yet the human greed for power, wealth and material gains remains unchanged. Science shows us how the human brain structure has evolved over the years. However, this has only resulted in conceiving better and more advanced means of fulfilling our never-ending wants even faster, not in reducing our needs. I think true human evolution will be realized only where there is an unconditional harmony, within us and without – a peaceful co-existence where there is neither a struggle for existence nor any need to assert power.