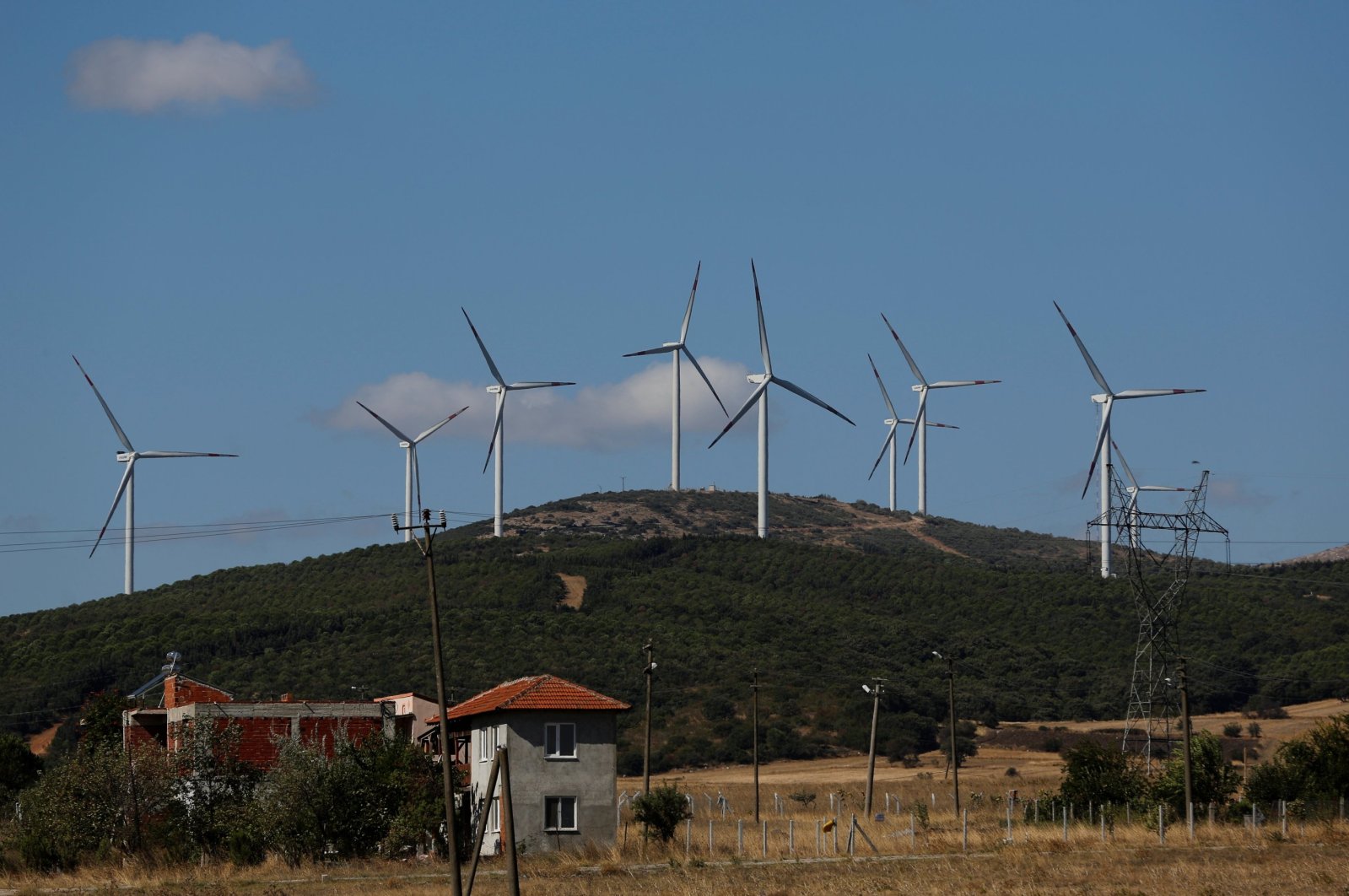 Wind turbines used to generate electricity are seen near the town of Susurluk in Balıkesir province, Turkey, Aug. 31, 2017. (Reuters Photo)
by Elina Alimova Nov 22, 2021 9:05 am
RECOMMENDED

Dönmez, who was speaking at the opening of the 11th Turkey Energy Summit, said the share of renewable energy sources in electricity production exceeded 42% in 2019 and 2020, and thus the 2023 target has already been achieved.

Leaders of the energy industry met Monday at the summit held at the southern holiday resort city of Antalya. The two-day event is sponsored by the Energy and Natural Resources Ministry with the Energy Market Regulatory Authority (EPDK).

This year's summit will provide a platform to discuss and exchange ideas on important issues such as investments in the exploration and production of natural gas, the future of electric vehicles and digitalization in the production and distribution of electricity. The summit is held in conjunction with the ISTRADE Energy Trade and Supply summit.

The minister asserted that as the world is going through a difficult period due to the COVID-19 pandemic as well as global economic troubles, Turkey is strengthening ties with market participants more than ever. “The energy sector is the engine of Turkey’s growth, with its volume of business and its huge contribution to the country's economy,” Dönmez said. “At the stage we have reached today, we can talk about an ecosystem that has a solid infrastructure, is more resilient to crises and can implement medium and long-term strategies.”

The minister, commenting that there has been a great change in global energy markets, especially in terms of price, emphasized that Turkey is one of the fastest-recovering countries in this process.

“Through subsidy, which we provided in electricity, natural gas and fuel prices, we provided TL 127 billion ($11.3 billion) support to our citizens,” he said, adding that last week, it was announced that a fixed 2% payment on electricity bills for the funding of state broadcaster TRT was removed.

Besides the fixed payment for the TRT and another 1% payment levied for outstanding energy costs was also set to be lifted.

Dönmez noted that with the abolition of both funds, the support they will provide to the citizens will be approximately TL 3 billion annually.

Also speaking on Turkey’s exploration activities in the Black Sea and the extraction of the already-discovered gas in the Sakarya Gas Field, the minister said the engineering works have been completed in the field.

“We will do the first welding by placing the pipes under the water in the spring of 2022,” he said.

The subsea pipe laying will be carried out in collaboration with Italian multinational oilfield services company Saipem, who will transport and install the pipeline in the spring of 2022.

A subsequent second discovery was made in June of 135 bcm, which brought the cumulative gas find to 540 bcm.

July also saw progress with the completion of reservoir-2 and reservoir-3 appraisal tests on the Türkali-2 well in the Sakarya field.

Last week, a daily gas flow of 650,000 cubic meters was discovered in the reservoir-1 test of the Türkali-2 well.

Noting that the fourth drilling ship will arrive in Turkey in the spring of 2022, Dönmez said: “The fourth ship has a double tower design and is capable of operating in harsh sea conditions. It works more safely even in high-pressure reservoirs.”

The new ship to be operated by Turkish Petroleum Corporation (TPAO), long sought by the national oil company, can operate at a maximum depth of 3,665 meters (12,024 feet).

Energy Market Regulatory Authority (EPDK) Chairperson Mustafa Yılmaz, also speaking at the summit, reiterated that Turkey has set a net-zero emission target for 2053 in line with the Paris Agreement, said, “it is essential to take serious steps within the framework of the net-zero emission goal and to manage the process effectively and fairly.”

Stating that the two issues are important for the upcoming period, Yılmaz said the first of these is the domestic and national automobile that Turkey has been dreaming of for half a century, which will come off the production line at the end of 2022.

“The prevalence of electric vehicles depends on the existence of sufficient charging infrastructure and the ability to provide charging services throughout the country,” he noted saying that he hopes that the proposal submitted to the parliament will be enacted in a short time. “Another issue I see as important is carbon pricing,” he said, noting that EPDK is ready to do its part after the climate council to be held next January when the country's roadmap for carbon reduction becomes clearer.

“I would like to emphasize that the carbon market will be made ready for operation as soon as possible under the supervision of EPDK,” he said.

Yılmaz went on to say that digitalization is of vital importance for the energy sector and that it will contribute significantly to growth and employment.

The EPDK plans to share a national smart meter systems project with the public in the coming days which was developed in cooperation with the energy sector.

“With this project, which goes by the name MASS,” Yılmaz said, “we will implement a mobile application system that measures the amount and quality of the energy we consume, contains important information about how this energy will be provided to the customers most efficiently and shortly, and that can guide the interventions or meter failures by informing the distribution companies.”

During the summit, leading sector representatives and experts will also discuss issues such as the effects of the Green Deal, fuel and liquefied petroleum gas (LPG) markets, the aftermath of the pandemic and global economic developments on commodity markets.

The summit, which has brought together all the energy sector stakeholders for 11 years, is the first meeting of leaders after a long break due to the ongoing COVID-19 pandemic.

In addition to sector players, energy authorities from government institutes will also participate in the summit. Within the scope of the summit, sections on several subjects, including production, trade and distribution in the Turkish electricity market, data analytics in energy and artificial intelligence and the biodiesel sector in Turkey and sustainable air travel fuel, will take place.