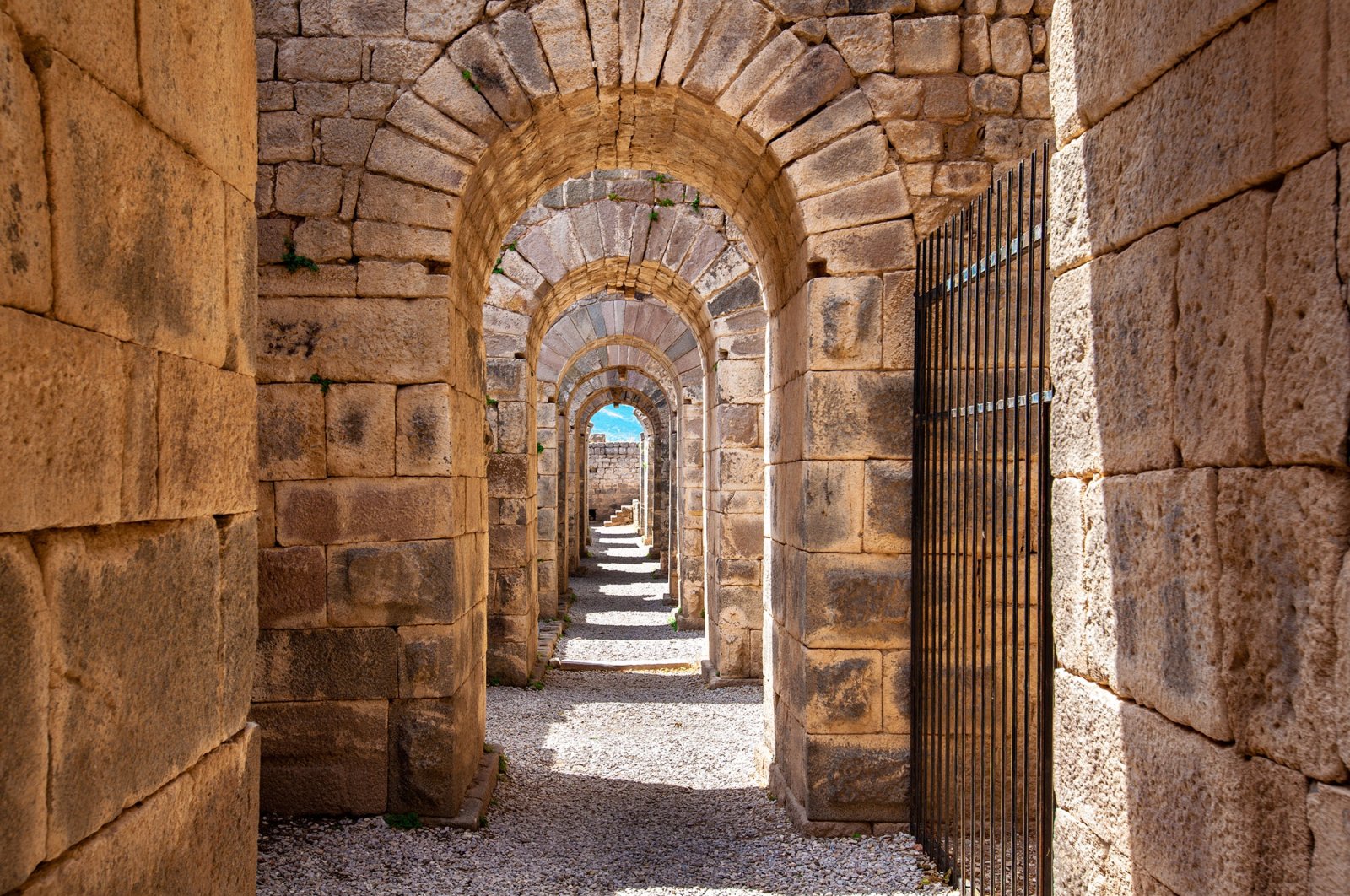 Not many people know the nation has 18 of the protected locations, among the most in the world, with more on the waiting list. Today, we will take a look into seven of the most fascinating spots

At the beginning of 2020, I set a personal travel target to visit all the UNESCO World Heritage Sites in Turkey. So far, I have crossed 11 out of 18 off my list. You can check out our "World Heritage in Turkey" series to see how many you've seen so far as well!

Turkey’s cultural and historical diversity is stunning to many. Every square inch of this land, known also as the “cradle of civilizations,” abounds with history. You look around and easily come across ancient Greek ruins in one direction, the remains of an ancient Roman city in another direction all while being surrounded by glorious Ottoman structures. Throughout the past centuries, many kingdoms and empires fought for the rulership of Asia Minor. The Hittites, Phrygians, Lydians, Greeks, Romans, Byzantines, Seljuks, Anatolian Beyliks and Ottomans are only the tip of the iceberg. In addition to these historic settlers, countless figures and empires reigned over Anatolia.

The Ancient City of Aphrodisias

A city dedicated to the Goddess of love and beauty: Aphrodite

Aphrodisias is one of the most well-preserved ancient cities in Turkey. It is located in the town of Karacasu, a part of the Western (Aegean) Turkish province of Aydın.

The oldest artifacts unearthed in Aphrodisias show that the earliest human activity in the area dates back to 5000 B.C. The lush valley, cut by the Dandalaz River, upon which Aphrodisias was built was settled by the ancient Greeks in the sixth century B.C. By the second century B.C., when the city received the name Aphrodisias, it was one of the most important cities in the Carian Province of the Roman Empire.

Besides its marvelous intact ruins and massive size, Aphrodisias also boasts one of the best-preserved stadiums of the ancient Greek world, with a seating capacity of 30,000.

It became the center for the cult of Aphrodite, for whose worship the Temple of Aphrodite was constructed. A magnificent sculpture of Aphrodite stood within this temple sanctuary that attracted people from all over Ancient Greece.

You’ll also find Aphrodisias has an abundance of meticulously carved artisanal sculptures that were produced in the Sculpture School within the ancient city. Sculptors in Aphrodisias were highly advanced given the abundance of marble reserves around the city. These reserves made the city relatively wealthy, which is reflected in all the monuments, sculptures and other works that are still gloriously standing. Most of these date back as early as the first century B.C., defying the centuries and disruptive natural elements.

Before commencing your visit, I highly recommend you to stop by the Aphrodisias Museum, located inside the ancient city, which has one of the most impressive collections of artifacts unearthed during the excavations in Aphrodisias.

Compared to other heritage sites on this list, Aphrodisias is relatively undiscovered among tourists, yet at a time that socializing is limited by the COVID-19 pandemic, you can benefit from the unpopularity of this site and safely visit it.

The ruins of Ani

The ancient city of Ani is situated in the easternmost Turkish city of Kars, adjacent to the Turkish-Armenian border.

Rising to prominence around the fifth century A.D., Ani served as the capital of Medieval Armenia for centuries, starting with the Armenian Kamsarakan Dynasty. At its peak, Ani had a population as high as 100,000 and was one of the main hubs for trade and art in Anatolia, having control over a branch of the Silk Road.

Starting with the Armenians, followed by the Byzantines, then the Safavids and later the Ottomans, many forefathers of Anatolia ruled Ani, which resulted in Ani’s characteristic amalgamation of cultures, languages and religions.

When visiting Ani, you’ll immediately be confronted by the long-stretching city wall. Walking around the vast highland Ani is located on can take a few hours, and you’ll be surrounded by breath-taking nature through-out, as well as views of Armenia across the river that borders the city.

The capital of the Hittite Empire

Located in the province of Çorum in Central Anatolia, Hattuşa (often called the Boğazkale Archeological Site) was the capital city of the Hittite Empire. Hattuşa is primarily known for its advanced city planning and beautifully carved ornaments on the Royal Gate, the Lion Gate and the two sphinxes on the Sphinx Gate that are now found at Boğazkale Museum nearby. Also not to be missed is the open-air museum of Yazılıkaya (not to be confused with the Phrygian monument of Yazılıkaya in the province of Eskişehir I talked about in an earlier article) with its well-preserved rock art.

Hattuşa is modern and visitor-friendly, with asphalt roads allowing you to easily visit all the sites across the vast city by car.

Hattuşa makes for a perfect day trip spot for Ankarans. The city is located 200 kilometers (124 miles) away from Ankara and takes approximately two hours 20 minutes (one way) to drive to.

One of the oldest settlements in human history

Çatalhöyük was a fairly large Neolithic and Chalcolithic settlement and is considered to be one of the oldest in human history, dating back to over 9400 years ago. It is also considered by many to be the oldest village or town ever discovered. It is located in the town of Çumra, in the province of Konya.

Excavations conducted in Çatalhöyük shed light on the social and economic life in pre-historic ages. These excavations also revealed that there were no streets in Çatalhöyük and that dwellings were built closely abutting each other like a honeycomb. They typically buried the dead under the floor of these houses and kept the rooms relatively clean, which was interesting to archeologists who found no evidence of littering. Up to 8000 occupied this huge town at its peak, and it remains a remarkably well-preserved site to this today.

Göbeklitepe is Turkey’s latest addition to UNESCO’s World Heritage list. Outdating Stonehenge and the Pyramids of Giza by 7500 years, Göbeklitepe boasts the oldest known temple in history. Apart from illuminating our collective knowledge of the history of religion, the dynamics of a hunter-gatherer society and prehistoric art and agriculture, Göbeklitepe stands out with its massive t-shaped pillars that surround the temple.

This groundbreaking historical site is in the suburbs of Şanlıurfa province (or Urfa in short) in southeast Turkey.

If you are lucky enough, you may meet Mahmut Yıldız during your visit to Göbeklitepe. He is the owner of the land where Göbeklitepe was discovered and the person who made its initial discovery. If he is there, do not be shy and go to talk to him. Mr. Yıldız is a very friendly and talkative person who will tell you his story of stumbling upon Göbeklitepe.

The pearl of western Turkey

The ancient city of Ephesus (Efes in Turkish) is undoubtedly the most renowned historical attraction in Turkey and is situated in the colorful seaside city of Izmir on the west coast of the country. Added to UNESCO’s World Heritage Sites List in 2015, Ephesus attracts thousands of visitors every day from around the world and, in 2019, with approximately 2 million visitors, it was the most visited ancient city in Turkey.

The Artemis Temple, one of the Seven Wonders of the Ancient World, is located in Ephesus. Unfortunately, except for a single column and a few marble blocks, the temple has not survived the years. The façade of the Library of Celsus, one of the most impressive constructions of the ancient world, once housing over 12,000 scrolls, can also be found here. The intricate design on the ceiling of the façade and in the sculptures that guard it astounds visitors. The House of the Virgin Mary and Grotto of the Seven Sleepers are two other attractions that should be seen.

Please note that since the tourism organization of the House of the Virgin Mary is run by the municipality of Selçuk, the Museum Pass is not valid here. (Click here for the visiting hours.)

Located in the colorful district of Bergama, famous for its numerous well-preserved historical sites and unique cuisine, Pergamon is among the top must-see attractions in western Turkey. It has two main ancient sites for visitors to see, The Acropolis of Pergamon and the Ancient City of Asclepion (or Asklepion).

Founded in the third century B.C. by the Hellenistic Attalid dynasty, Pergamon served as the capital city of the kingdom for 15 decades. In subsequent centuries, the ruling powers in Pergamon changed often, yet the city remained one of the most important political, economic and cultural centers in Asia Minor (an archaic name for Anatolia).

Today, the ruins of the important structures of Pergamon, which include the Zeus Altar, gymnasium, the library of Pergamon (which once held a huge collection of 200,000 scrolls), the temple of Athena and the theater (credited as being the steepest theater of the ancient world, built on the western cliff of the acropolis) are some of the notable spots. The Acropolis is located on top of the cliffside, overlooking Bergama, however, visitors can easily access it using cable cars that run from the city center to the ancient city and back.

A quick piece of trivia: parchment paper, made using processed animal skins, was discovered in Pergamon in the second century B.C. as an alternative to when papyrus paper from Egypt was banned. The name parchment was given semi-eponymously, based on the name of the ancient city of Pergamon.

The second main site in the area is the ancient settlement of Asclepion, which is situated in a fertile valley that is adjacent to the base of the hill where the ruins of Pergamon are found.

Asclepion was built in honor of the God of Medicine in ancient Greece, Asclepius, in the fourth century B.C. It served as one of the prime healing and medicine centers in the ancient world for centuries. It is said that, back in the ancient Greek and Roman eras, people flocked to Asclepion to get treated for various physical and mental illnesses. Treatment methods such as sleep therapy, cupping, dream readings by priests and other experimental techniques were applied to find remedies for patients in Asclepius.

Bergama makes for a busy yet exciting day for tourists. It is one of the most recommended sites to visit in Turkey today.

*Museum Pass is valid at all the sites mentioned above.