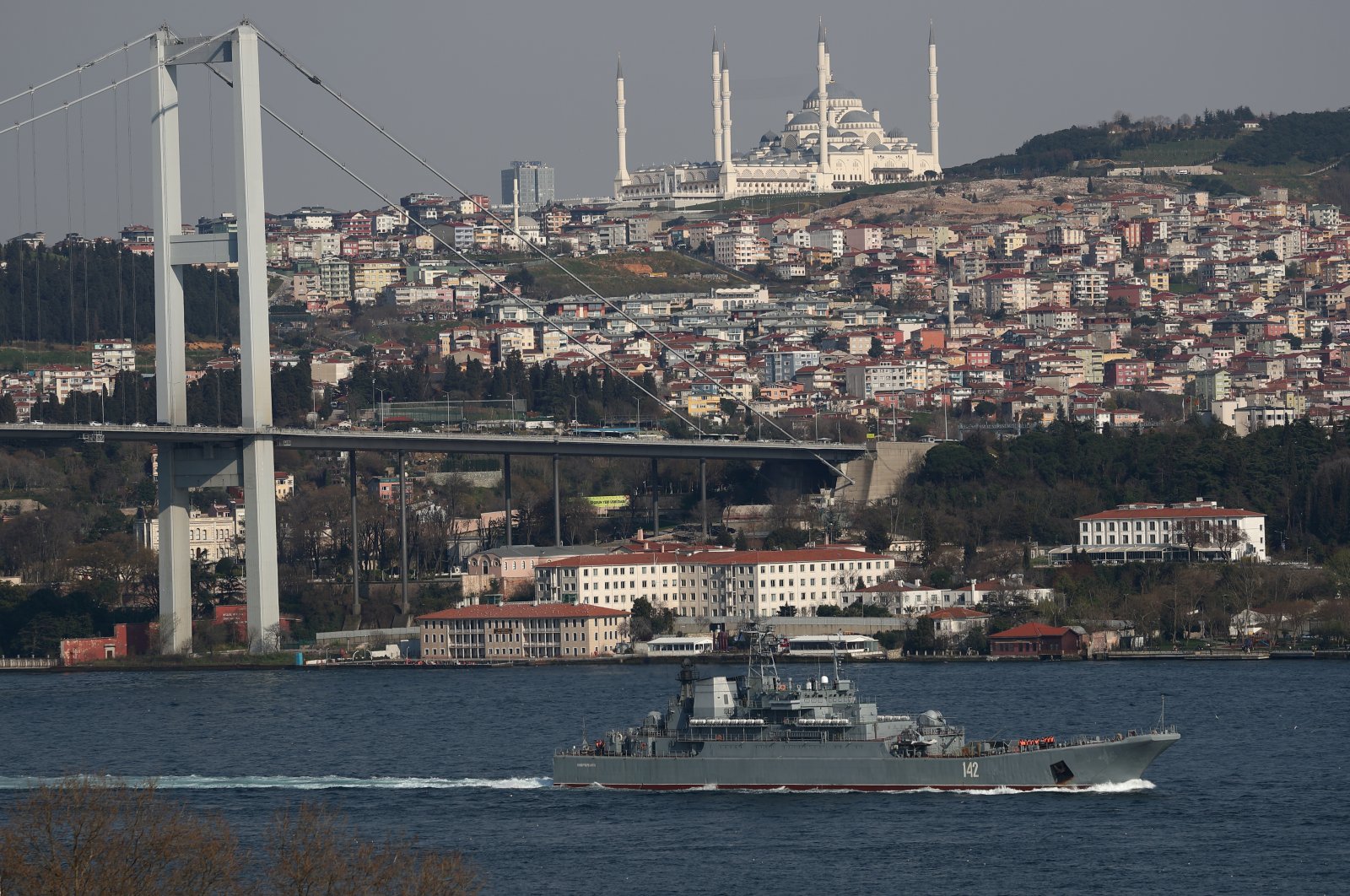 The Russian Navy's large landing ship Novocherkassk sets sail in the Bosporus on its way to the Mediterranean Sea, in Istanbul, Turkey, April 12, 2021. (Reuters Photo)
by Burhanettin Duran Apr 15, 2021 12:05 am
RECOMMENDED

The European Union’s leaders are still preoccupied with the "protocol crisis" they conjured up last week, as Turkey launches a diplomatic offensive.

In recent days, President Recep Tayyip Erdoğan spoke by phone with Russian President Vladimir Putin before hosting his Ukrainian counterpart Volodymyr Zelenskiy to mark the 10th anniversary of Ankara and Kyiv’s strategic partnership. Turkey’s message to both leaders was that it favored a diplomatic solution to the Donbass conflict.

On April 12, Libyan Prime Minister Abdul Hamid Dbeibah attended a meeting of the Turkey-Libya High Level Strategic Cooperation Council in the capital Ankara, along with five deputy prime ministers, 14 Cabinet ministers and Turkey's top military commander. The large Libyan delegation’s visit signaled that Tripoli attached special importance to its relations with the Turks at a time when European leaders continue to frequent the Libyan capital.

Tensions are still running high between Russia and Ukraine, with both sides accusing the other of engaging in acts of provocation and resorting to populism to score political points at home.

The United States recently decided to deploy two warships to the Black Sea, whereas the rest of the West continues to urge Moscow to withdraw its troops from the Ukrainian border. Turkey, which works closely with both countries in a range of areas, from trade to defense, stepped in to defuse the situation. In fact, Erdoğan has successfully managed those challenging relationships since 2014.

On April 10, Erdoğan reiterated that his country did not recognize the annexation of Crimea while committing to Ukraine’s territorial integrity and highlighting the deepening ties between the Turkish and Ukrainian defense industries.

At the same time, Erdoğan noted that Ankara’s engagement with Kyiv was “not an initiative against third parties.” It is clear, nonetheless, that Russia is not overjoyed by Turkey’s decision to sell armed drones to Ukraine.

Erdoğan will continue to conduct leader-to-leader diplomacy in an attempt to de-escalate tensions in the Black Sea. Putin, however, has the final say when it comes to de-escalation.

To start taking U.S. President Joe Biden’s threats seriously, the Russian president first must see a strong reaction from the United States and the European Union.

Let us remember that Moscow’s takeaway from Georgia in 2008 and Crimea in 2014 was that Washington and Brussels didn’t have what it took to deter Russia. In my opinion, Putin intends to further escalate in order to get Biden to negotiate terms. He seems to believe that Washington cannot take on Beijing and Moscow at the same time.

Dbeibah, in contrast, quietly follows an effective balance-of-power policy. His government engages with those countries, which effectively destabilized Libya in the past, and signals that Turkey, which restored order under a 2019 agreement, deserves special treatment.

The Libyan prime minister also understands that the removal of the Turkish military from his country will put its political future at risk – especially since putschist Gen. Khalifa Haftar is still talking about building new cities “to accommodate 12 million people.”

Side factors in Libya

At this time, Italy and France want to lead Libya’s reconstruction, whereas Greece looks to scrap the Turkish-Libyan agreement on maritime delimitation. Egypt, in turn, wants to curb the Turkish influence in cooperation with Tunisia.

Those countries, however, did not contribute to the process that resulted in the interim government’s formation. Some of them actively backed Haftar’s coup attempt. Others, like Italy, watched from the sidelines. They are united, however, in their wish to remove Turkey from the equation.

Dbeibah, originally a businessperson, in contrast, wants a win-win relationship with all relevant parties. If his plan succeeds, Libya’s current leader may run for office in December 2021 and govern the country with a long-term perspective. Needless to say, Ankara plays a key role in that equilibrium.

Finally, Egypt has been responding to Turkey’s offer to repair their bilateral relations. Egyptian Foreign Minister Sameh Shoukry recently said that Cairo was inclined to start a mutually beneficial dialogue and build a relationship in line with international law.

Prime Minister Mostafa Madbouly recently thanked Erdoğan for Turkey’s efforts during the D-8’s rotating presidency. The rapprochement will take time and involve some level of competition.

Turkey and Egypt, which see eye to eye on maritime delimitation in the Eastern Mediterranean, will remain on opposite sides in Libya. Among other things, Cairo is trying to convince the Tunisians to oppose the Turkish presence in al-Watiya air base. Moving forward, competition and rapprochement will seemingly go hand in hand.