The Zionist and Hindutva playbook: Shoot then cry 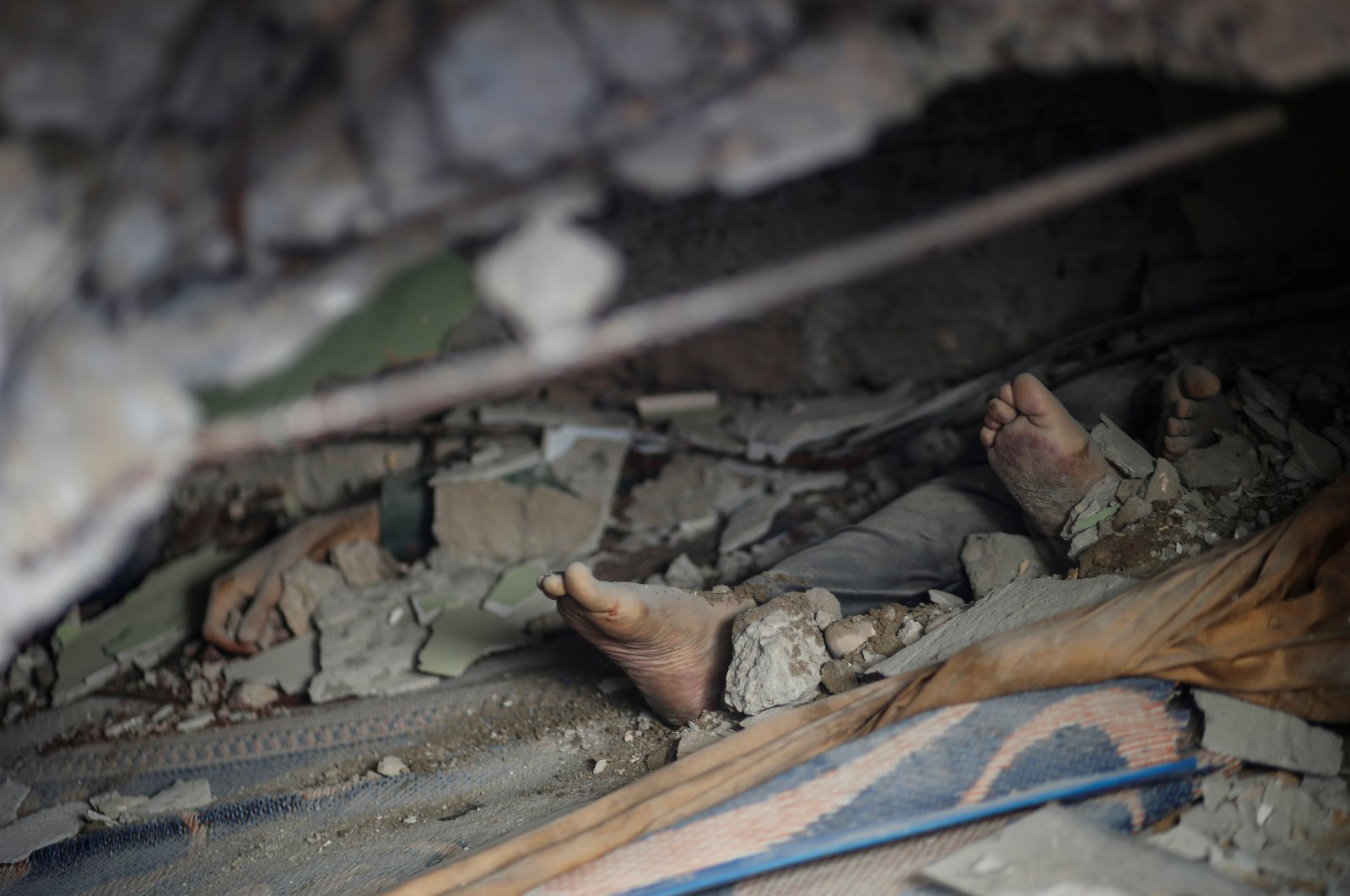 The bodies of victims killed by deadly Israeli bombardments are seen amid rubble in Gaza City, Palestine, May 16, 2021. (Reuters Photo)
by Farhan Mujahid Chak May 22, 2021 12:05 am
RECOMMENDED

The grotesque scenes of violence being inflicted on the Palestinians are heart-wrenching. “There were four,” screamed a distraught Palestinian father who lost all his children in an Israeli missile attack targeting civilian apartment buildings in Gaza.

This ongoing monstrosity only grows more appalling with media outlets like the BBC, CNN and France24, aiding and abetting the structures of power and narratives that dehumanize Palestinians.

And, just as ugly, are the ways in which they obfuscate reality and peddle falsehoods to paint Israel as the victim.

“This was a struggle,” he wailed, “of law and those that disregard it.” What makes this even more incredulous is that he speaks of law while violating the Geneva Conventions and the Charter of the United Nations.

Unsurprisingly, the Narendra Modi-led Hindu nationalist Bharatiya Janata Party (BJP) government in India has wholeheartedly supported the Israeli assault on Palestinians as BJP Islamophobes describe Kashmir and Palestine as front lines in the war against Islam.

It's been a difficult night for us, exhausted after spending hours in bomb shelters, but waking up to so many messages of support from you guys helps.

In fact, the parallels between Hindutva, the predominant form of Hindu Nationalism, in Kashmir and Zionism in occupied Palestine are plenty. Yet, the most disingenuous and carefully orchestrated strategy both fanaticisms deploy is to pursue the contradictory, irreconcilable policy of seeking sympathy from abroad while recklessly endangering the lives of the people under their occupations.

This duplicitous policy has been described in Hebrew as "yorim ve bochim" or "shooting and crying."

It is operationalized in Israel by right-wing settlers and in India by murderous, far-right paramilitary Rashtriya Swayamsevak Sangh (RSS) thugs.

Both aim to pulverize Palestinians and Kashmiris, then bemoan their suffering and say "we gave them a chance for peace, if only they took it."

Nowhere is this hypocrisy more clear than in the unprovoked, brazen Israeli attack on Palestinian worshippers while in prayer that started the entire new crisis and in India as it weaponizes the pandemic to recklessly endanger Kashmiris by limiting medical supplies and encouraging mass Hindu pilgrimage.

Firstly, Modi's interpretation of the "shooting and crying" policy entails the emotional weaponization of sympathy for India, especially during the current catastrophic COVID-19 outbreak, to wreak havoc on Kashmiri life and liberty by facilitating the spread of the pandemic.

Prior to this, the emergence of the pandemic provided Modi with the cover he needed to impose a lockdown within a lockdown.

Now, with the escalating COVID-19 cases in Indian-occupied Kashmir, the BJP-led Indian government is planning on holding the Amarnath Yatra Hindu pilgrimage.

Imagine that? At a time when at least three deaths occur a minute, India wishes to facilitate a massive superspreader event while knowing full well the role the religious Kumbh Mela festival played in exacerbating India’s pandemic woes.

It is not without reason the respected medical journal The Lancet has condemned Modi’s pandemic response.

Despite the apocalyptic coronavirus ravaging India, the Indian government has stated that the pilgrimage will take place as scheduled from June 28 through Aug. 22, 2021.

Unquestionably, facilitating Hindu devotees to visit the Amarnath cave shrine, perched 3,880 meters (12,730 feet) above sea level in the Himalayas, will result in a devastating wave of the coronavirus in Kashmir, which already has severely under-equipped health care facilities.

This Amarnath Yatra needs to be immediately stopped and the Indian government must be compelled to prevent this crime against humanity from occurring.

The consequences of such actions will lead to grave breaches of the Third and Fourth Geneva Conventions including inhumane treatment and willfully causing great suffering or serious bodily injury.

By allowing the Amarnath Yatra Hindu pilgrimage, the Modi government aims to weaponize the pandemic, recklessly endanger lives and further entrench the military occupation of the disputed territory to enforce homogenization.

What could be more catastrophic than facilitating a superspreader event in the disputed territory of Kashmir?

Secondly, in occupied East Jerusalem, the West Bank and the Gaza Strip, Netanyahu's "shooting and crying" strategy is being operationalized as never before.

The current state of affairs arose when Palestinian worshippers in Al-Aqsa Mosque were brazenly attacked while in the midst of their morning prayers.

Western media outlets and Israeli apologists who deflect the focus on Hamas and its crude, retaliatory strikes against Israeli cities have managed to almost entirely lose the truth of the situation.

In total, in the occupied Palestinian territories, there have been more than 230 deaths. Over 75,000 Palestinians are displaced due to the bombings, as the U.N. reported.

Palestinians are being pummeled because they dare to resist and then cursed for doing so. The tyrant hates nothing more than the resistance of the oppressed that exposes his cruelty to the world.

Despite international calls for an immediate halt of all hostilities, including from U.N. Secretary-General Antonio Guterres, Netanyahu pledged the offensive will continue as he “needed to restore calm in the state of Israel.”

This is eerily familiar to what Israel's former Prime Minister Golda Meir once scathingly wrote on why Israelis “can never forgive the Arabs for forcing our children to learn to kill their children.”

Finally, after 11 days of grotesque bombardment, Israel has capitulated and agreed to a cease-fire.

In the killing fields of occupied Palestine and Kashmir, a tragic lesson is being learned that bodes ill for the future of our globalized world.

Terror begets the same. If the brazen war crimes being committed, dispossession, land appropriation or outright murder are not enough to compel the international community to act, then others will.

These last 11 days of hideous violence upon the Palestinian people should serve as an eye-opener. As South Africa's late former President Nelson Mandela, who is a symbolic name in the fight against the apartheid system, wisely wrote: “when a man is denied the right to live the life he believes in, he has no choice but to become an outlaw.”