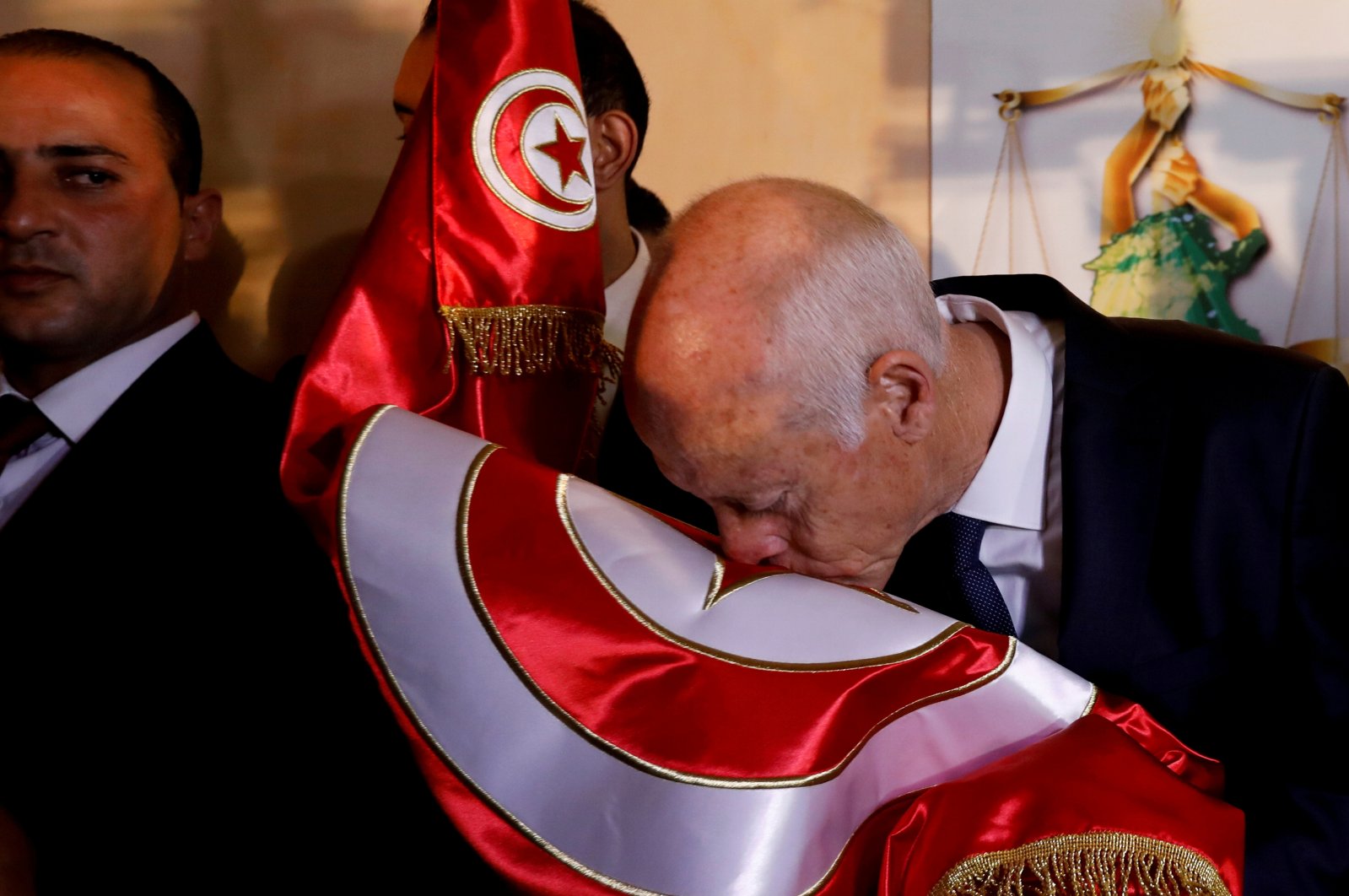 Tunisian President Kais Saied reacts after exit poll results were announced in a second round runoff of the presidential election in Tunis, Tunisia, Oct. 13, 2019. (REUTERS Photo)
by Abdennour Toumi Aug 24, 2021 12:05 am

Tunisian President Kais Saied has followed in the footprints of France's General de Gaulle since the soft coup on July 25. Ennahdha, however, has not used its final card yet, which could backfire on the president and his supporters in the country and the region

Tunisian President Kais Saied’s decision to take over the county’s constitutional institutions on July 25 has left Tunisia’s short-term political future in limbo. While various ideologies across Tunisia fight, the so-called international community seems busy these days with the return of the Taliban movement to power in Afghanistan. The worthless “war on terror” launched by the neocons in Washington, Western countries and their minions in the region to eradicate political Islam and bring democracy to the Middle East and North Africa (MENA) region is finally coming to an end after two decades.

However, timid moves by U.S. diplomacy in the Maghreb region have become largely rhetorical since 2009, which one could qualify as astigmatism because of the fuzzy situation in Tunisia, as provoked by Saied’s constitutional decisions, and in Libya due to the actions of the capricious putschist Gen. Khalifa Haftar in Benghazi.

Yet, a U.S. diplomatic delegation recently met with Saied in Carthage Palace carrying a written message from President Joe Biden to the Tunisian president. Publicly, U.S. pressure on the Tunisian president continues to emphasize the necessity of appointing a new prime minister and returning to the parliamentary system.

This pressure was not welcomed by the president and his entourage – this was clear in the verbal clashes between the Tunisian presidency's webpage and the White House's statement on social media.

However, the pressure from the U.S. has not produced any concrete effect on the Tunisian president’s July 25 soft coup. Three weeks have already passed, and on Monday Saied said he will extend his power to govern via executive order after passing the 30-day mark on Aug. 25.

This move from the Tunisian president was met with an implicit okay from Washington; the latter, though, has insisted on meeting with Ennahdha leader Rached Ghannouchi, who is also parliament speaker, and called for rapid national government formation.

Nevertheless, there are no positive signs manifested from Carthage Palace that would support the idea of genuine national dialogue breaking through the political crisis. The ball is in Saied's court, but the clock is ticking.

He realizes that there is a sense in the country of rupture with the political elites, which makes his populist discourse stay the course on the one hand and keep pushing for the demonization of Ennahdha and its leader on the other by arguing that they are incompetent and corrupt.

This tactic seems to be working because the leftist elite, the Tunisian General Labour Union (UGTT), the so-called nationalist parties and even the mainstream media are not in favor of the President’s July 25 constitutional coup, at least publically. There were talks about a political road map, and a possible return to legality before the expiration of the president’s time limit of thirty days according to Article 80-3 of the 2014 Constitution.

Saied, as head of state, gradually found himself isolated in the face of an elected parliament. He was annoyed by the parliament's strong prerogatives and became increasingly hostile toward it.

Saied has had a conflict-ridden relation with the parliament, his speaker and to some extent the government as a whole, whose chief was chosen via an extended consensus process in the aftermath of the resignation of Premier Elyes Fakhfakh.

Political analysts and pundits last winter thought that the naming of Hichem Mechichi as prime minister would cool off the tense relationship between the president and the parliament.

But Fakhfakh's July 15, 2020, resignation was the electric spark that drove the president to show more constitutional resiliency, influencing the work of the state's two institutions (the executive and the legislative).

Thus, views on the question of the president’s role in the constitution were raised following the election of Saied in the fall of 2019. He wanted strong executive power, with the prime minister reporting directly to the head of state, while the 2014 constitution leaves only a minor role to the president of the republic.

Saied did, however, capitalize on the poor performance of the two governments that he did cohabit with. Showing a new form of neo-Gaullism in Tunisia, therefore, he embarked on a weighty struggle against the political imperatives of the third republic.

Saied considers the constitution a slow-moving inappropriate framework for resolving the dramatic socioeconomic and health problems that Tunisians are facing following the COVID-19 pandemic crisis. This is an alibi that has echoed well in the anti-Ennahdha political establishment, intellectual elite and among the bourgeois class in Tunisia and abroad.

when the Algeria Liberation War was exerting a considerable impact on France and on its domestic politics.

The issue of the decolonization process became an essential justification for General de Gaulle’s supporters for ending France’s fourth republic and establishing the fifth republic with a new constitution that gave him large constitutional prerogatives and power to govern.

So, the leaders of the main parties of the Fourth Republic decided to appeal to General de Gaulle after having long sought to marginalize him. Yet, the strangest assumption from the ongoing political deadlock in Tunisia is the passive position and statements of the large majority of elite and the naive acceptance of the population in favor of Saied’s July 25 constitutional decisions.

As the days go by, it has become clear that Tunisia is more divided than it was before July 25, and Saied's soft coup has smoothed the path before the country in the way that he wants, not the way Ennahdha wants. Saied continues to appoint loyal figures to high national security and police positions in the state. Most recently, he appointed a regional political loyalist, his former campaign coordinator, as governor of Bizerte.

A new complex layer was added to the blurry political future in Tunisia that has left analysts scratching their heads: The appearance of an odd political movement called the Hashd al-Shaabi (Popular Mobilization Forces - PMF) that is implicitly trying to swallow the political parties and make them irrelevant.

This is a political strategy that Saied is in a position to make a reality. This non-ideological movement has declared its full support of the president’s July 25 constitutional decisions.

This popular movement has sparked much controversy in the country among political parties, the elite and even among the masses, who are raising legitimate questions about the movement's reasons for achieving public presence at this moment. After all, the group's name rhymes with the ongoing sectarian war in Iraq and recalls how the sectarian dimension has destroyed the Iraqi political and social structure.

Unlike Iraq, Tunisia is fully stable in terms of the sectarian and ethnic elements in politics and society. Would Saied take another risk to implement his final project of eradicating political parties and conventional civil society actors that have been challenging his power and aura?

So far, the movement has not gained any political momentum or social reverberation. Nonetheless, such a “spontaneous” political movement could spell an end to political parties and the strong sociopolitical intermediary bodies that have been enriching the political debate in Tunisia for decades, despite their ideological conflicts and political incoherence.

Hence, political elites like the Tunisian intelligentsia are to some extent still traumatized. They are lost in action because of the president’s go-ahead policy, which frightens Tunisians deeply. They are haunted by the ghost of the unknown that could create a long term institutional crisis. Tunisians cannot afford another crisis like COVID-19, which resulted in a high death toll and plunged the country into a dire socioeconomic situation. Tunisians are tired of regional and social inequality.

To sum it up, Saied has wrapped up his fight with Ennahdha and its leader by putting all the blame on it. Ennahdha, however, has not used the final card in its hand yet, which could backfire on the president and his supporters in the country and the region, a situation that would leave Saied to realize, just as General de Gaulle did before him, that the party regime is a mess.