Biden embarks to UK on 1st overseas trip as US president 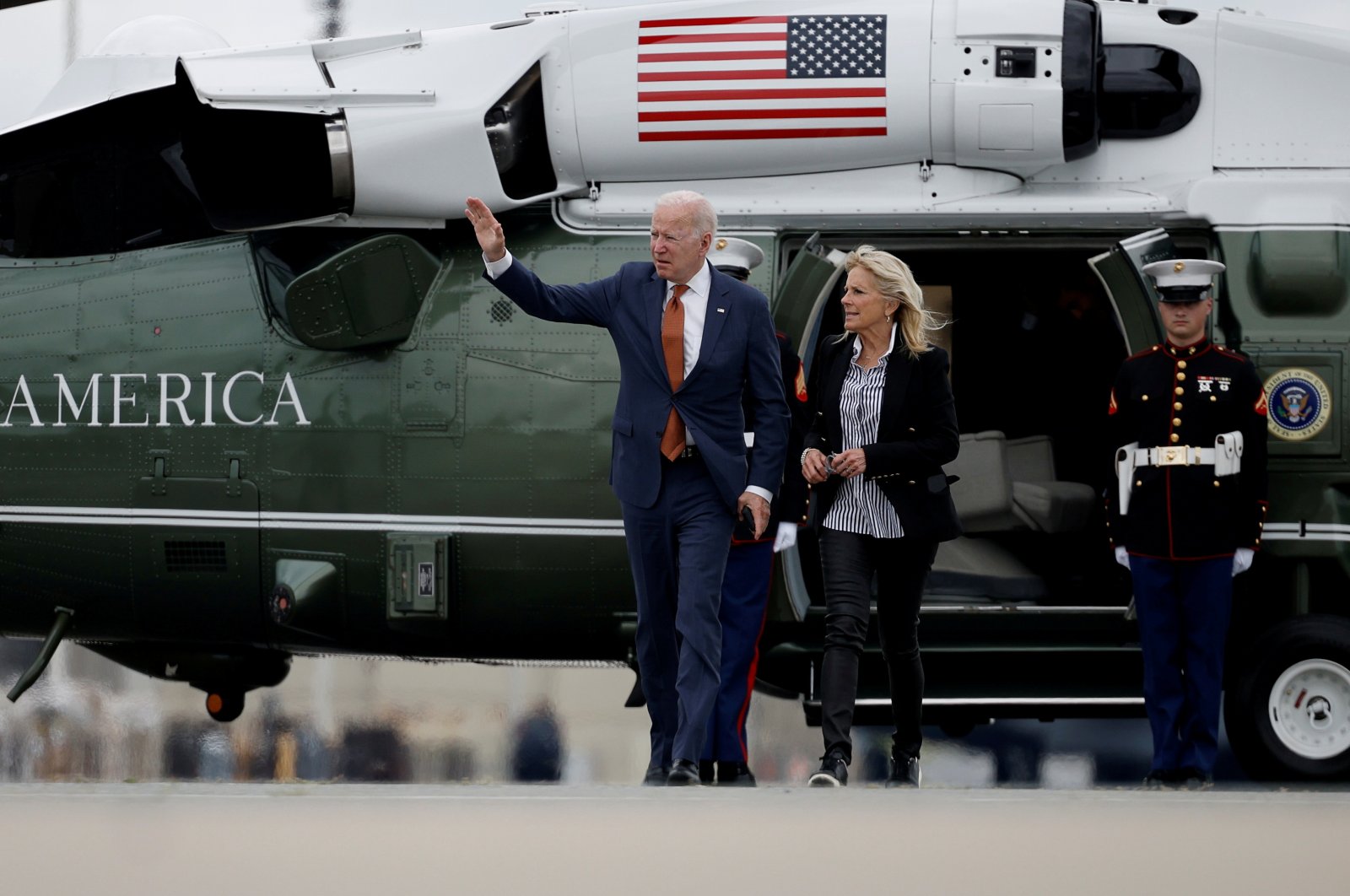 In his first trip abroad since taking office in January, U.S. President Joe Biden will kick off an intense week of summits with G-7, European and NATO partners before a face-to-face with Russian counterpart Vladimir Putin

United States President Joe Biden headed to the United Kingdom early Wednesday on the first foreign trip of his presidency, launching an eight-day mission to rebuild trans-Atlantic ties that were strained during the Trump era. He will meet with President Recep Tayyip Erdoğan there before tense face-to-face talks with Russian President Vladimir Putin.

Biden is eager to reassert the United States on the world stage and steady European allies deeply shaken by his predecessor. Biden has set the stakes for his eight-day trip in sweeping terms, believing that the West must publicly demonstrate it can compete economically with China as the world emerges from the coronavirus pandemic.

Building toward his trip-ending summit with Putin, Biden will aim to reassure European capitals that the United States can once again be counted on as a dependable partner to thwart Moscow’s aggression both on their eastern front and internet battlefields.

The trip will be far more about sending the right message than specific actions or deals. And the paramount priority for Biden is to convince the world that his administration is not just a fleeting deviation in the trajectory of an American foreign policy that many allies fear irrevocably drifted toward a more transactional outlook under former President Donald Trump.

"The trip, at its core, will advance the fundamental thrust of Joe Biden’s foreign policy to rally the world’s democracies to tackle the great challenges of our time,” said National Security Adviser Jake Sullivan.

Biden’s to-do list is ambitious. In their face-to-face sit-down in Geneva, Biden wants to privately pressure Putin to end a myriad provocations, including cybersecurity attacks on U.S. businesses by Russian-based hackers, the jailing of opposition leader Alexei Navalny and repeated overt and covert efforts by the Kremlin to interfere in U.S. elections. Biden is also looking to rally allies on their COVID-19 response and to urge them to coalesce around a strategy to check emerging economic and national security competitor China even as the U.S. expresses concern about Europe's economic links to Moscow.

He also wants to nudge outlying allies, including Australia, to make more aggressive commitments to the worldwide effort to curb global warming.

The week-plus journey is a big moment for Biden, who traveled the world for decades as vice president and as chair of the Senate Foreign Relations Committee, and will now step off Air Force One on international soil as commander in chief. He will face world leaders still grappling with the virus and rattled by four years of Trump’s inward-looking foreign policy and moves that strained longtime alliances as the former president made overtures to strongmen.

"In this moment of global uncertainty, as the world still grapples with a once-in-a-century pandemic,” Biden wrote in a Washington Post op-ed previewing his diplomatic efforts, "this trip is about realizing America’s renewed commitment to our allies and partners, and demonstrating the capacity of democracies to both meet the challenges and deter the threats of this new age."

The president first travels to Britain for a summit of G-7 leaders and then to Brussels for a NATO summit and a meeting with the heads of the European Union. It comes at a moment when Europeans have diminished expectations for what they can expect of U.S. leadership on the foreign stage.

Central and Eastern Europeans are desperately hoping to bind the U.S. more tightly to their security. Germany is looking to see the U.S. troop presence maintained there so it doesn’t need to build up its own. France, meanwhile, has taken the tack that the U.S. can’t be trusted as it once was and that the EU must pursue greater strategic autonomy going forward.

"I think the concern is real that the Trumpian tendencies in the U.S. could return full bore in the midterms or in the next presidential election,” said Alexander Vershbow, a former U.S. diplomat and once deputy secretary-general of NATO.

The sequencing of the trip is deliberate: Biden consulting with Western European allies for much of the week as a show of unity before his summit with Putin. His first stop late Wednesday will be an address to U.S. troops stationed in Britain, and the next day he sits down with British Prime Minister Boris Johnson. The two men will meet a day ahead of the G-7 summit to be held above the craggy cliffs of Cornwall overlooking the Atlantic Ocean.

The most tactile of politicians, Biden has grown frustrated by the diplomacy-via-Zoom dynamics of the pandemic and has relished the ability to again have face-to-face meetings that allow him to size up and connect with world leaders. While Biden himself is a veteran statesman, many of the world leaders he will see in England, including Johnson and French President Emmanuel Macron, took office after Biden left the vice presidency. Another, Germany’s Angela Merkel, will leave office later this year.

There are several potential areas of tension.

On climate change, the U.S. is aiming to regain its credibility after Trump pulled the country back from the fight against global warming. Biden could also feel pressure on trade, an issue to which he's yet to give much attention. And with the U.S. well supplied with COVID-19 vaccines yet struggling to persuade some of its own citizens to use it, leaders whose inoculation campaigns have been slower will surely pressure Biden to share more surplus around the globe.

Another central focus will be China. Biden and the other G-7 leaders will announce an infrastructure financing program for developing countries that is meant to compete directly with Beijing’s Belt-and-Road Initiative (BRI). But not every European power has viewed China in as harsh a light as Biden, who has painted the rivalry with the techno-security state as the defining competition for the 21st century.

The EU has avoided taking as strong a stance on Beijing’s crackdown on Hong Kong’s democracy movement or treatment of Uyghur Muslims and other ethnic minorities in the western Xinjiang province as the Biden administration may like. But there are signs that Europe is willing to put greater scrutiny on Beijing.

The EU in March announced sanctions targeting four Chinese officials involved with human rights abuses in Xinjiang. Beijing, in turn, responded by imposing sanctions on several members of the European Parliament and other Europeans critical of the Chinese Communist Party.

Biden is also scheduled to meet with Turkey's Erdoğan while in Brussels, a face-to-face meeting between two leaders who have had many fraught moments in their relationship over the years. They held their first call in April, four months after Biden was inaugurated, during which the U.S. president informed the Turkish leader that he would formally recognize the killings of Ottoman Armenians during World War I as "genocide," becoming the first U.S. president to use the controversial term. The Turkish government and opposition parties have also stood united against Biden’s move. One of the strongest reactions in Turkey came from Armenian Patriarch Şahak Maşalyan, who slammed the use of the 1915 events as a political tool.

Earlier in June, White House Spokesperson Jen Psaki said that during the meeting the two leaders will discuss regional and bilateral ties. Sullivan said Monday that Biden is looking forward to reviewing the "full breadth" of Ankara-Washington ties, underlining that they will also look at the "significant differences" between the two NATO allies.

"President Biden knows Erdoğan very well. The two men have spent a good amount of time together and they're both, I think, looking forward to the opportunity to really have a business-like opportunity to review the full breadth of the relationship," Sullivan said during White House briefing.

Ankara and Washington in recent years have disagreed on a number of issues that have further strained bilateral ties. These range from Turkey’s purchase of Russian S-400 air defense systems to U.S. support for the Syrian branch of PKK, the YPG, as well as the U.S.' refusal to extradite Fetullah Gülen, leader of the Gülenist Terror Group (FETÖ).

The trip finale will be Biden's meeting with Putin. Biden has taken a very different approach to Russia than Trump's friendly outreach. Their sole summit, held in July 2018 in Helsinki, was marked by Trump’s refusal to side with U.S. intelligence agencies over Putin’s denials of Russian interference in the election two years earlier. Biden could well be challenged by unrest at home as Russia looks to exploit the Jan. 6 Capitol insurrection and the debate over voting rights to undermine the U.S. position as a global role model.

The U.S. president, in turn, is expected to push Russia to quell its global meddling. "By and large, these are not meetings on outcomes, these are 'get to know you again' meetings for the U.S. and Europe,” said Richard Haass, president of the Council on Foreign Relations. "It's about delivering a message to Putin, to reviving old alliances and to demonstrate again that the U.S. is back on the right course.”