Terror and war crimes: What West left for Afghanistan 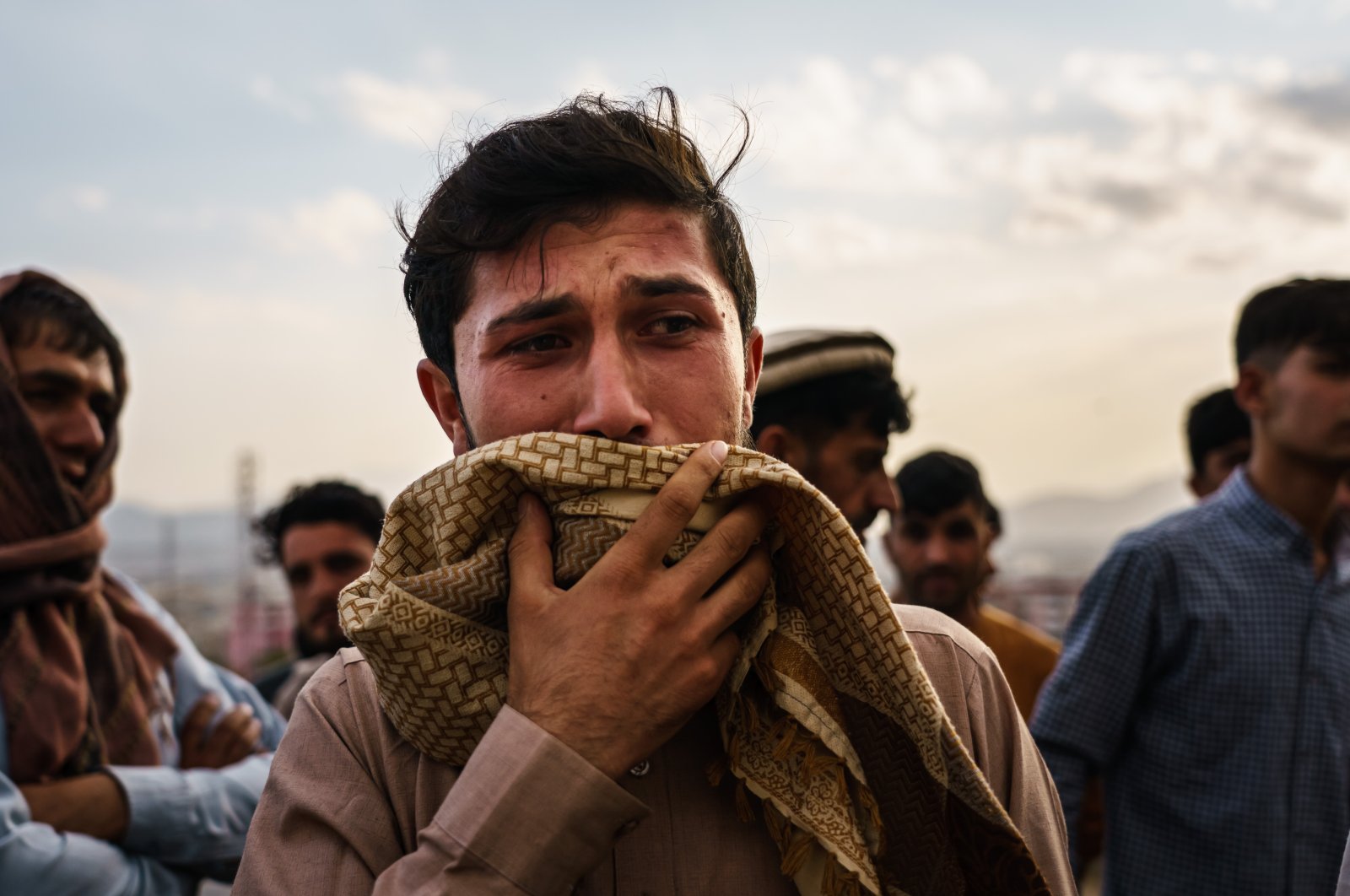 While the Western powers loudly proclaim that the "war on terror" against organizations and regimes they identify as terrorists helps create a more peaceful and secure world, no operation has been launched to hold the leaders of the world's major powers accountable for the illegal, brutal bombing campaigns and atrocities conducted by their armed forces against civilians in Afghanistan and beyond

It has been more than a month since the Taliban took over Afghanistan, forcing the whole world to talk about the various failures of the former Afghan government, which was supposed to create the political, economic and social basis for a new country without a foreign presence and with democracy and secularism prevailing. But with the escape of Afghan President Ashraf Ghani and the power shift, hopes for an advanced state have dissipated, and even worse, fear of losing hard-won gains such as the human rights of freedom of expression, women's right to education and their right to work has gripped many Afghans at home and beyond.

While Western countries were blaming the former president for his retreat, with United States President Joe Biden accusing the defunct Afghan government of misleading Washington into thinking that its security forces would be able to fight the Taliban, the deferred folder with the war crimes carried out by foreign troops in Afghanistan for decades once again was swiftly hidden in a dark, deep cabinet.

As Ghani forced his way into the United Arab Emirates (UAE), from where the former leader apologized for leaving Afghans one-on-one with the looming humanitarian crisis, the threat from terrorism, wrecking the economy and new rulers with their own political and ideological philosophy – a philosophy far from many citizens who lived alongside foreigners for the last 20 years, soaking up Western culture and lifestyle, many global leaders who have been accustomed to covering up their crimes slammed Ghani. Although he expressed regret that he “could not make it end differently.” Meanwhile, top U.S. officials have accused the Afghan military of giving up the lever of power into the hands of the Taliban without a fight.

The Taliban's seizure of power was followed by days of chaos and panic as foreign troops rushed to evacuate their personnel. Desperate Afghans, who had lost faith in the West, climbed onto departing planes like a drowning man clutching at straws, creating horrific footage depicting people falling from aircraft. While the media fed its viewers with dreadful images from Afghanistan’s capital, another shock resonated after Daesh-affiliated twin suicide bombings hit Kabul Hamid Karzai International Airport, killing at least 175 people and prompting U.S.-led drone attacks that caused casualties among Afghan citizens.

Despite receiving warnings about a very likely attack on the airport, Western countries failed to provide the necessary security around the hot spot and, as many times before, chose to “condemn” terrorist groups and pledged revenge. However, the burden of reckoning fell on the shoulders of the civilian population, which continues to pay for the mistakes of Western leaders.

The pointless war in Afghanistan was followed by al-Qaida’s attack on New York’s World Trade Center on 9/11. Some 3,000 Americans were killed in the attack, and the White House led by then-President George W. Bush launched a search for the leader of the terrorist group, Osama bin Laden. Even as Biden argued that America's purpose for military entrance in Afghanistan was to hunt down al-Qaida’s head and not nation-building, this is not what occured in practice.

The main purpose that drove the U.S. into Afghanistan for a long 20 years was fear, says Robert Kagan, a senior fellow at the Brookings Institution.

“Imperial hubris led America to believe that we could shape the world in our image using our guns and our money,” he said in an article for the Washington Post. “For better or for worse, it was fear that drove the United States into Afghanistan.”

Fear, imperialism, nation-building – there may be many reasons, maybe all at once, for the U.S. intervention in Afghanistan. What is certain is that American officials prioritized their political preferences over what they could realistically achieve.

“If the goal was to rebuild and leave a country that could sustain itself and pose little threat to U.S. national security interests, the overall picture is bleak,” Special Inspector General for Afghanistan Reconstruction (SIGAR) John Sopko said earlier in August. “U.S. officials created explicit timelines in the mistaken belief that a decision in Washington could transform the calculus of complex Afghan institutions, power brokers and communities contested by the Taliban.”

Sopko asserted that the U.S. government did not understand the Afghan context and therefore failed to tailor its efforts accordingly. “Ignorance of prevailing social, cultural and political contexts in Afghanistan has been a significant contributing factor to failures at the strategic, operational and tactical levels,” Sopko added.

Human rights lawyer and director of the United Kingdom charity 3DC Clive Stanfford Smith said, “Every time the U.S. takes up arms, we advertise our purpose as the promotion of democracy.”

But the “promotion of democracy” costs money and human lives. Over $2.3 trillion has been spent to date, including Department of Defense spending. It also includes an increase in the military budget of the Pentagon base due to the fighting, expenses of the State Department on the reconstruction and democratization of Afghanistan as well as training of its armed forces. Interest on loans to pay for the war and expenses on veterans in the Veterans Affairs system could also be included in the list. Trillions more will be added for future medical care of all post-9/11 war veterans. According to Harvard University scholar Linda Bilmes, the U.S. government will have to shell out more than $2 trillion for Iraqi and Afghan war veterans from now until 2050. The White House estimated that the U.S. has spent $300 million a day for 20 years in Afghanistan.

As for human lives, Washington officials could not provide the exact number of Afghan civilians killed in U.S. drone strikes.

According to civilian harm monitoring group Airwars, since the 9/11 terrorist attacks, American drones and airstrikes have killed more than 22,000 civilians across the world, and the number is believed to be as high as 48,000. Based on the U.S. military's own claim of nearly 100,000 airstrikes under the time in the office of four American presidents, namely George W Bush, Barack Obama, Donald Trump and Joe Biden, the analysis was an attempt to estimate the civilian death toll from multiple armed conflicts that included aspects of the “war on terror.” The report found that the U.S. has “declared at least 91,340 strikes across seven major conflict zones,” which could be listed as war occupations of Afghanistan and Iraq, airstrike campaigns against the Daesh terrorist group in Iraq, Syria and Libya as well as U.S. drone and bombing campaigns against militants in Somalia, Yemen Pakistan and Libya.

“Almost all of the reported civilian deaths from U.S. wars since Sept. 11 (97%) occurred in the two occupations (Iraq 2003-2019, and Afghanistan 2001-2021); as well as in the campaign against the Islamic State in Iraq and Syria (2014-2021),” the report said, using an alternate acronym for Daesh. It also stated that while the “War on Terror was launched by the U.S., some allies initially joined – including European nations that sent significant contingents to Afghanistan.”

In 2020 the U.K. Special Forces, encompassing both the Special Air Service (SAS) and the Special Boat Service (SBS) was accused of adopting a "deliberate policy” of execution-style killings in Afghanistan on the pretext of “self-defense.” The pattern of illegal killings by U.K. Special Forces resonated across the world, with the British government facing criticism for covering up war crimes.

"I have no doubt that overall many of the allegations (of innocent people being assassinated) are justified, and that we can conclude that a large number of civilians were killed in night raids, totally unjustifiably,” Philip Alston, the former United Nations special rapporteur on executions, told the BBC Panorama Program in 2019.

Australian military forces also came under fire after a four-year probe by the Australian Defence Force (ADF) asserted that Australian elite soldiers unlawfully killed 39 people during the Afghan war. The 2020 report stated that 19 active or former special forces soldiers should be investigated by the police in connection with the murders of "prisoners, farmers or civilians" during 2009-2013. The ADF said that junior soldiers were forced to carry out their first kill by shooting prisoners, the practice which was commonly known among soldiers as “blooding.” Moreover, Australian forces were placing arms and other items near Afghan bodies to cover up crimes.

The last missile fired by the American forces on Aug. 29, right before its complete withdrawal from a war-torn country, killed 10 civilians, including seven children. The army called it a “righteous strike” as it claimed that the airstrike was seeking to eliminate a terrorist who was planning another attack against troops at Kabul airport. However, the recent investigation by The New York Times put doubts on U.S. official’s version of the events, who said that the Daesh members were carrying explosive substances in the vehicle that led to the second explosion and the civilians’ death. American paradox continued by saying that the U.S. military did not know the suspect’s identity but the man looked suspicious and his activities during the day gave them green light for the drone attack.

After receiving video footage and talking with witnesses, the Times identified the man as Zemari Ahmadi, who had worked for a U.S.-based aid group Nutrition and Education International since 2006. Ahmadi's list of obligations included transportation of colleagues to their homes. He could be seen on videotape loading water canisters into his truck to bring home to his family.

Without a doubt, August 2021 has set new agenda for the entire region and changed foreign policy. However, the pattern of war crimes committed by foreign powers against innocent populations remains unchanged. With the international community still unable to hold the world's major powers and nations accountable, a poor media flow focusing on troop casualties in every armed conflict will unlikely be able to reveal the coverup of Western governments’ massacres of the civilian population in multiple “war on terror” zones.