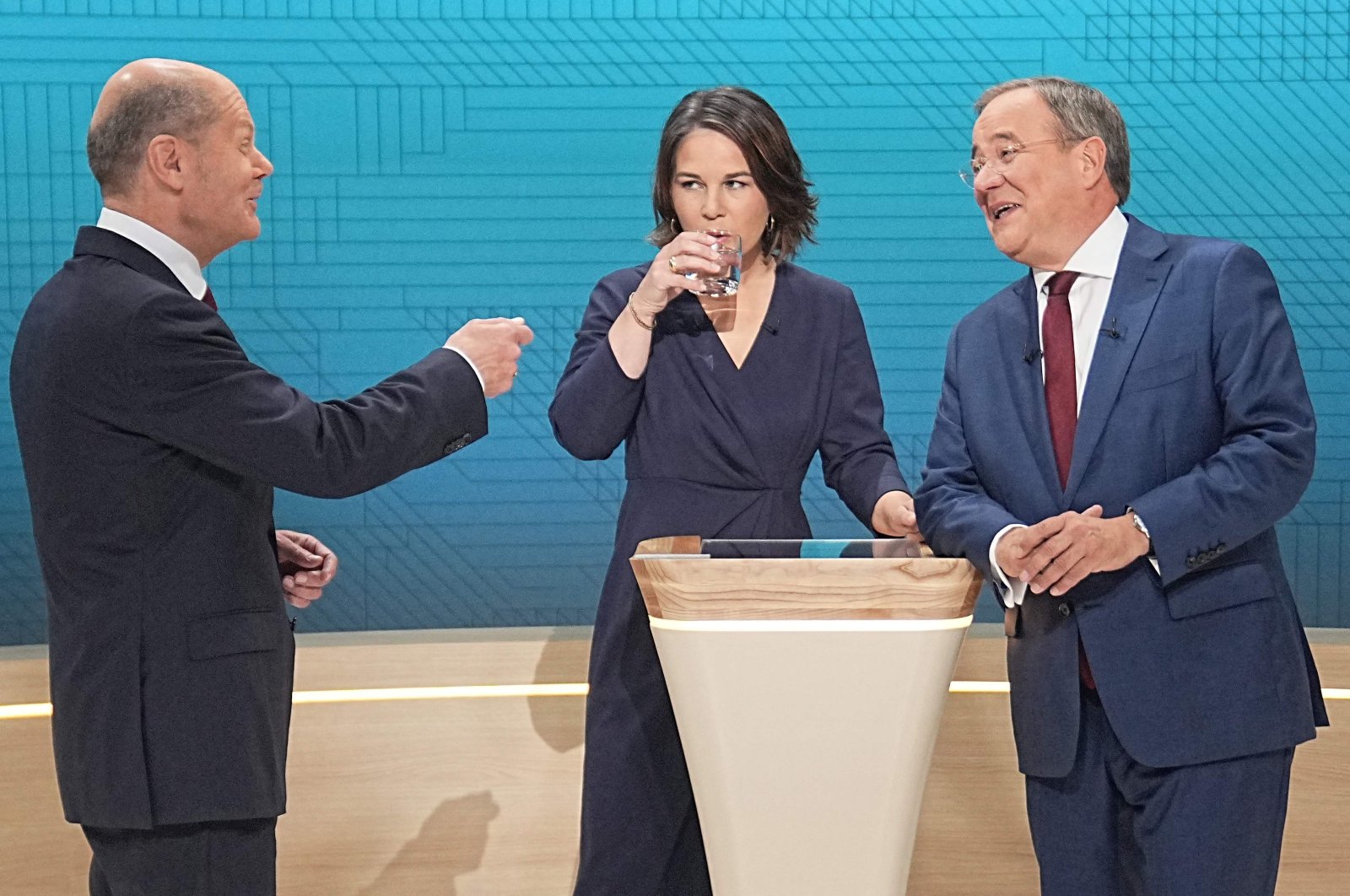 A cooler and confident Olaf Scholz, whose Social Democratic Party of Germany (SPD) leads the polls for the first time in decades, outperformed his main rival Armin Laschet of the Christian Democratic Union (CDU), opinion polls showed after Sunday's crucial televised debate that saw the top three candidates vying for the chancellery in the Sept. 26 elections.

Scholz, currently finance minister, brushed off verbal attacks from Laschet about his record on tackling money laundering and whether he would ally with a far-left party.

A snap poll for ARD television taken soon after the 90-minute debate showed that 41% of those asked thought Scholz was the most convincing performer, compared to 27% for Laschet and 25% for the Greens candidate, Annalena Baerbock.

Laschet accused Scholz of failing in his supervision responsibilities in light of raids last week on the finance and justice ministries that were part of an investigation into the government's anti-money-laundering agency.

"If my finance minister were to work like you, then we would have a serious problem," said Laschet.

An unruffled Scholz, often described as wooden and uncharismatic, cast gaffe-prone Laschet a steely look and accused his opponent of twisting facts and being "dishonest" by suggesting there was a probe of his ministry, whereas investigators simply needed information from it.

Baerbock scored highest on likeability, which was aided by her rivals' unimpressed outlook.

The conservatives are missing the pulling power of Chancellor Angela Merkel, who is not running again after four election victories and 16 years leading Europe's biggest economy. An opinion poll on Sunday showed that the SPD had extended their lead over the conservatives made up of the CDU and the Christian Social Union in Bavaria (CSU).

The INSA poll put the SPD on 26%, up a point from a week ago and at their highest rating since June 2017. The conservatives were unchanged at 20% and the Greens were down 1 point at 15%. In the last three months, the conservatives have lost 8-9 percentage points.

Most experts think a three-way coalition is the most likely outcome of the election – a scenario that could take several months to negotiate, during which time Merkel remains chancellor. After the last elections, it took five and a half months for a government to be formed.

Laschet, the leader of Germany's most populous state North Rhine-Westphalia, is trying to make up for mistakes during the campaign.

In a damaging gaffe, he was caught on camera laughing during a visit to a town hit by lethal floods in July. He apologized. This week's edition of the influential Spiegel magazine has a front-cover picture of Laschet holding his hands in front of his mouth with the headline "Oooops."

In the debate, Laschet also pressed Scholz on whether he would form an alliance with the Greens and the far-left Linke, which opposes NATO and is critical of many aspects of the EU.

Scholz again declined to rule out working with the Linke, arguing first that voters must have their say in the election. However, he made clear that there were clear differences between the parties, which would make a coalition very difficult.

"An acknowledgment of trans-Atlantic relations, NATO and the European Union are necessary for a good government," he said.

Baerbock, whose Greens have also lost around 10 percentage points since highs in April and May, said Germany faced a stark choice between a new start or getting bogged down in "more of the same."

"Germany can do so much more ... This is a big chance for our country," she said.

Some of the liveliest exchanges came during the section on the climate emergency. Scholz and Laschet accused each other's parties of holding back change during their years in government together, either through a lack of investment in clean energy or unnecessary red tape.

Baerbock came out swinging on the Greens' flagship issue, saying both men were more concerned with pointing fingers than finding solutions. She said the next government "will be the last that can still actively influence the climate crisis" and called for Germany to phase out coal by 2030, eight years earlier than the end date set by Merkel's government.

There was more agreement between the candidates on the coronavirus pandemic, with all three urging more Germans to get vaccinated.

Scholz has run an unexciting but error-free campaign. As vice-chancellor and guardian of the nation's finances, the 63-year-old has positioned himself as the continuity candidate and the natural heir to Merkel's legacy, despite hailing from a different party.

Merkel's decision to retire set up the first election since West Germany's inaugural vote, in 1949, in which there is no incumbent seeking re-election. She has stepped into the arena recently to help boost Laschet's fortunes and visited a flood-hit region with Laschet and used a speech in parliament this week to cast him as the best choice to succeed her, saying he stood for "stability" and "centrism."

Laschet himself has said the election will be fought until polling day, but with record numbers of postal ballots expected because of the pandemic, his fate could be sealed sooner.

Scholz is currently finance minister and vice-chancellor, the latest in a string of top posts that have allowed him to tout his experience. He has a terse, no-nonsense style typical of his home city of Hamburg, where he once worked as a lawyer. He's unflappable and unshakably self-confident, but no master of rhetoric: He once earned the nickname "Scholzomat” for what critics said was a habit of constantly repeating the same phrases regardless of the question.

He served a turbulent stint as the Social Democrats' general secretary in the early 2000s, as then-Chancellor Gerhard Schroder struggled with dissent over welfare-state trims and economic reforms.

Scholz first served in the national government from 2007-2009 as Merkel's labor minister, during the global financial crisis. Germany kept down unemployment, notably by using a government-backed salary support program to keep people on companies' payrolls. The same device served it well during the coronavirus pandemic.

Scholz became Hamburg's mayor in 2011. He hosted the 2017 Group of 20 Summit, remembered largely for widespread rioting by hard-left protesters. Scholz had previously dismissed worries about the event.

The following year, he was elevated to the No. 2 job in Merkel's government after his party reluctantly ditched a pledge to go into opposition. As finance minister, Scholz was a driving force behind moves to place a global minimum tax of at least 15% on large companies and led efforts to cushion the pandemic's financial impact. But he also drew criticism over the collapse last year of payment processing company Wirecard.

Scholz ran for the Social Democrats' leadership in 2019 but was spurned by members in favor of a left-leaning duo. Still, the long-struggling party had no hesitation in turning to him as its candidate to succeed Merkel.

By far the youngest contender, Baerbock is also the only one with no government experience. She said when she was nominated: "I stand for renewal, others stand for the status quo.”

Baerbock studied political science and international law in Hamburg and London, and has been a lawmaker in Germany's national parliament since 2013. A successful trampolinist in her youth, she has said that sport taught her "the courage to keep pushing my limits, try new things.”

She and Robert Habeck, who is also on the traditionally left-leaning party's centrist wing, have led the Greens since early 2018. Under the unusually harmonious duo, the party has largely buried its left-right divisions and seen its poll ratings climb. The two leaders decided in March that Baerbock would make its first run for the chancellery.

A native of western Germany, Baerbock has been based for years in the rural eastern state of Brandenburg, where her party entered the regional government in 2019. Baerbock didn't fare well under intense scrutiny early in this year's campaign. She had to correct details in a resume and belatedly declared payments from her party, which she says she wasn’t immediately aware had to be declared, to parliamentary authorities.

A flap followed over allegations that she copied from others in a hastily put-together new book. Baerbock denied any wrongdoing but said she would have done better to use a list of sources.

Laschet has been the governor of North Rhine-Westphalia state, Germany's most populous, since dislodging a center-left regional government in 2017. His supporters often point to that success in a traditional stronghold of the left.

A miner's son, Laschet still lives in his native city of Aachen, on the border with Belgium and the Netherlands. He says that growing up in the heart of the continent made him a convinced European.

He has had an up-and-down political career, joining the German parliament in 1994 but losing his seat in 1998. From 1999-2005, he was a member of the European Parliament, before becoming his state's minister for the integration of immigrants – the first such position in Germany. He won the leadership of his party in North Rhine-Westphalia at the second attempt in 2012.

Laschet is largely a centrist in Merkel's mold, backing her welcoming stance toward refugees and other migrants. Still, he has been keener than the outgoing chancellor to relax restrictions during the pandemic and is treading a fine line between offering continuity and promising renewal.

He won the leadership of Merkel's Christian Democratic Union party in January, beating conservative darling Friedrich Merz in a contest delayed repeatedly by the pandemic. In April, he outmaneuvered Bavarian governor Markus Soder, who had much better poll ratings, to claim the nomination to run for chancellor after a lengthy standoff.

Laschet has a jovial image. He has frequently been seen in Carnival outfits and last year won the "Order Against Brutal Seriousness,” an honor bestowed annually on celebrities who display a sense of humor. But that trait hurt him after deadly floods in his home state in July, when he was seen laughing in the background as Germany's president delivered solemn remarks.