Bored of F-35/S-400 dispute? Turkish defense sector has much to offer 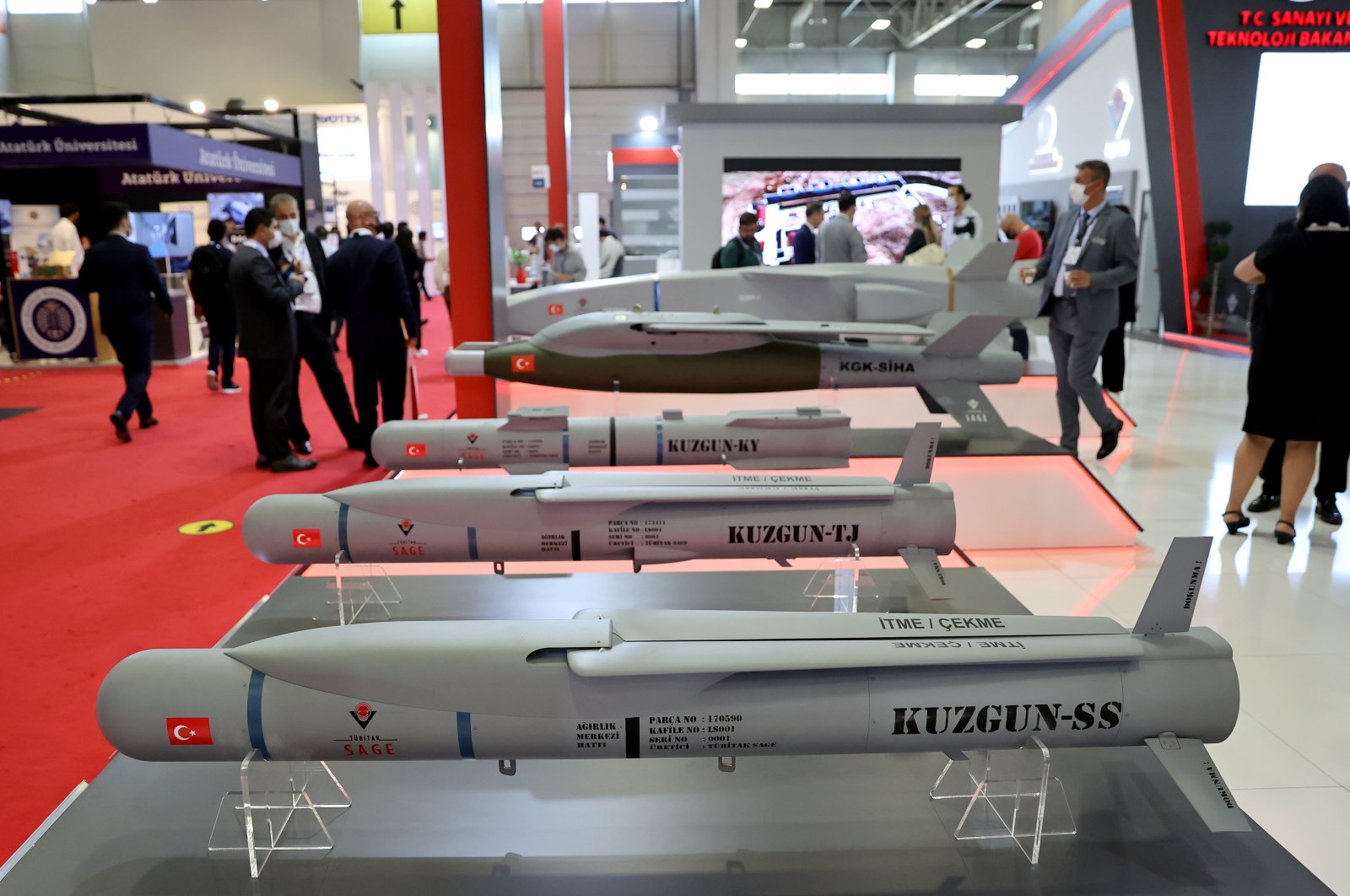 Although it has been occupying the agenda for a long time, Turkey’s expulsion from the next-generation F-35 stealth fighter jet program was nothing new to a nation that had faced several embargoes and sanctions in its near past.

All these just further pushed Turkey to build dozens of its own defense products on its journey to ensure a self-sufficient military, slashing dependency on foreign procurements.

Much has changed over the last decade. Experts have long been dubbing Turkey a country that produces its own, unique defense products – some of which have already been battle-tested. They also see it gaining pace on the path to become a major defense exporter, changing the producer-costumer balance.

The 15th International Defense Fair (IDEF 2021) has been the most recent stage that showcased the latest of what the Turkish defense industry has in its hand, from special-purpose armored vehicles to guided missiles and unmanned platforms.

The fair was organized under the auspices of the Presidency of the Republic of Turkey in coordination with the Turkish National Defense Ministry, the Presidency of Defense Industries (SSB) and the Armed Forces Foundation (TSKGV). It hosted 1,283 companies from 53 countries, attracting 169 delegations, including high-level officials from 83 countries and 76,010 visitors. Some 394 press members also attended the IDEF.

Despite the number of visitors being limited to special interest groups this year to keep the attendees safe amid the COVID-19 pandemic, the number of participant was sustantial, suggesting that the majority of the crowd were interested in products for business purposes.

One of the catchiest item groups of the fair was, to begin with, the unmanned systems and platforms. Besides the leading aviation company Turkish Aerospace Industries (TAI) and drone magnate Baykar’s latest unmanned combat aerial vehicles – both already dubbed as game changers for the course of warfare, particularly after their products' common use in the field – there were several companies who presented their unmanned or autonomous systems.

The vertical takeoff and landing (VTOL) UAV named Çağatay, the only drone in the country with satellite control capability in the under-cloud UAV class, was developed and showcased by Turkish company Uavera.

This particular drone uses an electric motor for vertical takeoff and landing. Thus, it does not require a runway or catapult launcher to take off.

Katmerciler, a leading land vehicle manufacturer, on the other hand, along with its armored vehicles has displayed its Remote-Controlled Weapon Platform (UKAP), which is the first example of its kind in Turkey. The vehicle will be able to serve in "hot" clash zones with remote control functions while contributing to the maximum protection of personnel safety during operations in and outside the city.

The FNSS, another prominent land vehicle manufacturer active in markets abroad, was at the fair with its Gölge Süvari (Shadow Rider) unmanned ground vehicle (UGV) concept, also exhibited at the IDEF 2019. The newest member of the Shadow Rider family is showcased with a 25 mm unmanned remote turret and its autonomous capabilities at IDEF 2021. These particular vehicles are equipped with the autonomy kit developed by the FNSS.

A remotely operated underwater vehicle (ROV), named Kaşif, produced by Armelsan Defense Technologies took the stage at the IDEF 2021 as well. It was initially developed to be used as a drilling observation support vehicle in the country’s current hydrocarbon exploration activities.

Kaşif 1, the first of the new generation hybrid platform that can dive 3,000 meters (9,840 feet), was developed for the drillship Fatih, which made Turkey’s largest-ever natural gas discovery in the Black Sea. The second of the robots, Kaşif 2, was developed for the drillship Kanuni and constitutes 65% of local resources, compared to a 53% share in the first vehicle.

Turkish Ares Shipyard, which has developed the country’s first armored unmanned surface vessel (AUSV), in cooperation with Ankara-based Meteksan Defense Industry Inc., has now rolled up its sleeves to produce an unmanned anti-submarine warfare (ASW) vehicle, again marking a breakthrough for the local defense industry, which was also revealed during the fair.

All the unmanned platforms, either smaller ones developed for civil purposes or the “particularly popular” UCAVs like Bayraktar TB2, which still enjoys the spotlight thanks to its active use on the field in Syria, Libya and Nagorno-Karabakh, were a major indicator that Turkey has no intention of slowing down in this field. It is rather ready to offer the newest solutions to potential customers.

Was the emergence of precision-guided ammunition important for the history of 20th-century warfare? Yes. As a result, there are several types of guided missile systems of local companies for the course of the Turkish defense industry.

The development of this particular torpedo – a next-generation heavy class torpedo that can be launched from submarines against other submarine targets of different classes – started in 2009 under a contract signed between the then-undersecretariat for defense industries, SSB, Roketsan, TÜBITAK and the Turkish Naval Research Center Command (ARMERKOM).

The 7-meter-long, 1.2-ton Akya with a diameter of 533 mm features an active/passive sonar head, while internal guidance is provided via internal and fiber-optic cabling. It makes use of wake guidance against surface targets. It has a range of 15 kilometers (24 miles) at a cruising speed of 40 knots.

Currently ongoing and completed naval projects at the IDEF showed that the country is achieving its ambitious targets by strengthening the navy by leaps and bounds through domestic products.

Along with the displayed ADA-class corvettes, the I-class Istanbul frigate developed in the National Ship (MILGEM) project and the flag-ship-to-be landing helicopter dock (LHD) type amphibious assault ship the TCG Anadolu – which is expected to enter the inventory soon, the TF-2000 Air Defense Warfare (ADW) destroyer was among the most attention-grabbing naval platforms.

The first of the air defense frigates is expected to be included in the navy’s inventory by 2023, in line with a strategy report published in 2015 that aimed at bringing the Turkish Navy to an upper league, from a navy capable of medium-scale regional power transfer to a "Navy with Medium-Scale Global Power Transfer Capability."

Among others, defense giant Aselsan presented visitors the Barbaros class frigates, which are under modernization as part of Mid-Life Upgrade (MLU) contract with SSB. The ASFAT also displayed an offshore patrol vessel, Yonca Onuk Shipyard displayed its assault boat, MRTP51, and the Mechanical and Chemical Industry Corporation (MKE) presented its close air defense system, which aims to equip ships against missiles, bullets, UAVs and helicopters.

The projects are not only for surface warships, quite the contrary. Similar to MILGEM, for which Turkey already has contacts with Pakistan and Ukraine, Ankara in 2019 launched another ambitious program, the MILDEN (National Submarine) program to develop a domestically designed and built submarine.

A total of six air-independent propulsion submarines are to be built and will be delivered gradually to the navy between 2022 and 2027.

There was also a significant change in this year’s participant profile with fewer countries from Europe and more interest from countries like Russia, Ukraine and Pakistan – all three of which could develop defense relations with Ankara, though not on similar basis and levels.

Ukraine has been building a strategic partnership with Turkey, which covers the procurement of Turkish corvettes and UAVs along with Ukraine’s possible engine supply for Turkish helicopters. The country attended the fair with an official delegation as well as more than 25 enterprises – 15 of which are united by the Ukroboronprom exposition, organized by SE Ukrspecexport.

Kyiv has several times expressed its willingness to further develop its relations with Ankara, with particular importance given to the defense and industry.

According to Ukrspecexport CEO Vadym Nozdria, who spoke to Ukrinform, revenues from Turkish contracts amounted to at least 15% of Ukrspecexport's profit last year, which brought more than $30 million.

"If we look at the 2020 statistics, our foreign exchange earnings from foreign economic contracts with Turkish customers take up at least 15%. Of the $230 million, more than $30 million is our activity one way or another concerning Turkey. This is a powerful indicator and, most importantly, in this market, we feel serious prospects for development, as the intensity of our negotiations with Turkish customers is growing,” he was cited by as saying about the fair during an interview. He also added they hope that at the exhibition, “we will be able to consolidate the agreements reached to the level of contracts signed.”