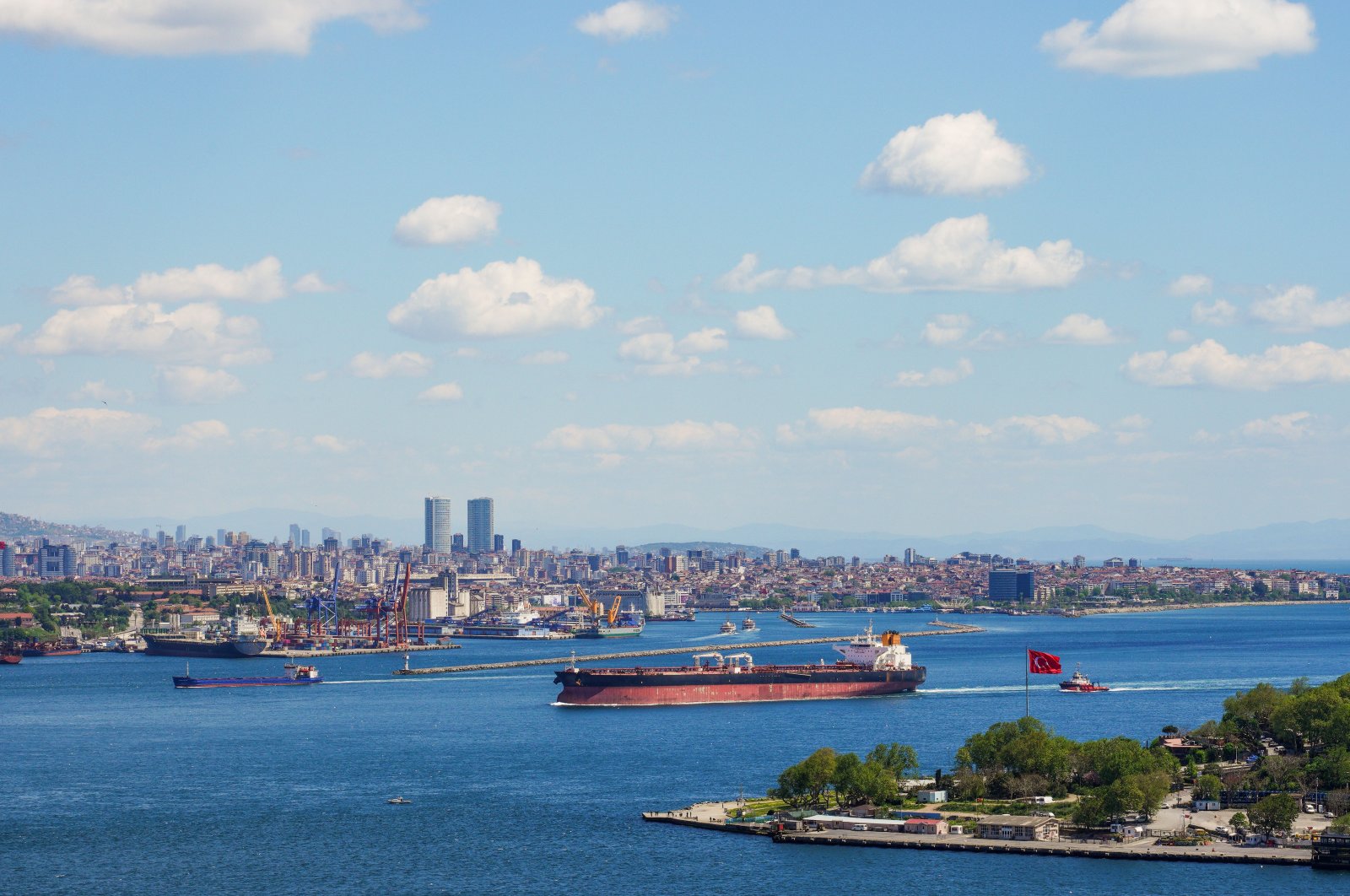 A container ship sails through the Bosporus, Istanbul, Turkey, in this undated photo. (Shutterstock Photo)
by DAILY SABAH WITH AGENCIES
Jun 29, 2021 1:59 pm

Turkey’s economy should grow at a higher-than-expected pace this year, Europe’s development bank said Tuesday, citing a strong rebound from the coronavirus pandemic and signs of tourism picking up.

The European Bank for Reconstruction and Development (EBRD) forecast a better-than-expected economic recovery this year across its geographical regions of investment following pandemic-induced slumps, it said in its latest report.

It said the recovery of 37 countries in its region was gathering steam though tourism and foreign direct investment were still bumpy.

Turkey, the EBRD’s biggest country of operation, saw half a percentage point added to its forecast, expected to now grow at 5.5% this year. The bank said the economy should expand by 4% in 2022.

Turkey was one of only a few countries globally to avoid economic contraction last year when the COVID-19 pandemic struck, largely due to aggressive credit growth.

It expanded 7% year-on-year in the first quarter and the government sees 20% in the second.

The strong growth in the second quarter will largely be thanks to the so-called base effect due to a nearly 10% contraction in the April-June period of 2020.

Roger Kelly, EBRD lead regional economist, said there should be a small quarter-on-quarter contraction in the second quarter.

“Things are picking up again and the picture is reasonably positive, with the macro-economic instabilities that are always there not quite as prominent now,” Kelly said.

“If the tourism season is prolonged with pent-up holiday demand then we could see some upside to the forecast. The Russian tourists are coming back and there are some positive signals coming from Germany and others.”

The 5.5% forecast would return Turkey to its trend over the last two decades. Yet it may fall short, Kelly said, if new COVID-19 variants lead to new lockdowns or if the central bank cuts its 19% policy rate before September.

The Central Bank of the Republic of Turkey (CBRT) kept the key policy rate unchanged for a third meeting this month and adopted a more hawkish tone as a weak Turkish lira and higher global commodity prices continue to cloud the inflation outlook.

The bank reiterated a pledge to keep the rate above inflation in order to cool prices. Inflation unexpectedly dipped below 17% in May, falling from a two-year high.

“Conditions would be in place for easing” in September, Kelly said.

The EBRD, which covers economic trends across Europe, Asia and Africa, expects regionwide growth of 4.2% this year compared to its September forecast of 3.6%, it said in a report.

The bank revealed its revised estimates on the occasion of its 30th annual meeting, which is being held online this week due to the coronavirus pandemic.

“The recovery of the emerging economies in Eastern Europe, Central Asia and North Africa are gathering pace following the COVID-19 pandemic,” the bank said in a statement, which cited the beneficial impact of vaccination.

High global demand for commodities and manufactured goods had provided a boost to some economies in the region, said Beata Javorcik, EBRD chief economist.

“Industrial production is above or has at least caught up with pre-pandemic levels, retail sales have recovered and exports have bounced back,” Javorcik told Reuters.

However, with tourism still in the doldrums and the outlook for leisure travel highly uncertain, countries heavily dependent on the sector – such as Croatia, Georgia, Egypt or Tunisia – still felt the pain, Javorcik added.

Foreign direct investment added to the drag, remaining at around 80% of pre-pandemic levels, the report found.

At a regional level, only the Southern and Eastern Mediterranean suffered a downward revision of growth predictions, with Jordan, Tunisia and Lebanon all seeing their prospects slashed.

Lebanon, which is engulfed in an economic and political crisis, is expected to see its economy contract by 5% in 2021 – the only country to suffer shrinking output out of the 37 covered by the lender.

While the recovery looked broadly on track, economies overall were struggling to return to pre-2020 levels.

“The recovery is taking us parallel to that pre-pandemic trend,” Javorcik said. “In other words: we are not catching up at the moment, and what we are seeing is ... a few points of GDP growth permanently lost.”

The bank, whose shareholders comprise almost 70 countries, was founded in 1991 to help former Soviet bloc countries switch to free-market economies but has since extended its reach.

The institution, which invests alongside the private sector, expects a 3.9% expansion next year.

“The increasing rollout of vaccination programs and improvements in the public health situation have allowed for a gradual withdrawal of social distancing measures and other restrictions,” the bank said.

“As a result, economies have restarted.”

Average activity in the EBRD’s countries of investment shrank by 2.3% last year on chronic fallout from the pandemic.

Yet this marked an improvement from prior guidance of a 3.9% contraction, thanks also to strong exports and fiscal support.

The EBRD Tuesday warned that the outlook remains clouded by uncertainty owing to the highly transmissible delta COVID-19 variant that was first identified in India.

“Huge uncertainty remains with regards to the path of the COVID-19 delta variant which poses particularly large risks for countries that have made less progress on vaccinations and for economies highly reliant on international tourism,” said Javorcik.

Odile Renaud-Basso, a former head of the French Treasury, is overseeing her first EBRD annual meeting after taking the helm in November.

Renaud-Basso said the bank expects 2021 investments to ease off from last year’s record 11 billion euro ($13.1 billion) outlay as big projects slow in the aftermath of the coronavirus crisis.

A resurgence of COVID-19 outbreaks in Western Europe, the Central Balkans and Central Asia in the first half of the year, accompanied by fresh travel restrictions, will affect EBRD’s activity in an otherwise robust economic recovery from the pandemic, she told Reuters.

“We see a bit of slowing down of big investment projects, so a bit of uncertainty ... (and a) wait and see approach from some of our clients,” Renaud-Basso said.

“We expect the level of activity to be not as high as last year, which was exceptional with 11 billion (euros), but to be more in a standard range of 9-10 billion (euros).”

Turkey overtook Egypt to reclaim the top spot as the single biggest recipient country of investments by the EBRD in 2020.

The institution is meanwhile targeting 2025 as the year when more than half its investments will be in green projects.

It is also looking at being fully aligned with the goals of the 2015 Paris climate agreement by the end of next year.

In an effort to help the economies in which it operates to cope with the pandemic, the bank last year focused on providing emergency short-term liquidity, working capital, trade finance and restructuring.

Activity this year was centered on supporting clients through the economic recovery, which is expected to pick up speed in the second half of 2021 as vaccination programs continue and control of the pandemic increases, said Renaud-Basso.

That included more environmentally friendly projects under a drive to make more than 50% of its investments focused on the transition to sustainable and climate-resilient economies by 2025.

The bank may be able to offer greater flexibility with those economies still heavily reliant on fossil fuels provided that they have decarbonization ambitions, Renaud-Basso added.

Poland, for example, receives the bulk of its electricity from carbon-intensive coal and is the only European Union state that has refused to pledge climate neutrality by 2050.

“If this takes place consistently with long-term strategies that are strongly aligned with the Paris Agreement and have a target date for decarbonization and so forth, we may have some flexibility to accommodate these strategies,” she said.