Donbass tension evolves, but to where? 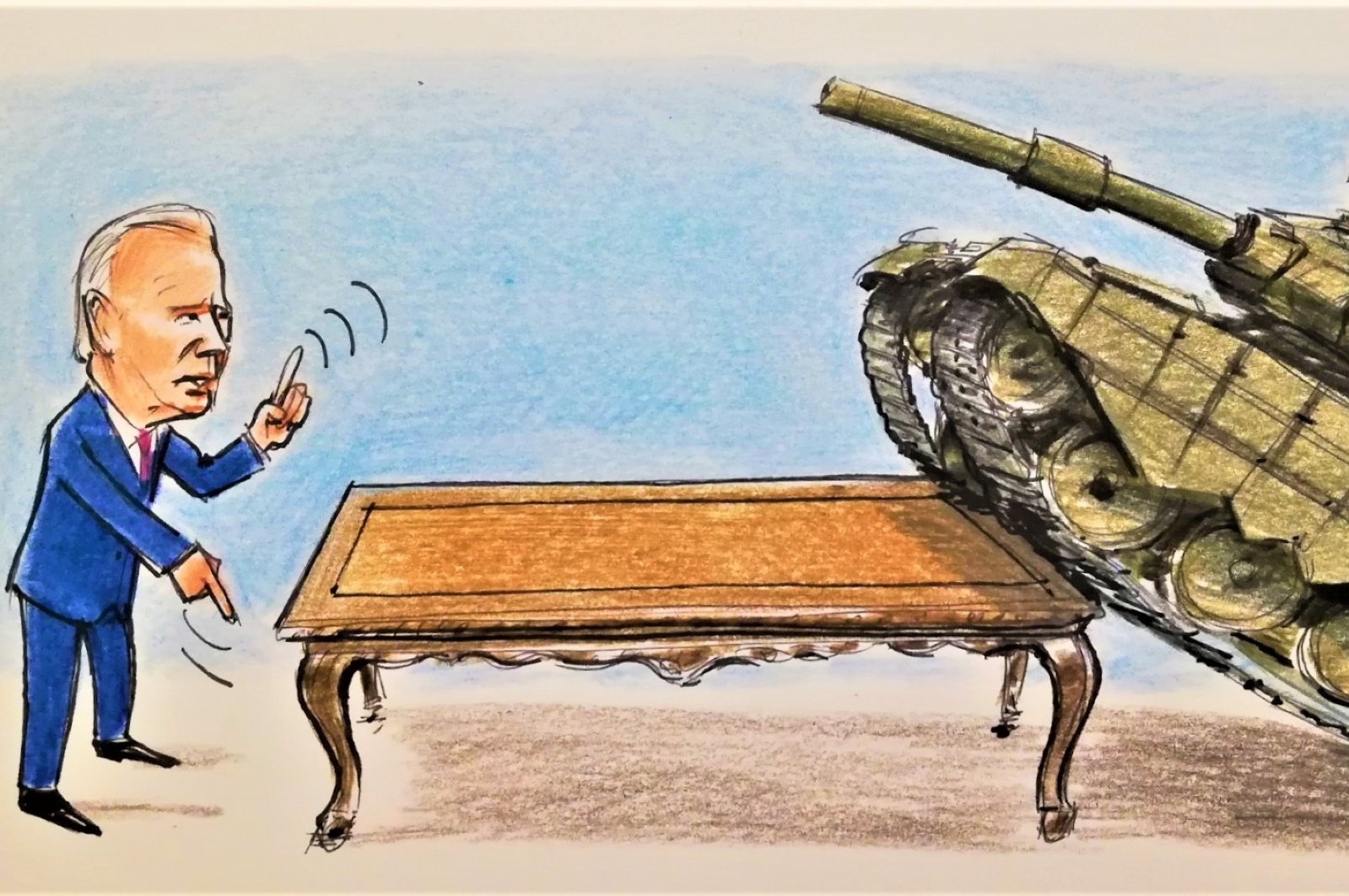 This Illustration by Erhan Yalvaç criticizes Washington and Moscow for escalating the tension over Ukraine.
by Burhanettin Duran Apr 19, 2021 12:05 am
RECOMMENDED

United States President Joe Biden took another step against Russia last week, as Washington imposed fresh sanctions on Moscow over the latter’s alleged meddling in the 2020 presidential election and cyberattacks. Ten Russian diplomats have also been expelled, and eight individuals and entities linked to Crimea’s annexation. Russia pledged to retaliate against those sanctions, but tensions over Ukraine’s Donbass region have de-escalated since Biden spoke with his Russian counterpart, Vladimir Putin, on April 13.

Earlier last week, it was still unclear how the situation would unfold, as tensions grew over Moscow’s deployment of tens of thousands of troops to the Ukrainian border. Experts assessed that Putin, who invaded Crimea in 2014, intended to take another bite out of Ukraine.

At the same time, Kyiv’s request for assistance from NATO raised questions about the possibility of war between the United States and Europe on one side, and Russia on the other.

I maintained that nobody wanted a big war – this was just a ploy by the Russian president to get Biden to start negotiating.

Indeed, the U.S. president was compelled to play the Kremlin’s game: Biden called Putin and proposed a summit meeting in a third country. In an attempt to signal that Washington was negotiating from a position of strength, the White House took fresh measures against Russian officials.

In other words, Biden resumed the escalation in the familiar domain of sanctions. Just last month, his administration had sanctioned some Russian officials and entities over their involvement in the poisoning and arrest of opposition leader Alexei Navalny.

Indeed, the United States relied heavily on sanctions in an attempt to counter Moscow since the Barack Obama presidency. Sanctions, however, are not enough to change Putin’s mind. That’s why tensions over the Donbass region, albeit mitigated, are not over.

The Russian president will keep testing the limits of the U.S., NATO and the European Union to boost his popularity ahead of the September 2021 legislative election in his country.

Moscow, which granted citizenship to hundreds of thousands of separatists in Ukraine’s Donetsk and Luhansk over the last two years, won’t give up easily. It will keep pushing for the autonomy of those cities through diplomacy or military means.

If Kyiv resorts to military action, the Kremlin will presumably respond, in the name of protecting its citizens in Donetsk and Luhansk, and secure their independence, as a step toward annexation.

It is no secret that the "Eurasianist" faction in Russia wants to cut off Ukraine from the Black Sea entirely. Putin, in turn, assumes that neither Washington nor Brussels will enter a big war with Moscow to defend the Ukrainians.

The Biden administration’s decision to call off the deployment of two warships to the Black Sea, coupled with the U.S. president’s proposal to hold a summit meeting, suggests that diplomacy takes precedence – at least for now.

The United States and its NATO allies, which pledged to withdraw from Afghanistan by September, lack the appetite for a military adventure in Ukraine. Indeed, it is worth noting that Biden tapped a moderate to lead negotiations to kill the Nord Stream 2 gas pipeline between Russia and Germany.

It seems unlikely that Ukraine’s territorial integrity may be preserved, even if that country is admitted into NATO. The Donbass region’s successful secession from Ukraine, however, would be a serious blow to European security.

The sole tool to use

The United States and Europe, nonetheless, can use no other "stick" against Russia except sanctions, to which Moscow has already grown accustomed.

Unless Western governments shake hands on a comprehensive sanctions package – which would hurt, first and foremost, European states due to their dependence on Russian energy – Moscow cannot be forced to backtrack.

Washington, however, may still take advantage of the escalation in Ukraine to twist Germany’s arm over Nord Stream 2.

Simply put, Putin still holds the trump card in the Donbass conflict. The Russian president forced Biden, who called him a “killer” and refused to speak with Moscow, to propose a summit meeting.

Moving forward, the Kremlin will set the tone according to its geopolitical and political calculations.