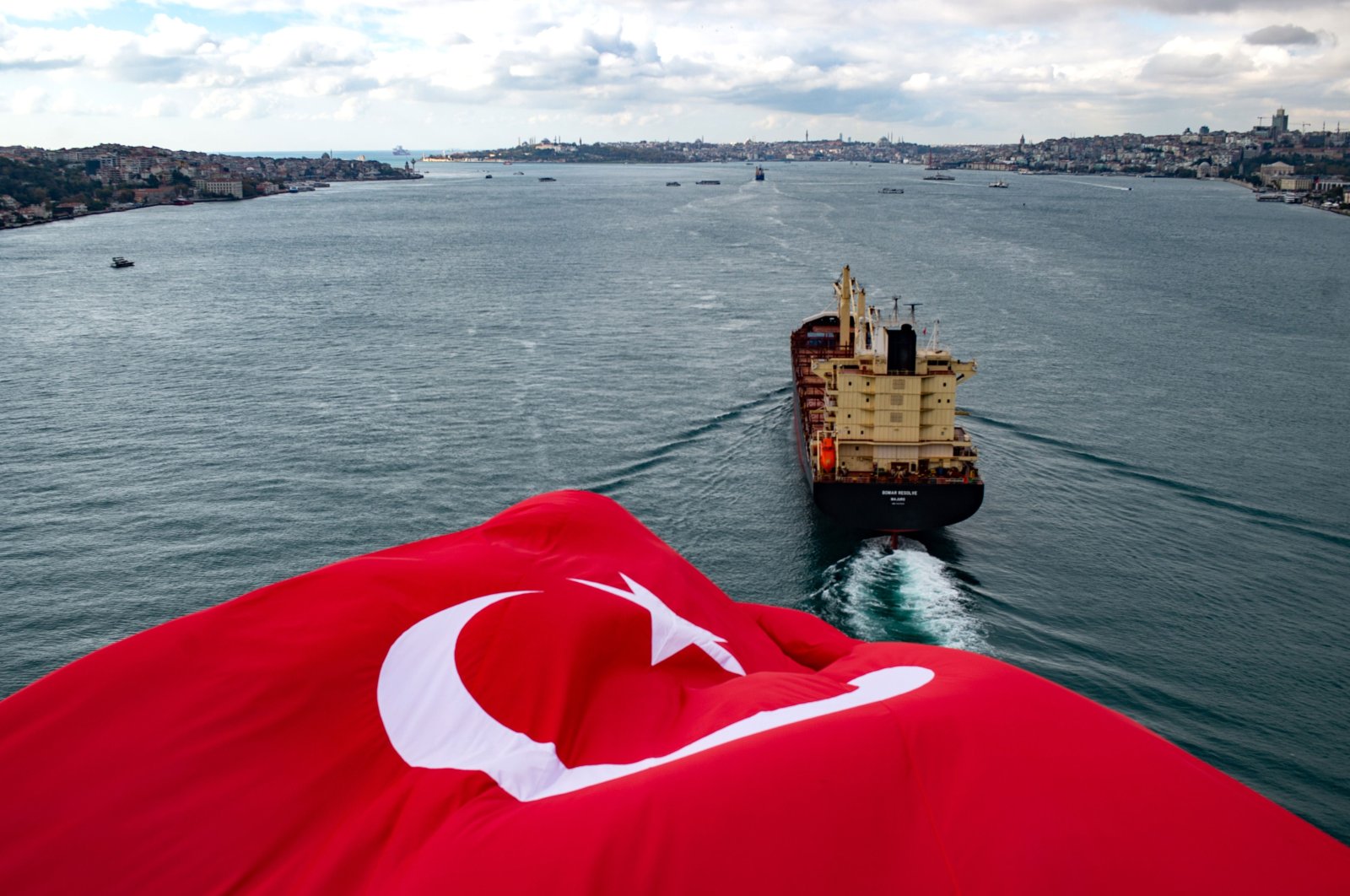 A notable first quarter, shouldered by stronger than expected activity indicators despite the nationwide coronavirus lockdown and the fiscal tightening in recent months, could provide strength for the Turkish economy going forward, according to analysts and surveys.

The current second quarter is expected to come in even stronger as the country is forecast to log double-digit growth, mostly due to a so-called base effect.

In 2021 as a whole, exports could be the driver and help growth to return to around 5% in a strong rebound from the fallout of the pandemic, according to the government and analysts.

Yet, challenges remain, economists warn. Inflation remains high and much could depend on how the pandemic will affect tourism, a critical sector of the Turkish economy, as the country is preparing to emerge from the 2 1/2-week long lockdown just ahead of the summer season.

Data due later this month will likely show the country’s gross domestic product (GDP) grew by up to 6%.

This prospect was further signaled by robust activity indices, particularly the reading on Tuesday that showed that the nation’s industrial output jumped 16.6% year-on-year in March, far exceeding forecasts.

In the first quarter of 2021, industrial production grew 12.3% year-on-year, the data also showed.

It reflected the ongoing rebound despite renewed pandemic measures. Industrial production for the most part was exempt from the renewed measures, which included lockdowns, and thus was not noticeably affected.

Just before the reading was published, the rest of the indicators pointed to a growth of around 5.5% in the first quarter, Alvaro Ortiz Vidal, head of Big Data Research and chief economist for Turkey at BBVA Research, told Daily Sabah.

Treasury and Finance Minister Lütfi Elvan on May 6 said the growth in the January-March period could come at a 5.5%-6% rate, stressing the strong performance of exports and industry.

Elvan particularly stressed the activity rebound in the industrial sector, even suggesting that output and trade were in a better state than during the pre-pandemic period.

The headline Purchasing Managers’ Index (PMI) for the manufacturing sector rose to 52.6 in March from 51.7 a month earlier but was lower compared to 54.5 in January, according to data from the Istanbul Chamber of Industry (ISO) and IHS Markit.

Nonetheless, the reading has managed to stay above the 50 mark that denotes growth.

“The manufacturing sector PMI has been hovering over 50 base values since June of last year,” said Enver Erkan, a chief economist at Istanbul-based Tera Yatırım.

“On the other hand, the contribution of net exports to growth may be more positive as a result of the continuation of foreign demand abroad,” Erkan told Daily Sabah.

Exports from January through March posted a 17.3% year-on-year increase to over $50 billion (TL 417.34 billion), according to Turkish Exporters Assembly (TIM) data, marking the highest first-quarter figure ever. Imports were up 9.7% to $61 billion. The foreign trade gap narrowed 15.2% to $11 billion.

Both analysts at Dutch banking and financial giant ING and BBVA Research pointed out that the stronger than expected March activity signaled further strong GDP growth in the first quarter.

A rebound in activity in the second half of last year helped the economy expand 1.8% in 2020, one of only a few globally to avoid a contraction, thanks to a state lender-led credit boom mid-year.

The current April-June quarter is expected to log double-digit GDP growth due to the base effect after a pandemic-hit 2020, Elvan, Vidal and Erkan said, a prospect also supported by surveys.

A Reuters poll from April 6-13 forecast a 14.9% expansion in the second quarter.

“The information we have for April and May points to a notable acceleration in the GDP growth in the second quarter, above 15%, which of course is highly influenced by the COVID-19 base effect from last year,” Vidal said.

He suggested that the PMI would accelerate again as the European countries are gaining momentum. The headline index reading came in at 50.4 in April.

“In general, we will see a broad recovery in most of the indicators from May to July, to moderate thereafter,” he noted.

The strong momentum so far, favorable base effects and upward revisions in the global growth outlook reinforce upsides risks on the 2021 GDP growth forecast of or even above 5%.

Elvan himself said the economy could expand at a more than 5% rate this year, helped along by export growth of between 16% to 20%.

The Reuters poll shares Elvan’s optimism, with respondents expecting a growth of 4.8% on average in 2021, bolstered by the double-digit growth in the second quarter.

Vidal also sees a similar scenario. He says recent strength in the recovery of Europe, Turkey’s main export market, or an acceleration in the vaccine campaign could yield even more positive results.

Yet, he warned of risks such as deterioration regarding the pandemic or a delay in the recovery of the tourism industry.

“With an extremely positive first half of 2021 (an average GDP growth near 10% during the first half) it will be difficult not to have a high GDP growth rate this year (5% to 6% or higher) even with the expected deceleration during this second half,” Vidal said.

Much depends on tourism

There are some uncertainties that Vidal says can bias their forecast in any direction.

“We expect 5.5% GDP growth, but there are important upside risks that could push the GDP growth figure even above the 6.0%,” he noted.

“On the other hand, a worse than expected result given the recent lockdown in Turkey and/or a delay in the recovery of tourism could lead to a final result closer to 5%.”

The government declared a full nationwide lockdown last month until May 17 to curb rising COVID-19 infections and deaths and help save the tourism season and the flow of foreign currency it brings, which is critical to offset the current account deficit.

The gap came in at nearly $37 billion last year when tourism revenues dropped 65% and visitors brought in only around $12 billion as global travel ground to a halt, down from a record $35 billion in 2019. The tourism industry accounts for up to 12% of Turkey's economy.

The 12-month rolling deficit amounted to some $36.2 billion as of March. An uptick in tourism revenue and exports are expected to narrow the gap in 2021 as a whole.

The country’s top source of visitors, Russia, last month suspended most air travel until June and the U.K. added the nation to its travel red list.

Ankara said Moscow’s decision to halt most flights blocked the plans of 500,000 tourists who had hoped to visit during the April to June period. Turkey welcomed 2.1 million Russians last year and some 6 million in the year before the pandemic.

Though arrivals were down 54% year-on-year in the first quarter, Culture and Tourism Minister Mehmet Ersoy said a sharp drop in coronavirus infections since April 21 was a hopeful sign that lockdown measures were working.

Ersoy said the country would open the tourist season as of June 1 and if the lockdown succeeds in lowering daily cases to below 5,000, they can maintain their target of 30 million foreign visitors this year, twice as many as last.

What analysts agree on is that inflation, which has risen beyond 17% in April to its highest level in nearly two years, would remain the biggest challenge throughout 2021.

Producer prices were up 35.17% year-over-year in the month, from 31.20% in March. Higher producer prices are often passed on to consumers.

“In any case, the base effect guarantees a high growth rate this year, so policymakers should focus on controlling inflation to make the economic growth sustainable,” said Vidal.

The increase in consumer prices was driven by a depreciation in the Turkish lira and pricy commodity imports, pressuring the central bank to keep policy tight.

The Central Bank of the Republic of Turkey (CBRT) held its benchmark policy rate – the one-week repo rate – steady at 19% on May 6 and pledged to maintain its policy stance until there is a significant drop in consumer prices.

Presenting the quarterly inflation report late last month, the central bank estimated that inflation would peak in April and decline to 12.2% by year-end, up from an initially forecast 9.4%. It aims to bring it down to 5% by 2023.

Some analysts also said inflation would peak in April and enter a downward trend in the following months, while others have said it could keep rising into May or even June.

“Considering the increase in global energy and raw material prices and the effects of imported consumption goods prices, it will be necessary to mention an inflation pressure being imported from abroad,” he noted.

“It is understood that inflation is not on a permanent downtrend depending on its main metrics, except for a periodic decrease due to the base effect.”

After April inflation, Erkan said it remains unclear whether consumer prices will see a new peak.

“In this respect, it is a normal and expected situation to continue the tight monetary policy under the current conditions. Permanent and sustainable reduction in inflation should be the main criterion for loosening monetary policy, he added.

Vidal cites two reasons why inflation would continue to be the key challenge.

“First, the actual figure is really high in a world where inflation rates are below 5% even in emerging markets. Two-digit inflation is very worrisome, and at the end of the day inflation is essentially a tax for the poor,” he said.

“Second, it will be difficult to grow at high rates in a sustainable way with high inflation. In this sense, it would be rational to sacrifice some growth in 2021, when the GDP growth rate will be really high, to maintain sustainable growth rates in the next years,” Vidal concluded.