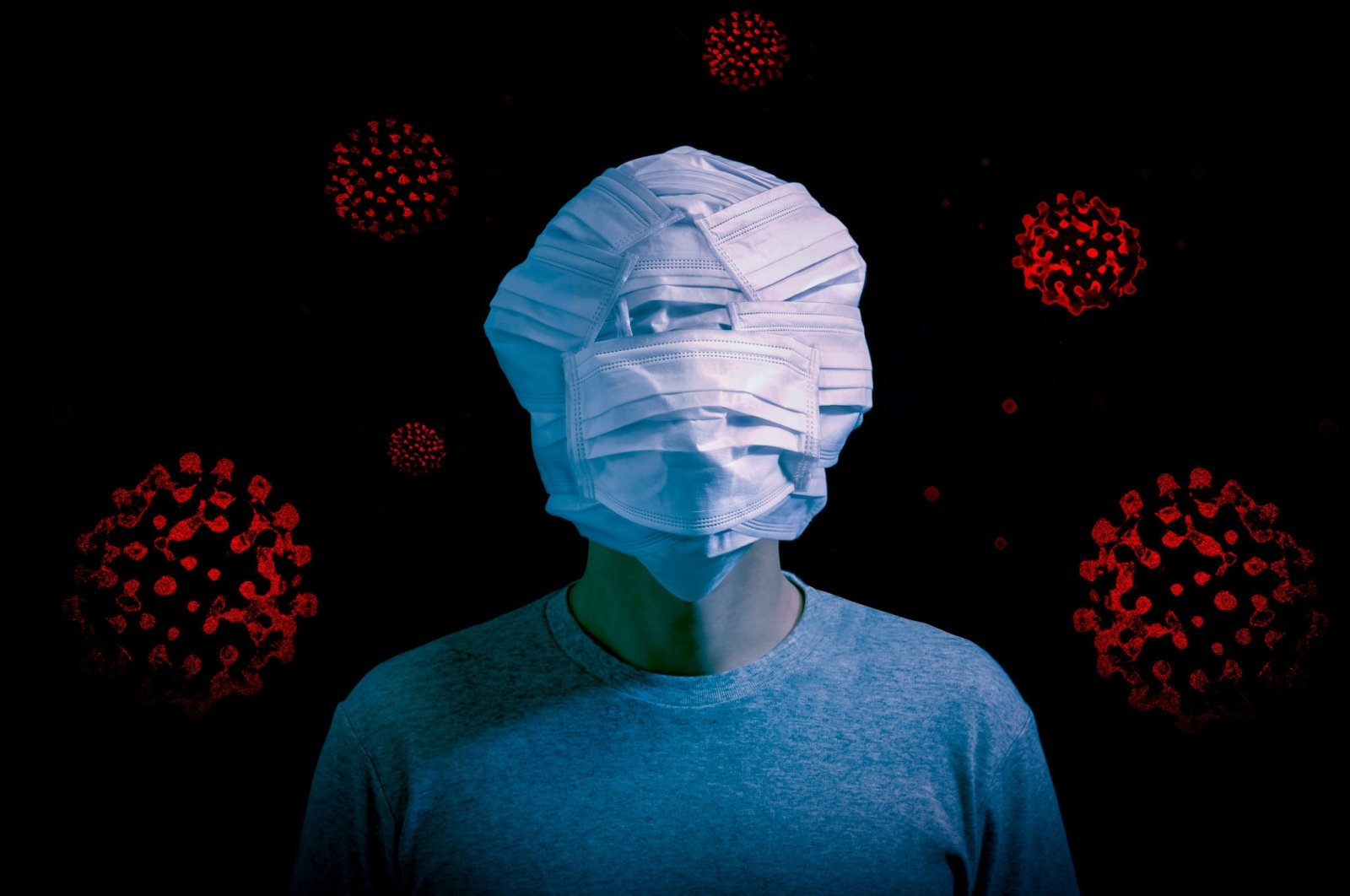 The year 2020 was undoubtedly dominated by one singularity – COVID-19 pandemic.

However, along with the coronavirus outbreak many other consequential events unfolded this year, and below we listed some of them.

After remaining one of the few coronavirus-free countries in the world for weeks, Health Minister Fahrettin Koca announced Turkey's first COVID-19 case on March 11, and a week later reported the first death.

Italy, which was the first Western country to be severely hit by the pandemic, was also the first to announce a nationwide lockdown starting March 10 in bid to stem the spread of the disease.

3. Importance of wearing a mask right

Despite it being declared mandatory to wear a face mask – and properly at that – in all public spaces across Turkey, especially in public transport and in supermarkets, we have seen and continue to see rather bizarre interpretations of ways to wear a face mask.

4. Turkey's cologne culture and bidets vs. virus and hoarding

Turkish people's affinity for cologne, aka "kolonya," proved to be crucial in the midst of the coronavirus pandemic, as it serves as an excellent preventative measure in spreading viruses and bacteria. Turkey also did not suffer from the toilet paper hoarding craze that hit most Western countries in the beginning of the pandemic thanks to a tradition of using toilet bidets.

Spearheaded by Dr. Uğur Şahin and his wife Dr. Özlem Türeci, German pharmaceutical company BioNTech developed an experimental vaccine together with its American partner Pfizer. Both Şahin and Türeci were born to immigrant parents from Turkey who moved to Germany in the 1960s.

Since May, Chinese and Indian troops have engaged in aggressive melee, face-offs and skirmishes at locations along the Sino-Indian border. On June 16, 20 members of India’s armed forces were killed in one of the violent face-offs in the northern Himalayan region of Ladakh. The military tension then turned into diplomatic and economic confrontation.

The death of George Floyd brought under the spotlight similar incidents of police brutality, growing racism and discrimination against all ethnic and religious groups as protests erupted all around the world.

Catastrophic bushfires caused "extensive damage" across swathes of Australia in early 2020, killing dozens of people, destroying property and threatening flora and fauna. Meanwhile, in August on the other side of the Pacific, unprecedented wildfires raged through the West Coast of the United States.

On Jan. 3, a U.S. airstrike outside Baghdad, Iraq, killed several Iraqi and Iranian military officials. One of them was the second-most important leader in Iran, Gen. Qassem Soleimani. Five days later amid heightened U.S.-Iran tension, the Iranian military downed a Ukrainian passenger plane, killing all 176 people onboard.

A massive explosion rocked Beirut on Aug. 4, flattening much of the city’s port, damaging buildings across the capital and sending a giant mushroom cloud into the sky. More than 200 people were killed in the huge blast.

Israel and the United Arab Emirates (UAE) reached a historic deal that would lead to a full normalization of diplomatic relations between the two Middle Eastern nations in an agreement that U.S. President Donald Trump announced on Aug. 13. Israel and the UAE along with Bahrain signed the so-called Abraham Accords in Washington, D.C., on Sept. 15. On Oct. 23, Sudan became another Arab country to normalize ties with Israel, followed by Morocco on Dec. 10.

A series of deadly attacks hit Europe in 2020. In February, a far-right extremist killed 10 people, including five Turkish citizens, in the German city of Hanau. On Oct. 29, three people were killed in a stabbing attack at Notre-Dame de Nice in the French coastal city of Nice. Four days later, a lone gunman opened fire with a rifle near a synagogue in Vienna, killing four people.

The Turkish Republic of Northern Cyprus (TRNC) on Oct. 8 partially opened public access to the town of Varosha (Maraş), which was abandoned for the past 46 years, in a move welcomed by Turkey and criticized by Greece.

Thirty-six Turkish soldiers were killed in a Russian-backed airstrike by the Bashar Assad regime in northwestern Syria's Idlib in late February. In the aftermath of the attack, Turkey opened its borders to refugees headed to Europe and launched Operation Spring Shield against the Assad regime.

17. Hagia Sophia reverted back to mosque

Turkey’s iconic Hagia Sophia Grand Mosque reopened for worship on July 24 for the first time in 86 years with four muezzins from the mosque's four minarets reciting the adhan, or call to prayer, and people performing their Friday prayers. On a sadder note, Gli, the Hagia Sophia Grand Mosque's favorite feline resident, died at the age of 16 on Nov. 7.

A massive earthquake with a magnitude of 6.8 struck the eastern Turkish province of Elazığ on Jan. 24, killing at least 41 people and injuring 1,607 others.

The deadliest earthquake of 2020 hit western Turkey's Izmir province on Oct. 30, resulting in the deaths of 117 people. In the aftermath of the tragedy, the miraculous survival of several infants and animals has provided a bit of solace for a shaken public.

Eleven people died in flash floods that hit the Black Sea province of Giresun in northern Turkey in late August, sending torrents of water roaring across the region.

On Oct. 24, Erdoğan said his French counterpart Emmanuel Macron needs “mental treatment” because of his hostility toward Islam, as already tense Turkish-French ties hit a new low. Before Macron's crackdown on French Muslims Ankara and Paris have been in a strong disagreement on a range of topics, including Nagorno-Karabakh, Syria, Libya and the Eastern Mediterranean.

On Nov. 26, a court in Ankara handed down aggravated life imprisonment for 310 military officers and civilians who were involved in the FETÖ terrorist group's 2016 coup attempt, at a trial on the putschists' actions at Akıncı Air Base.

The 2020 Tokyo Games were postponed to 2021 over COVID-19 pandemic, marking the first time the Olympics could not take place on schedule in peacetime since the first games were held under the auspices of the International Olympic Committee (IOC) in 1896.

25. Maradona dies at 60 after heart attack

Argentine football legend Diego Armando Maradona died at age 60 as a result of a heart attack on Nov. 25, sending the whole football world into mourning.

Kobe Bryant, the 18-time NBA All-Star who won five championships and became one of the greatest basketball players of his generation during a 20-year career spent entirely with the Los Angeles Lakers, died aged 41 in a helicopter crash on Jan. 26. His daughter Gianna Maria-Onore was also among the victims killed in the crash.

Lewis Hamilton clinched a record-equaling seventh Formula One title on Nov. 15 after winning a wet and gloomy Turkish Grand Prix that marked the sport's first return to the country in nearly a decade.

Istanbul Başakşehir won its first-ever Süper Lig championship in July, becoming only the sixth team in the league’s history to win the title.

Liverpool ended a 30-year wait for the English title when it was crowned Premier League champion in late June, triggering jubilant scenes of wild celebrations.